The Senseless Killing Of Will Smith

Life is a precious thing. One minute you can be living, breathing and laughing. The next minute you could be lying dead after leaving the Earth. Unfortunately, former New Orleans Saints defensive end Will Smith’s life was not valued by Cordell Hayes on Saturday night. Smith and his wife were driving when Hayes rear-ended Smith. Hayes and Smith got into an argument and as a result of that argument at that traffic accident, Hayes shot Smith multiple times and shot Smith’s wife, Raquel, twice in the leg. Will unfortunately did not survive while Hayes reportedly waited for the police to get there. From the reports, Hayes will be charged with second-degree murder for the death of Smith. But what appeared to be a traffic accident argument go wrong could be anything but.

Back in 2005, Hayes’ father, Anthony, was killed by the New Orleans police. According to the New Orleans Advocate, the elder Hayes apparently got in an argument with an employee at a pharmacy store and was pepper-sprayed, shot and killed. In the lawsuit, a police officer named Billy Ceravolo was mentioned. Ceravolo apparently was one of the officers that fatally shot Anthony Hayes back in 2005. The younger Hayes filed a lawsuit in regards to his father’s death against the city of New Orleans. The result of the lawsuit was a settlement was reached for an undisclosed amount of money back in 2011. Flash forward to now and Will Smith and former Saints running back Pierre Thomas were out with a retired commander from the New Orleans Police Department. The retired officer’s name was Billy Ceravolo. And apparently Smith and Thomas were friends with him. So what seems like a random shooting may have been one that was an act of revenge. Although one question still remains regarding Hayes’s actions. 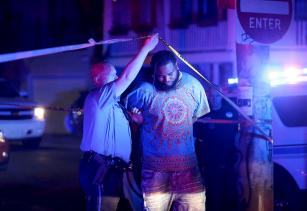 Hayes fatally killed Will Smith and wounded Smith's wife, but they were not the ones that killed his father. In fact, they were not even involved in that whole incident. The only thing Smith was guilty of was being a friend of Ceravolo. And that is no crime at all. If he really was trying to get some revenge, then why didn’t he go after the officer he felt killed his father? That question is one that only Hayes can answer at this point. But looking at his mug shot, the man showed no remorse and he never left the scene of the shooting. That essentially tells me that he wanted to be caught and knew what he was wanting to do. The only thing that makes any sense is that Hayes may have wanted Ceravolo to feel some of the same pain he did. From the sound of things, Hayes had a good relationship with his father or felt strongly about him and was still hurt about his killing at the hands of the police. As far as why he pointed out Ceravolo and not other officers is unclear at this time. But in killing Smith, he took one of his best friends away. And essentially, he killed someone that did not even fit in the equation of what happened to his father.

The person who will have the most to put back together is Racquel Smith. From all reports, she is going to recover and live. But that fatal night in New Orleans will live with her forever. On Saturday night, her and her husband were just out to enjoy a night of hanging with friends and enjoying some good times. But they not only did not make it home together, but she lost her husband on the way home. But not only did she lose her husband, but a father to their kids (three altogether and two between both of them). The amount of pain that she is going through right now cannot be measured. Hopefully her family and friends are around her to help her through this troubling time. There will be some rough times and some good times, but hopefully time can help her recover from this horrific incident.

Will Smith was husband, father, football player and friend. But now all that has been taken away from us as a result of Hayes and his uncontrollable rage. And because of that, three kids are now fatherless and a woman is now left to raise her kids without their father. As far as Hayes, he is going to at least be charged with second-degree murder (could be bumped to first-degree murder is the premeditation is proven with all the facts). Apparently for him, he was willing to give up his freedom to kill someone that was not even involved with the killing of his father. Some can say this was not premeditated, but it’s quite hard to say he just bumped into Smith and decided to kill him not knowing the connection of his friend to the shooting of his father. The loss of his dad was tragic, but now he has given Smith’s kids the same fate that he had been given over a decade ago. And it was all a senseless crime to begin with. Rest in Peace William Raymond Smith III. Gone too soon.