The Vikings Showed Us Some Things About The Cowboys

The Cowboys have been having a great season. Behind that offensive line and with two rookies in starring roles, the Cowboys offense has been excellent all year. And as far as the defense, the Cowboys have been making it happen there with their relentless effort to make plays. Heading into Minnesota, there were some that thought the Vikings could pull off an upset. And with the way this game went, the Vikings definitely gave themselves a great opportunity to win the game. But unfortunately for them, they came up just two points short. They Vikings scored late in the fourth quarter, but they were not able to complete the two-point conversion as they lost to the Cowboys at home 17-15. And with that, the Cowboys are now 11-1 and coasting into the playoffs as the number one seed. Of course there was controversy after the game, as Vikings quarterback Sam Bradford was hit in the head during the two-point conversion, but it was not called and that is just the way it went. The Cowboys may have won the game, but the Vikings helped show a few things to teams that are trying to figure out how to beat the Cowboys.

One thing that Minnesota did well in this game is they were able to take away the running game. Aside for one two runs of 30 and 12 yards, Elliot was limited to only 18 carries for 44 yards, which is an average of only 2.4 yards per rush. What the Vikings did was they made plays in the running game against the Cowboys up front to hinder the running game. Against that dominant Dallas Cowboys offensive line, that was something that many thought was not possible. But the Vikings made it happen and were able to get to Elliot before he really was able to get going out of the backfield. And with that happening, the Vikings made the Cowboys rely more on the passing game. While the Cowboys were able to pull some plays out in the passing game, they seemed to not be comfortable in that type of gameplan. Of course, some of the things that happened in this game in terms of the penalties and mistakes were self-inflicted. But also you have to give credit to the Vikings front seven for fitting in the gaps and making sure to keep the integrity of their defense.

The Vikings were strong against the run, but they were also good in how they handled passing situations against the Cowboys for the most part. Dak Prescott was solid in the passing game, going 12/18 for 139 yards and a touchdown, but if you take away one throw of 56 yards to Dez Bryant, he only threw for 83 yards the entire game. One big reason that happened is because of the Vikings front four. The Vikings team in general does not blitz much at all. They tend to get pressure on the quarterback through their defensive line. And in Thursday night's game against the Cowboys, that is exactly what they did. The Cowboys offensive line was not able to hold them out, as they forced Dak to get rid of the ball a little quicker than he wanted to. And for those times that Dak was not able to get rid of the football to his outlet, the Vikings were able to get to him. The Cowboys allowed three sacks and one of them included Dak Prescott fumbling the football for a turnover while being sacked. In only having to send four to get to Prescott, the Vikings were able to put more into covering the Cowboys in their passing game and in turn limited the outlets that Prescott had to throw the ball to.

Not every team has a defense like the Minnesota Vikings. But in this game, they helped lay out a gameplan that could help keep the Cowboys offense under wraps. Of course, there were penalties that kept the Cowboys down offensively, but you have to give credit to the Minnesota defense for what they were able to do in this one. While this gameplan may not be one that all teams can stick to, it is one that is possible and it shows that the Cowboys can be had offensively. And as we all saw, the more the offense struggles, the more it affects the whole gameplan the Cowboys have for their whole team. It will be interesting to see if someone can duplicate what Minnesota did. 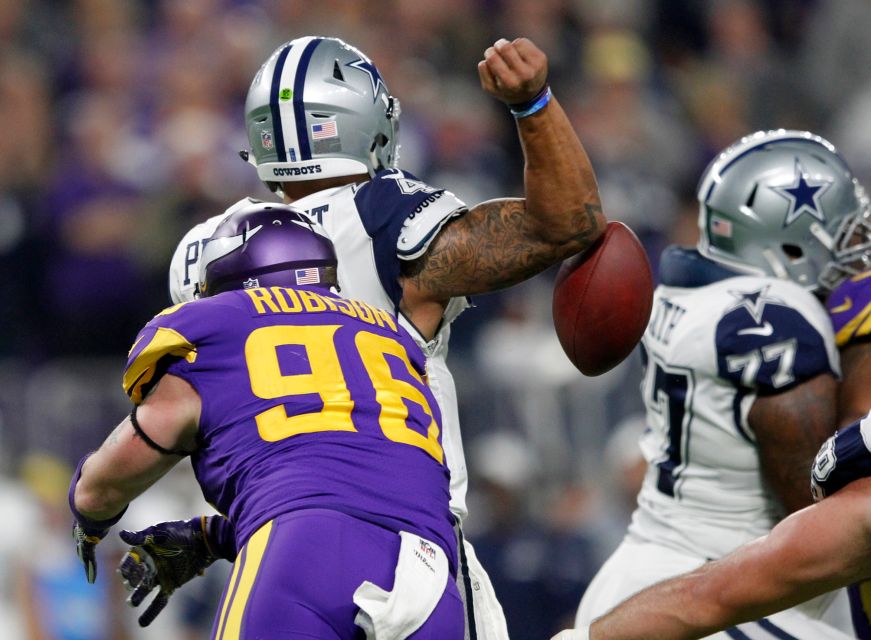