The Cincinnati Bengals were the pick by many to win their division. Despite some losses on both sides of the football, they still were looked at as a team that had all the pieces to win like they did last season. So imagine the surprise of many with how they started. The Bengals went to New York and beat the Jets to start the season, but they promptly lost two straight when facing off against the Pittsburgh Steelers and Denver Broncos. Heading into Thursday night's game, the Bengals needed to right the ship. They were playing on a national stage against the Miami Dolphins and needed to get to 2-2 on the season. And with the way they played, you definitely saw the effort and enthusiasm they had to win the game. The defense was solid and tormented the Dolphins offense all night long. And Bengals wide receiver AJ Green was dominant against the Dolphins secondary as expected. But even with the win, there seemed to be something missing. The Bengals were clearly the better team, but you can tell they are missing one piece that makes them even better.

Bengals tight end Tyler Eifert was a breakout star last season for the Bengals offense. He ended up having 52 receptions for 615 yards and 13 touchdowns as he was a very important piece of the Bengals offense. He did so well that he made the Pro Bowl last season and actually played in the game. But that is where his trouble started. He injured his ankle in the game and is slowly trying to work his way back to being healthy again. And with his presence not there, you can see where he is missed. The first area is the third down effiency. We saw Thursday night the issues that Cincinnati has in converting third downs. They were under 30% Thursday night, which marked the second time that has happened for them this season. And the gameplan is easy for those that are defending the Bengals: take away AJ Green and make others beat them. Now AJ Green still had an excellent game, but on the third downs, he was not found a lot. Green would still be receiving a lot of attention on third downs, but Bengals quarterback Andy Dalton would have another dependable outlet that he could trust if Eifert was there. Instead, he is working with guys that are new to him this season and he has to build rapport with. And that has helped lead the Bengals to a 30.8% conversion rate on third downs, good for 26th in the NFL.

But not only is he missing in third-down conversions, but in the red zone as well. The Bengals were in the red zone a few times on Thursday night. But instead of converting most of them into touchdowns, they were only able to get Mike Nugent field goals. That was able to work in taking care of the Miami Dolphins. But in order for them to take care of the better teams in the NFL, that is totally unacceptable. With Eifert out there, that becomes a huge target for the Bengals in the redzone. And that also will take some attention away from Green. Eifert is big enough and tall enough to cause defenses serious issues up the seam inside the 20 yard line. Cincy is one of the worst teams in the NFL this year with conversions inside the 20s and that has to change for them to really be considered a contender. They have to learn to finish this year and Eifert is a huge part of them getting back on track there.

The Bengals have survived the loss of Eifert so far. But the points left on the board and coverage slanted towards Green will eventually weigh down that offense if Eifert does not return soon. And if that happens, then the Bengals may be in a little bit of trouble. Their defense is very solid, but that is a lot to throw on their shoulders, especially for a team that is trying to make the playoffs and win the Lombardi Trophy.

The high hopes the Bengals have are still there. They are still fighting for their division and there is no need for them to worry at about figuring it out as a team. But one thing the Bengals have to worry about is how soon they will get Eifert back. He is a key to not only how they do in the regular season but how well their offense performs and puts points on the board. Offensive efficiency is evading the Bengals. Hopefully the presence of Eifert will help make that happen. 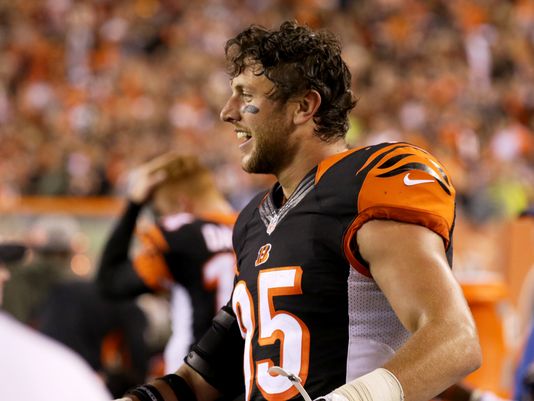