The Titans Showed Some Mental Toughness

Heading into last week, fans of the Tennessee Titans were cautiously optimistic. The team has noticeably gotten better, but the Titans had been known for giving their fans hope only to take it all away. But instead of doing just that last week versus the Denver Broncos, the Titans went out and were able to get ahead of the Broncos and hang on for the 13-10 win. And with that win, the hope for more was increased. But that hope for more wins had a tough task coming up in Week 15. The Titans had to head to Kansas City to take on a hot team in a cold city. The temperatures were expected to be in single digits as the Titans traveled to Kansas City to take on the 10-3 Chiefs. The odds were definitely stacked against the Titans going into Arrowhead stadium in December. And there were certainly some things that did not go the way of Tennessee during the game. But at the end of the day, the Titans were able to pull out the win and improve to 8-6, which has them tied for first place in the AFC South. Some wonder how the Titans were able to do this and how they have turned it around so quickly. Well, there is one thing that they have this year that they did not have last year: mental toughness. And that mental toughness was on full display in this win versus the Chiefs.

The Titans came out a little slow in this game. They started with an opening drive that failed after an initial first down. And when the Chiefs got the football, they knew exactly what to do with it on their first drive. On the second play of their opening drive, they handed the ball to wide receiver Tyreek Hill. And Hill proceeded to cut through the Titans defense like a hot knife through butter on his way to a 68 yard touchdown. The Titans would go on to give up another touchdown drive in the first half, as Alex Smith scampered for a ten-yard touchdown run on third down to give the Chiefs a 14-0 lead. At that point, things were not looking good for the Titans and they could have easily folded. But the Titans instead decided to fight back. The defense bowed up for most of the rest of the game and only allowed three points the rest of the game (none in the second half). They stopped the Chiefs on a goal-line stand and also forced Chiefs quarterback Alex Smith into a redzone interception, essentially saving potentially ten points from being scored. And when it really counted in this game and the team was down a point, they were able to make a stop that gave the ball back to the offense for what ended up being the game-winning drive. That mental toughness shown by the Titans defense while the Titans offense was getting themselves together was evidence of things that a contending team does.

But the Titans defense was not the only side of the ball that was mentally tough. The Titans offense was sputtering in the first half to say the least. The offense was sorely out of rhythm early in the game. They could not consistently put plays together and that led to them being down 14-0. And early on, the Titans struggled to convert on third down, completing under 25% of their first down opportunities early on. But instead of allowing that along with an early turnover to affect them, the Titans just kept plugging away. And although they collected two more turnovers, they were able to come back in this one and make a game of it. They would go on to score with nine points in the fourth quarter, bringing them within one point after they failed on a two-point conversion. And after a huge stop the next series, the Titans were able to drive the ball deep enough to give kicker Ryan Succup a chance to kick the game-winning field goal. And to Succup's credit, he was able to hit the kick to send the Titans to a win. The offense could have mired in the misery they were playing in. But instead of doing that, they kept trying and eventually they broke through, scoring twelve of their nineteen points in the fourth quarter.

Up next for the Titans are the Jacksonville Jaguars, who just fired their head coach, Gus Bradley, after their loss Sunday versus the Houston Texans. And if the Titans win that one along with the Texans beating the Bengals, then we could see it all come down to the last week of the year for the AFC South crown. For the Titans, that would be something huge for them to win this division after all the losing over the years. But that first step towards a Week 17 challenge has to be taken care of first, as Mike Mularkey visits a place where he was once head coach before. 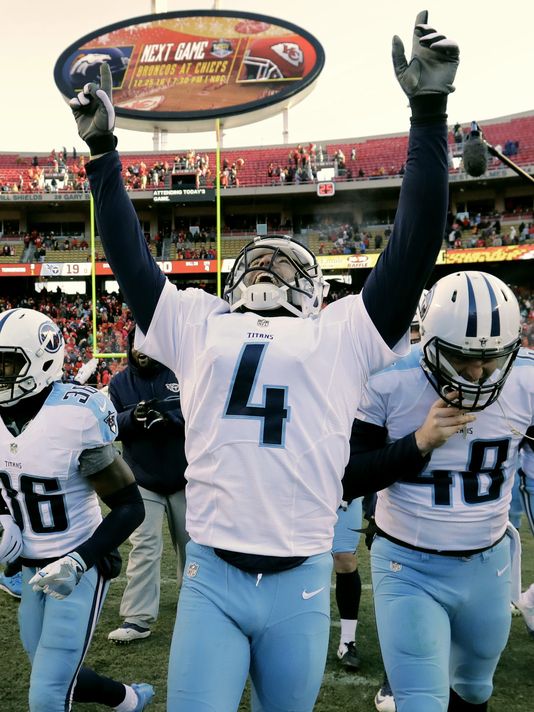