The Titans had won three of four going into their game this past Sunday. They were running the football well and were making things happen defensively. It finally seemed like they were getting an identity on both sides of the football. And for fans of the team, the momentum was starting to move in the right direction. Granted the wins they have had were against teams that are considered not very good, but the level of expectation was rising. And in this game against the Chargers, the Titans had a chance to validate themselves not only for a potential playoff run but to their fans. Many fans with the Titans have been looking for something to hang on to with the team. A few years of disappointment will have a fan base feeling that way. And after the game this Sunday, the Titans will continue leaving their fans looking for that moment to signal they are ready to compete for the playoffs again. The Chargers beat the Titans 43-35 in San Diego, dropping the Titans to 4-5 and continuing the woeful results the Titans have had against the Chargers in San Diego. And once again, the feeling surrounding the Titans has gone from hopeful to doubtful.

Coming into this game, the Titans had been running the football well. DeMarco Murray was the second-leading rusher in the NFL and the Titans offensive line had been blowing opposing defensive lines off the line of scrimmage. In this one, the thought was the Titans would come in and set the tone with the running game and work on everything else around that. Well, that isn't exactly what happened in this one. The running game was non-existent the entire game. Murray was not as effective in this game. After averaging 4.7 yards per game for the season, Murray only averaged 3.6 yards per carry in this game. And to top that off, the veteran running back only got 14 carries in this one. The Titans failed to rush for over 10o yards as a team and that ultimately put them in position to have to throw the football more, which is not what they want to do. As a result, the Titans offense did not look the same and was out of their comfort zone.

But this loss did not only have to do with the offense, but the defense as well. Tennessee has been pretty solid against the run this season. And when they are able to force opposing offenses into difficult downs and distances, then they can impose their will on you and release their pass rush in more predictable downs. That combination of stopping the run and bringing pressure has helped make them successful and mask their slower secondary during the season. But in this game, the Titans were not able to contain the run. Second-year running back Melvin Gordon torched the Titans today to the tune of 196 yards on 32 carries (6.1 yards per rush). And with him doing that, Rivers could do whatever he wanted to in the passing game. Rivers would pass for 275 yards and two touchdowns. And along with the touchdowns and yardage, he completed over 70% of his passes. That ties directly in the Chargers playing ahead of the sticks in the running game and that allowed the Chargers to keep the Titans defense off balance.

The season is not over for the Titans, but this loss does not help how they are viewed right now by their fans. And with the Titans hosting an angry Green Bay Packers team next week and facing divisional foe Indianapolis the week after, the time for making a run for the playoffs is running short. Next week will just became that much bigger for the Titans. For their sake, they better hope the results next week are better than they were this past Sunday. Because if those results don't change, then the Titans will slowly but surely dig their grave for the rest of the 2016 season. 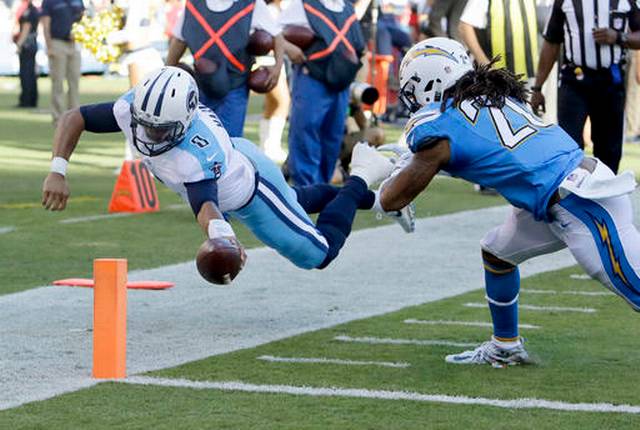