Can We Get A Terrell Owens And Chad Johnson Show Somewhere?

There are plenty of athletes that hang on too long to the spotlight. And when that happens, whether they are on or off the field or court, they tend to wear themselves thin with the people that follow them. And eventually, more people are waiting for them to leave the entertainment world all together. But there are others that can actually stay entertaining no matter how long they have been doing it. There is only a special group of people that can do that and they are on television right now expect for two of them. Chad Johnson and Terrell Owens have been away from the game for some time now. Both were great characters to watch at times and were frustrating to keep up with at others. But no matter of what all they did, they garnered the attention of people watching the games. And even though both are not playing anymore, they are still very entertaining as evidence by this appearance on His And Hers on ESPN today (fast forward to the 12:56 part of the clip where Johnson and Owens make their appearance):

Both Johnson and Owens seem to be naturals with a microphone or camera in front of them. Maybe some of that comes with what all theatrics they did on the field. T.O. and Chad Johnson both had some great endzone dances as shown here:

Even though you may not have liked these two with their celebrations in the endzone, you have to admit you watched to see what they were going to do next. And being that they probably knew that, they both were more than likely at their homes perfecting any endzone dance they did. With the preparation they put in on the field to win games and at home to look good in the endzone, there is no doubt in my mind that they could put this type of preparation into doing a show together. Both have chemistry and are friends so that would make it that much better and easier for them to vibe off each other and make a hit show.

But along with the entertainment value, there is always a negative. Both were perceived as being players that were about themselves when they played. And although both are pretty smart guys and can talk about any sports topic, they can tend to take some wrong turns when talking. And it is because of that, many stations or networks could be afraid to let them on the airwaves or television. Essentially, they could be great or a trainwreck depending on how they were both feeling about certain things and topics they would discuss on their show. The glue that would keep both these guys on track would be a host that can balance them both out and keep them in line. In having that person, they could keep the show on track. That person would also have to be someone that is not a pushover and that can command the respect of both T.O. and Chad Johnson as well. Because if they don't respect the host, then they will run him or her over and the show will be over before it gets started.

Both Johnson and Owens have been media lightning rods for practically their whole careers. So why not parlay that into a show? Both have had financial struggles and a show could help alleviate some of what has happened to them financially. We know they both are friends and former teammates, but why not partner up and get money together while talking sports. They seem like naturals for it. They just have to learn the ropes there and have someone guide them through. 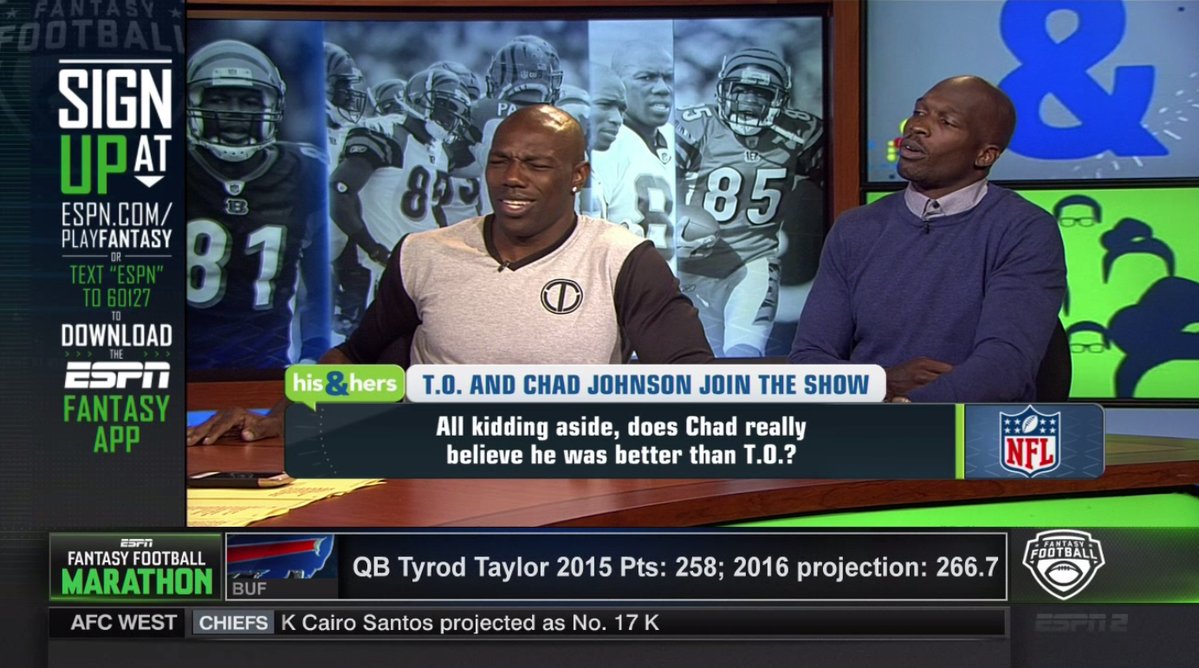