The Tennessee Titans Go Back To The Future On Offense

The Tennessee Titans had two huge decisions to start the offseason. Tennessee had an open general manager position and they also had a head coaching position that was not filled. After looking at many candidates, the Titans decided to bring in Tampa Bay director of player personnel Jon Robinson as their new general manager. That move was accepted with some skepticism and optimism as well. But the big decision that loomed large was the head coaching position. Would the Titans go out and make a splash or would they do something that many fans might not agree with? After their extensive search, the Titans ended up bringing back interim head coach Mike Mularkey to commandeer the team. Immediately, that move was met with the frustration of the fans of the team. Many looked at the move as the Titans just settling and not taking a chance to get better. Whether fans liked it or not, the pairing of Robinson and Mularkey was here to stay. And being that Mularkey is an offensive-minded coach, many wonder what he has in store for the offense. Well, from his hiring until now, that vision has gone from cloudy to crystal clear.

The vision began to take shape when the Titans made a couple offseason moves that many did not expect from them. The first one when they added DeMarco Murray via trade. The veteran running back did not have quite the impact he expected in his lone season in Philadelphia. But in Murray, the Titans upgraded their offensive weaponry while adding a running back that is known for his downhill, physical style. The move for Murray was one that was greeted with some skepticism and some optimism. On one hand, he is physical back and those who know Mularkey knows he likes a physical back that can inflict punishment in his run-oriented offense. But on the other hand, the Titans did not have anyone to block for him at that time. So naturally, there was some waiting on the next move to see what Robinson would do next. And with the next move, the foundation seemed to be coming together on his plan. The Titans went out and signed center/guard Ben Jones from the Houston Texans. He was one of the main components in the Houston offense in terms of their running game the last couple of years. And in bringing him to Nashville, the Titans added someone that could help them establish more of a physical presence. But who would know that this was not the end for this offense.

The Titans entered the NFL Draft wanting to get more linemen. They added Jones, but Robinson knew that was not enough. After trading from the number one pick to get additional picks, the Titans went and got as many physical guys as they could for their offense. And when they saw their first target they wanted in the first round, they traded up from the 15th spot to go get Michigan State offensive lineman Jack Conklin eighth overall. When asked about Conklin, Fox Sports NFL broadcaster Charles Davis had this to say: “He is a big, bruising, brawler type that can fire off and go get someone. If you get in a fight in a dark alley, you want this guy with you.” Needless to say, Conklin is a physical presence when he is on the court. And he is not looking to take on the pain but inflict it to someone else. And in addition to Conklin, the Titans went out and got another guy that is physical, but physical in the running game. With one of those additional picks, the Titans were able to select Alabama running back Derrick Henry. The reigning Heisman Trophy winner is one huge man, standing at 6’3” and 242 pounds. But along with that size comes the speed, running a 4.54 40 time. For his size, that ought to be illegal. Charles Davis was very complementary of the Hulk-sized running back: “He is a physical specimen and has lots of speed and power. Some actually feel that he can be even more physical at the next level. And he is also a downhill runner, which could fit into what they (the Titans) are doing.”

In those four players the Titans added, the mission was simple: let’s get physical. But not only did the Titans want to get physical, they wanted to protect their quarterback as well. “It all comes back to Mariota,” says Davis. “He got hit a lot last year and that was part of the reason Ken Whisenhunt was let go. Amy Adams Strunk (Titans controlling owner) saw Mularkey’s plan and him wanting to protect Mariota. And that is a big reason that he was retained as the head coach.” The franchise is definitely Mariota’s to run, but the Titans want him upright to do so. And with the pieces they added, expect the Titans to play a more physical brand of football, which is more to the liking of Mularkey. He now has two backs in Henry and Murray to be physical and run the ball downfield with behind Jones, Conklin and the rest of the Titans offensive line. And when they run the football well, that will open up the play-action passing game for Mariota to find guys like tight end Delanie Walker and wide receiver Kendall Wright. The transition to a physical offense is pretty much complete. Expect the Titans to run the football majority of the time next year under Mularkey. If you take a look at this offense, they now loosely resemble the most successful team the Titans ever had, the 1999 team. That team went to the Super Bowl behind a physical offensive line, downhill running by Eddie George and a trusted security blanket for McNair in tight end Frank Wycheck. Now we know this team still has to prove itself, but the offense is something that could make some believers out of those that don’t believe in them. Welcome to Bludgeon Ball ladies and gentlemen. Get ready to see the Titans get back to that physical offensive play they were known for once upon a time. 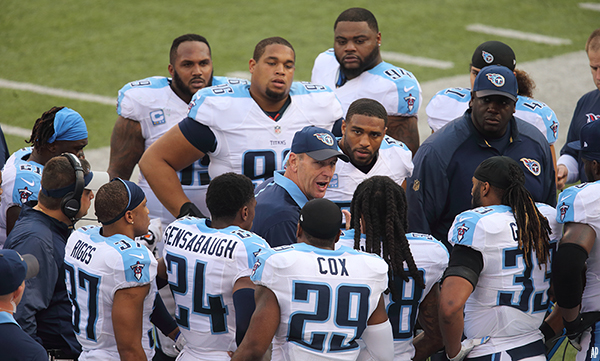