The Tennessee Titans Fail Against The Colts Again

The Tennessee Titans started the season rough, losing two of their first three games. But after back-to-back wins against the Miami Dolphins and the Cleveland Browns, the Titans pulled even at 3-3. And not only did they pull even with their record, but there was some buzz about them around the city of Nashville, Tennessee, where the Titans call home. But that enthusiasm was tempered by many because they knew what awaited for them after the Cleveland win. The Indianapolis Colts had beaten the Tennessee Titans nine times in a row heading into Sunday and they have essentially owned them. But this year looked to be a little different. The Titans were playing well and the Colts were coming off an inexplicable loss to the Houston Texans where they just folded in the fourth quarter down the stretch. The scene was perfect for the Titans to jump the Colts while they were down. But unfortunately, the Titans were not able to take advantage of their opportunity. The Colts started fast and were able to make enough plays late in the game to beat the Colts and remain ahead of Tennessee in the AFC South and win their tenth straight against the Titans. And after this one, the good feelings that Tennessee had coming into this one went back to a little trepidation. Although there were many things that cost the Titans the game, there were two series in particular that hurt them in the fourth quarter.

The Titans defense was getting lit up in the first half by Andrew Luck. He was beating them short, deep and long with weapons like tight end Jack Doyle, running back Frank Gore and wide receiver T.Y. Hilton. And there just seemed like there was nothing the Titans could do about it. In the second half, they slowed down Luck and the Titans were able to get the lead. But in that moment they took the field with that lead, it seemed that Andrew Luck honed into his razor-sharp focus that he had earlier in the game. Luck would complete some big passes to wide receiver Devin Street and the aforementioned Doyle, but the biggest pass he would complete was on a third and thirteen. The Titans were more efficient for the game on third-down conversions (Titans completed 60% of their third downs compared to the Colts' 40%). But on that one third down late in the fourth, Luck found Street wide open for twenty yards down to the Titans eight-yard line. The Colts would score four plays later, but that one huge third down conversion negated all the other third-down stops the Titans had during the game. The defense just could not get the big stop when they needed it.

On the other side of the ball, the Titans were not bad offensively. They stuck to their gameplan and were able to run the football when they wanted against the Colts. And when the Colts went up at one point 20-13, the Titans answered with ten straight points, taking a 23-20 lead in the fourth quarter. But once again, the Titans made that crucial turnover that prevented their comeback. Down 27-23 after Luck's big drive, Tennessee quarterback Marcus Mariota dropped back to pass and get the Titans down the field. He had under two minutes to get the Titans down the field to get a score. The usual thing for most offenses in this situation is to try and eat up defenses on the underneath throws while taking advantage of the opportunities that the defense provides. But in this instance, it seemed that Mariota was looking to get a big play and held on to the football in the pocket a little too long. So instead of him getting rid of the football, he was stripped of the ball and Colts defensive end Robert Mathis coasted in for a touchdown that essentially ended the game. In that situation, Mariota cannot be indecisive. He has to take what the defense gives to him or tuck the football and run towards the sidelines after gaining some yards. This was not the only time that Mariota has held on to the football this long this season and hopefully he will get the decision-making corrected sooner rather than later. But in this instance, it took all momentum away along with ending the chances the Titans had to win the game.

There were tons of missed opportunities in this game by the Titans offense and defense. But what stands out is these two series in regards to what went wrong for Tennessee. So here the Titans sit, at 3-4, waiting on a Thursday night matchup this week versus the Jacksonville Jaguars. The Houston Texans are atop the division still, but nothing is a given that they can win the division easily. So for the Titans, they may have missed a chance to close in on Houston, but they have Thursday night to potentially gain some ground on the division leader. Their two-game winning streak may be over, but there is still time to start another streak. 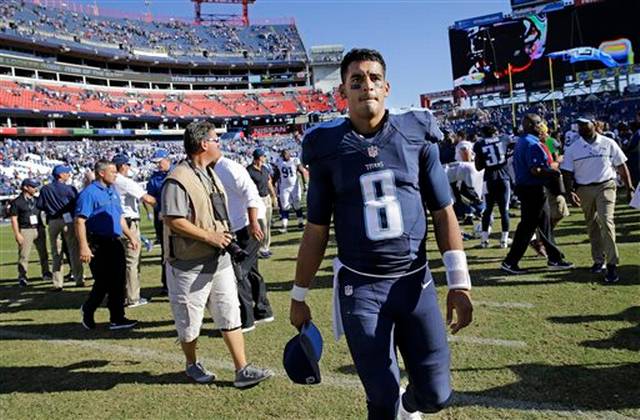