Can You Digg It?

The Minnesota Vikings headed into this year with a lot of hope that they would make a deep run in the playoffs. They had the defense and they also had the running game. The question has always been what can happen in the passing game. And with Teddy Bridgewater going down, there were more questions than answers within that team. Of course, they traded with the Eagles for Sam Bradford and the team eventually thought he would start for them, which he did on Sunday night. But even with the acquisition of Bradford, there were still questions with the passing game. Who was going to step up and be the guy they needed and who would Bradford confide in? Well, if you thought that was tight end Kyle Rudolph, then you were wrong. The one guy (at least for one game) that Bradford depended on was wide receiver Stefon Diggs.

The lead wide receiver for the Viking is someone that no one expected to be who he is. In fact, the Vikings were not even expecting Diggs to be their main receiver. If you watched Diggs in college at Maryland, he was a very exciting return man. That excitement is what got him drafted by the Vikings in the fifth round of the 2015 NFL Draft. But what he has shown the Vikings is that he is more than just a return guy. Diggs has become what the Vikings thought previous draft pick Cordarrelle Patterson would be. When the Vikings drafted Patterson, they thought they were getting a guy that would stretch the field and make big plays deep in the passing game. But with Patterson not working out as well as they thought he would, the opportunity opened for Diggs and he has yet to relinquish the chance he received. He came in last season and averaged over 13.8 yards per reception on his way to 720 yards receiving last season.

Many wondered how that would be affected with the change at quarterback this season. Along with that, there were many that wondered was what he did a fluke or not in his rookie season. Well, if the first two games are any indication, Diggs was just getting warmed up last season. So far through two games, Diggs is leading the NFL with 285 receiving yards and he also has advanced his yards per catch from 13.8 last season to 17.8 this season. There is no doubt that he is the guy that leads this team at the receiver position. And no matter what quarterback is in there, he has gotten open and made things happen. With Shaun Hill, he was able to befuddle the Titans secondary to the tune of seven receptions for 103 yards. And in the second game, he became the primary target for Sam Bradford, accumulating nine receptions for 182 yards and a touchdown in a big win. The Vikings are now 2-0 and they have done so without Adrian Peterson really getting going so far. The defense is a huge factor there with Minnesota, but so is the passing game. And with those two things going and (hopefully) Adrian Peterson getting healthy and coming back to help them, the Vikings and the preseason optimism has stayed there even while missing Bridgewater.

Diggs is one guy that was not thought of to be who he is. But he is definitely a guy that the Vikings cannot do without. He has come out and made some things happen and now is the guy the Vikings look to in their passing game. And with Carolina up next for the Vikings, he will get yet another chance to show how special he can be. But as you look at his numbers so far in his career, remember a guy that used to play there a while back. Diggs' numbers are very similar to this future Hall of Famer. That guy's numbers that Diggs is mirroring right now: Randy Moss.  He may not be that freak of nature that Moss was, but Diggs surely is making an impact the Vikings need. 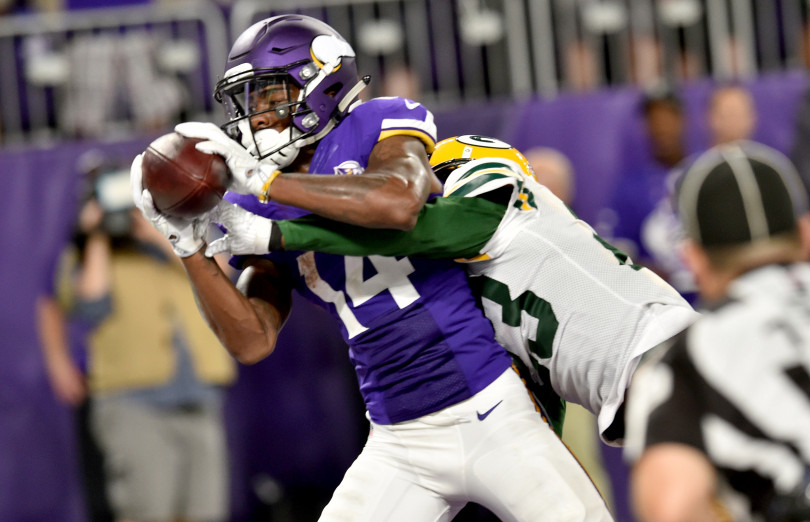 (photo courtesy of John Autey of the Pioneer Press)