What’s Going On With Seattle’s Offense?

The Seattle Seahawks have been a team that has been a contender year after year. Their personality has always been of a team of tough guys that love it when people count them out or don't think they can do something. Amazingly, over their run they have kept that type of edge and mentality even though they have been one of the more successful teams in the NFL over the last five years. Their formula when they first started their run was working the running game offensively and physical dominating at each level defensively. The formula on defense has stayed the same somewhat over time but the offensive formula has definitely changed. As quarterback Russell Wilson got better and better, the offense began to morph more from just a running game and Wilson being a manager to Wilson being a playmaker with his feet and arm and using the running game in there as well. To start this season, many wondered what changes there would be to the offensive formula this time around. With the addition of running back Eddie Lacy, it seemed like the Seahawks were loading back up to be that running team once again. Well, after two games, it seems as if they are still trying to figure things out.

Seattle was able to win their game at home Sunday versus the San Francisco 49ers 12-9, but the win was not even that impressive. The 49ers are supposed to be one of the worst teams in the NFL and the Seahawks were down to them 9-6 in the third quarter, which shocked a lot of people. The Seahawks looked listless offensively and even though they found a way to score, there is not much they can take from this game except they scored their first touchdown of the season. Other than that, it was their second straight ugly offensive performance in a row and there seem to be no answers coming from them at all right now. So with the issues they are having, you have to wonder what is going on for them to look so bad. The first thing is the running game looks bad. The Seahawks used to have that to depend on each and every week. Even when Marshawn Lynch was gone, the Seahawks were still able to find enough in the running game to get some things done. Today, the Seahawks finally had a running back step up in Chris Carson, but finding any rhythm in the running game has been difficult for them so far. The issue is with both the running backs and the offensive line. The line is not supplying that surge that is needed for a running back nor are they consistently providing the holes they used to. That would make it tough for any running back to produce. While the offensive line is having issues making holes, they do make holes sometimes and the running backs are not staying true to what they need to do. To be honest, it looks like some of the running backs may be going in there with their eyes closed. With the limited amount of time they will have to find a hole, the Seahawks running backs are going to have to find one hole and hit it. There just isn't enough time for patience with the line they have.

While running the football is an issue, passing it is too. The Seahawks can be explosive in the passing game with the likes of tight end Jimmy Graham and wide receiver Doug Baldwin. This duo have given secondaries nightmares over the things they can do. These two can still give teams problems but the thing is Russell Wilson has to have time to find them. Wilson was not that great in the first game and was better in the second one, but he is going to take a beating out there if things continue to go the way they are going now. Wilson seems to be running for his life each and every time the Seahawks snap the football. Seattle may be able to beat up on lesser teams with what they are currently doing, but there is no way they can beat the upper echelon teams with their style of play. Since things may not get to be the way they want in the passing game, the Seahawks may want to adjust their style and run shorter routes with the ball getting out quicker. And when the Seahawks do that, then they may want to remind Russell Wilson he has to get rid of the football quick or he will be running for his life. Another thing that could help the passing game is if the Seahawks use the running backs to chip on pass rushers since the Seahawks tackles do need help in that area. It may take a weapon out of the passing game, but it will help keep Wilson healthy and upright.

The Seahawks got away with one and beat the listless 49ers barely, but not every team is still trying to figure themselves out like the 49ers are. So hopefully for them they study film and make some adjustments because at this rate, Russell is going to be severely beat up by halfway through the season. Seattle has figured it out before and they more than likely will figure it out again. The questions this time are how soon can they get this mess figured out and will it be too late once they get it. 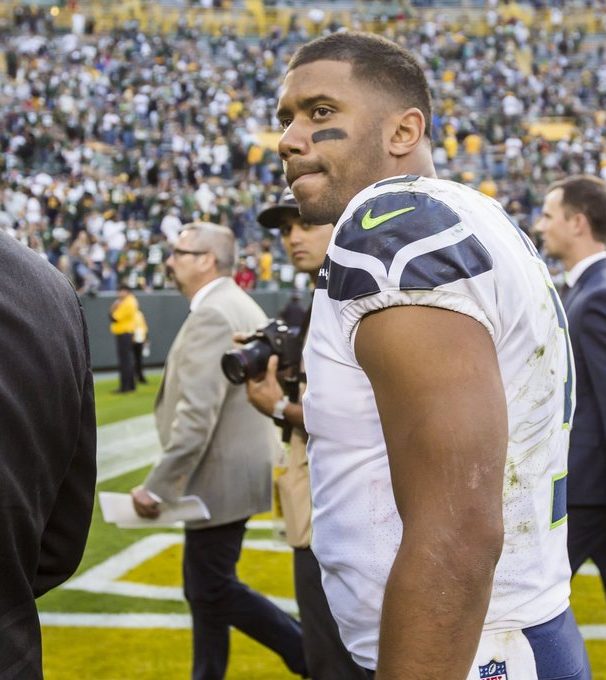