One call did not cost the Saints the game

The NFC Championship has tons of twists and turns. The Saints and Rams went at it in the Superdome in front of a raucous crowd. The Saints were up for most of the game, but the Rams came back and were able to take the game to overtime. And once in overtime, the Saints would get a 57 yard field goal from Greg Zuerlein to win the game 26023 in overtime. The Saints were obviously not happy with the decision and one reason was a call on their last drive of the fourth quarter. On third down, wide receiver Tommylee Lewis was lit up by defensive back Nickell Robey-Coleman. On the play, Robey-Coleman never looked at the ball and clearly committed pass interference. Unfortunately, there was no call and we saw how the game ended. Saints coach Sean Payton said he received word that it was a pass interference call from the NFL and almost all Saints fans are irate over it. And while the wrong call was made, Saints fans and other outraged fans have to realize that one call was not the reason the Saints lost the game. 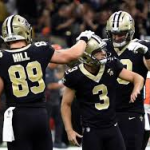 If anyone remembers the rest of the game, it was a rough start to the game for the Rams. The Saints drove down the field on them the first drive and then Jared Goff turned the ball over deep in Rams territory early in the game. With that type of start and how potent the Saints offense is, you would think the Saints would have jumped all over the Rams early. Well, the Rams defense was up to the task both times early on and they held the Saints to only two field goals at that time. If the Saints had even scored one touchdown on one of those possessions to go along with their field goal, they would have created some space between them and the Rams, further helping them cement their control of the game. Instead, they left the door open for the Rams to come back and that's what they did.

Along with the Saints missing opportunities, let's take a look at the last drive the Saints had in the fourth quarter. Everyone remembers the third-down play, but let's revisit the entire drive. With the game tied 20-20 with a little under two minutes left in the game, the Saints were in the driver's seat. They could have gotten another first down, ran the clock down and then kicked a field goal to close out the game. Instead, what ensued was some of the most perplexing playcalling Sean Payton has ever made. First, he threw the ball on first down to Michael Thomas and that was incomplete, stopping the clock for the Rams and allowing them to save a timeout. Next, he ran the football with Kamara to the short side of the field. And finally came the play to not Thomas or Kamara but Tommylee Lewis up the sideline. Looking at that playcalling, it could have been better and Payton could have put more pressure on the Saints with his playmakers. Besides, Kamara was torching Rams linebacker Cory Littleton with option routes out of the backfield. Why go away from that at a crucial time if you're going to pass the football at that time?

Even with what did not go their way in the game before overtime, the Saints did get the 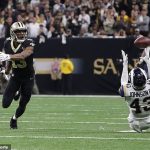 football first in the overtime with a chance to drive down the field and score a touchdown to win. Well, on second and 16, Rams outside linebacker Dante Fowler Jr. got pressure on Drew Brees, hitting his arm on his throw to Michael Thomas. John Johnson III was able to come up with the interception and the Rams offense would go on to get Zuerlein in position to kick a field goal. The interception hurt, but what had to hurt more was the reaction of Thomas when the ball was fluttering in the air. If you notice on the play, the ball was in the air and instead of Thomas going after the ball, he began to complain about pass interference there in the middle of the play. Johnson III, for his part, kept his eyes on the football and made the catch and interception. If Thomas would have stayed in the play, he could have knocked down the pass at the least. Instead, he decided it was time to complain. And if he had just stayed focused, he potentially could have extended the game for the Saints.

The play heard throughout the playoffs was a missed pass interference call and that is a fact, but what cannot go unnoticed is the other things that could have helped the Saints win the game. The referees are not perfect and there will never be a perfectly-called game by them, but good teams find ways to overcome the mistakes of officials. On Sunday, the Saints just were not good enough to overcome the mistakes of officials as well as the mistakes they brought upon themselves.