The Miami Dolphins replaced head coach Joe Philbin with former Chicago Bears offensive coordinator Adam Gase this offseason. That move was supposed to be something that helped the team offensively get it together. There were some that actually thought that his perceived offensive genius would translate to helping the Dolphins offense. But unfortunately for the Dolphins, the perceived genius of Gase has not translated to wins. The Dolphins are currently 1-4 heading into Sunday and they actually would have been 0-5 if it weren't for the Browns snatching defeat from the jaws of victory one game this year. Things seemed to have hit rock bottom on last Sunday when the Dolphins fans began booing the team while they were on offense. The leader of this offense, Ryan Tannehill, seemed to bear the brunt of the frustration of fans. He is supposed to be the leader of this team on that side of the ball. But instead he has just become a lightning rod.

Tannehill signed a huge deal to remain the quarterback of the Dolphins when his rookie deal was coming to an end. And at that point, many felt that he would at least take some steps forward to be a leader for the Dolphins. But instead, Tannehill has still been the inconsistent quarterback that he was from the beginning. His quarterback rating has dropped the last two seasons since signing the big deal he signed. And this year, the Dolphins starter is tied for third in the NFL with seven interceptions. Tannehill does not have the greatest protection around him and all the interceptions are not his fault, but still the numbers are troubling to see. At this point, the Dolphins expected to see a guy that valued the football more than Tannehill does. And with his athleticism, you would think that he would use his legs a little bit more to escape the pass rush. But looking at his numbers, it seems like he refuses to use his legs to move the chains. Judging from the reactions, it seems like the Dolphins fans that were there on Sunday wanted Matt Moore to step in and play quarterback. With this poor play from Tannehill, the Dolphins now have a decision to make come March. And at this point, Tannehill is making the decision very easy for them.

Although Gase said that Tannehill will be the starting quarterback and that he was not coming out this season, he did not guarantee anything for the next season. And in March of 2017, the Dolphins can disassociate themselves from Tannehill and not take a hit at all. Per Pro Football Talk, Tannehill has $14.475 million guaranteed coming his way. But the Dolphins can cut him or trade him before March and not have to pay that money and his $17.975 salary. At this point, that situation looks more than likely. He is not loved by the fans there and he also seems to have never made any improvements during his time. And as the season goes on, the Dolphins could get worse and worse, getting them closer to the top pick in the NFL Draft. Looking at this year's potential quarterbacks, there are some intriguing guys out there. Quarterbacks like University of Miami's Brad Kaaya and Clemson's Deshaun Watson are two guys that could end up wearing a Dolphins uniform if Miami continues to falter. And although it may be a reboot to start a new quarterback, it could end up being a better plan than paying Tannehill for yet another year of disappointment.

The ball is essentially in Ryan Tannehill's court. He has eleven games to leave a good enough impression on Dolphins head coach Adam Gase and the Miami organization. And although there are some challenges outside of his control, he still has the power to make things better than what they are by winning some games. Whether he takes control of the situation or not is totally up to him. But with every game, it seems like we are getting closer and closer to the Ryan Tannehill era being over in Miami. March 2017 could not come faster for many fans wanting him to go. 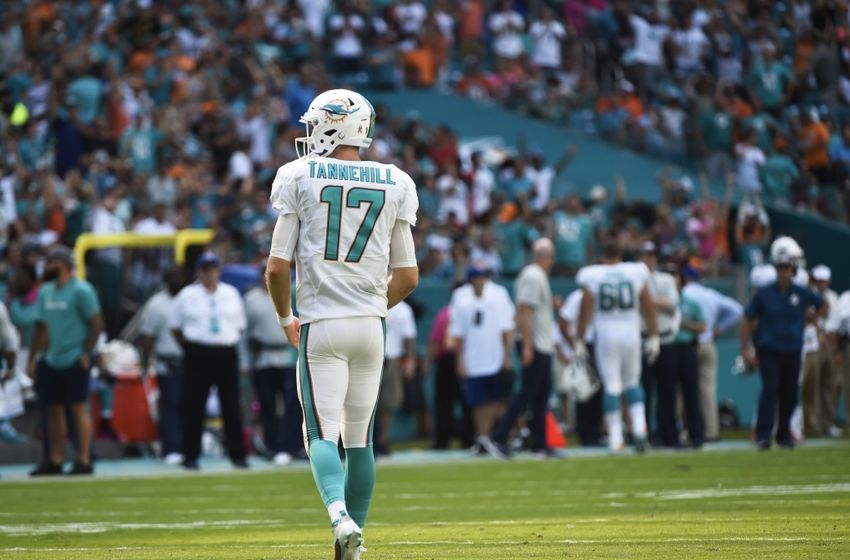