The hype of NFL free agency is pretty much died down. The big name free agents this offseason like Broncos defensive tackle Malik Jackson, Dolphins defensive end Olivier Vernon and Seattle Seahawks linebacker Bruce Irvin have already decided they were leaving for much greener pastures in Jacksonville, New York (Giants) and Oakland. After these three, most of the other free agents began to fall in place. And even though most of the free agent market has dried up, there are still some players out there. One in particular could potentially help a team right now. His name is Reggie Nelson. After having one of his best seasons in his career, the veteran safety was allowed to walk into free agency. And so far, the phone has been eerily quiet in regards to his services. And despite visits to the Jets and interest from other teams, he still remains unsigned. Amazingly, Nelson has not created much buzz at all. And there he sits, waiting for the phone to ring and an offer to be laid out. But why has he not been signed?

One big reason he even reached free agency is the priorities of Cincinnati. Even though Nelson tied for the lead league in interceptions with the Kansas City’s Marcus Peters, he was not the priority for the Bengals this offseason. The Bengals had designs on signing back Adam “Pacman” Jones and safety George Iloka, which they did. Cincinnati still has salary cap space available to sign Nelson, but the thought of him not making it in the NFL for another two or three years has them unsure of paying him. If they are to pay him, they know they will have to pay him more than the $4.8 million. And if he and his agent are paying attention to Eric Weddle’s contract, he may be looking for at least $6 million a year. Cincinnati has to be leery of signing him to that deal. That amount of money is more than likely something Cincinnati is not wanting to pay for Nelson’s services. And quite honestly, not very many teams will pay a veteran safety that has maybe two solid years left in his professional career.

So after Reggie has swallowed his pride and realized that he cannot get the big money deal he wants, where does he land? One thing that is known is his affinity for being in Cincinnati. If he had his choice, Nelson would probably sign back there. More than likely, Nelson would be welcomed back there for the right price. But if they are not able to bring him back and pay him, then there are a couple other teams that are in need of his services. One team that is in dire need of his services is the New York Giants. They have had injury after injury in their secondary. And they also have had issues with players having mental lapses at the wrong time of the games. With Nelson back there, you get a ballhawk with no fear of coming up, being physical and tackling running backs. And in the NFC East, you need a leader at that position. Another team that could use his services is the Washington Redskins. The team got rid of their starting safety, Dashon Goldson, this offseason. And Nelson could fill the role that Goldson filled for Washington and then some with his versatility and superior cover skills compared to Goldson. Arizona is another team that should be calling Nelson as well. That team is really close to making their breakthrough to the Super Bowl. All they need to do is keep their quarterback, Carson Palmer, healthy along with taking care of minor things on their team. Reggie would take care of safety hole they needed to tie up after the departure of safety Rashad Johnson. And that would make the Cardinals even more dangerous.

With each day that passes, Nelson has to be sitting and wondering when that right offer is going to come in. When that right offer comes around, Nelson will be ready and waiting to contribute. But there is no telling when that phone will ring. Until then, all he can do at this point is play the waiting game and workout to be ready. But when he is signed, you can bet that he will be ready to make it happen, especially if that team is not Cincinnati that signs him. He will be ready to prove that age really is just a number. 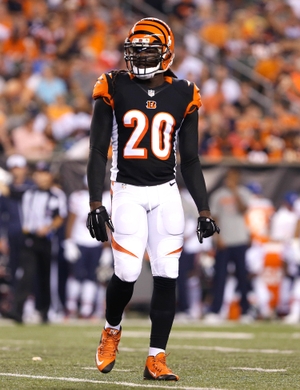