The Rams Go For Broke While The Titans Start Rebuilding

Plenty had questions about what the Tennessee Titans would do with the 1st overall pick. Three options had been put on the table so far. One was to select Ole Miss offensive tackle Laremy Tunsil. Having him would have been great, being that the Titans are in need of offensive line help and he is the best offensive lineman available in the draft. Another option was to potentially select defensive back Jalen Ramsey. The star defensive back grew up about 30 minutes away from Titans stadium in Smyrna, Tennessee and would have been an immediate upgrade at either the safety or cornerback position. But one other option that existed was to potentially trade the pick. Leading up to Thursday, there had been some thought that there were teams interested in the number one pick but not one team had been talked about. The Titans and general manager Jon Robinson had said numerous times that it would take a lot to get the top pick from the Titans. Well on Thursday, he got the ransom that he wanted. The Titans agreed to trade the 1st overall pick along with their fourth round and sixth round picks of this year (picks number 113 and 177 respectively) to the Los Angeles Rams for the 15th overall pick this year, two 2015 second round picks (picks number 43 and 45), one 2015 third round pick (pick number 76) and the Rams’ first and third round selections next year. And with that, the Titans began to reshape their team.

The Titans have a lot of needs on their team. One of them is still their offensive line and even though they traded down to 15 in this draft, there is still a very good one that will be available. They were sold on Laremy Tunsil and what he would bring, but one of the other tackles in this draft is former Michigan State All-American offensive tackle Jack Conlin. The 6’6”, 308 pound offensive tackle is a physical run blocker and can help Titans head coach Mike Mularkey establish the physical run offense that he wants to bring this year. He may not be the most athletic guy, but he surely can get the job done and fill a need for Tennessee. And as far as the other picks, the Titans have a great chance to get a good pass rusher with the 33rd pick in the draft and another good contributor with the 43rd and 45th picks. And finally with the 76th pick, the Titans have a chance to get another good contributor to their team. With all the holes in they have, the more picks they have the better. And with six selections in the first 76 picks of this draft, they have more than enough chances to get some things done the right way. Add to it that next year they will probably have two good draft picks because both the Titans and the Rams will probably not make the playoffs, and the future seems bright for the Titans under Robinson.

As far as the Rams side of this trade, this is definitely something that has rocked the draft order. Tunsil will definitely fall an now there is no telling where Jalen Ramsey will fall to. The Rams were on the other end of the RGIII trade when they received a King’s Ransom and now they have given up a ton for the 1st overall pick. But Rams’ brass felt that it was worth a gamble to give up so much for the top pick. As far as what they plan to do with the pick, plenty expect them to pick a quarterback. But the thing that no one knows is which top-rated quarterback they will pick. On one end of the spectrum, North Dakota State quarterback Carson Wentz is an intriguing figure. Standing at 6’5” and 237 pounds, he looks like a prototypical NFL quarterback. But the question about him is how he will do against stiffer competition than he has faced all his college career. He could do well, but he could also be a flop. The other option for the Rams with the number one pick is California’s Jared Goff. The buzz was at an all-time high before his junior year. And although he had a good season, the buzz has definitely died down. Goff does what he is supposed to and has a quality arm that can make all the basic NFL throws. But Goff does not have the super-sized arm that many look for and that can cause him to not have accuracy when he reaches back for that little bit of extra zip. And that could potentially cost the Rams should he try to fit one into a tight space on the field. The Rams have hedged their bet and pushed all their chips to the middle of the table. And one of these quarterbacks will prove whether they were right or wrong.

Whether the Rams get the right quarterback or not will be found out later down the line. But for right now, the Titans have to be grinning and smiling at their side of this trade. So far general manager Jon Robinson has got the Titans a new running back in DeMarco Murray in a trade from the Eagles and now has the Titans in position to fill a ton of holes that they have. The Titans are by far the winners in this trade and Robinson has definitely started off on the right foot. And thus starts the rebuild of the Titans organization. 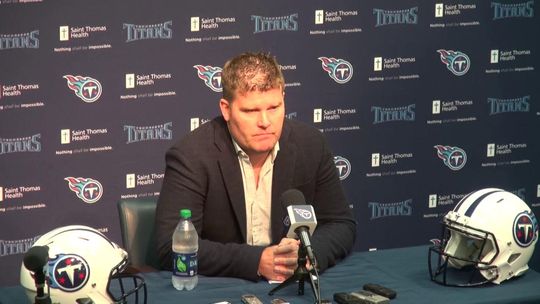 (photo courtesy of The Tennessean)