The Raiders: Kings Of The Road

There were a lot of high hopes for the Raiders coming into this season. Their offense was one that was set up to succeed. They had a young, talented quarterback in Derek Carr, two talented receivers in veteran Michael Crabtree and youngster Amari Cooper and a collection of talented running backs led by Latavius Murray. But the worry about this team has always been the defense. But other than the defense, the other worry some had about this team is how they would do on the road. Of the first eight games the Raiders have, they have played five of them on the road. Now for a team that has youth at key positions, it would be great to have a positive record on the road to start the season. But no one really expected what they were going to get this season so far. The Raiders now sit at 6-2 to start the season. And what is so amazing is they have done so with five of their wins being on the road. Down the stretch of the rest of the season, the Raiders now more home games left in a season that has been great for all Raiders fans. But what has been some of the keys for the Raiders winning five games on the road this year?

It never hurts when you have an MVP candidate as your quarterback. Derek Carr has lived up to the talent that everyone thought he could be. He has a total of seventeen touchdowns so far this season and only three interceptions. But if you think those numbers are impressive, then think on how he has done on the road. Carr has an impressive eleven touchdowns on the road so far. And for the year so far, he only has one interception on the road. Protecting the football is what a quarterback is supposed to do. And not only is Carr protecting the football, but he is making the winning plays and winning decision. A perfect example was the decision he made on fourth and four against the Tampa Bay Buccaneers on Sunday afternoon. Jack Del Rio, trusting his offense , put the ball in his best offensive player's hands. And with that added level of trust, Carr made the correct decision. He hit wide receiver Seth Roberts in stride while he was running a crossing pattern. Roberts was able to break two tackles from a couple Tampa Bay defenders and took the pass to the house. These plays by Carr are becoming common occurrences as he ascends up the ladder of the NFL quarterback ranks.

But not only is the play of Carr been spectacular for the Raiders on the road, so has the calm this team has shown. Time and time again, it looked like the Raiders were going to lose games on the road, but they showed enough poise to get things done. For example, the Raiders were trailing in their season-opener this season in New Orleans. The Saints had just scored to take the lead with 6:03 left in the fourth quarter and the Superdome was rocking. Any team that was fragile mentally would have folded under that type of pressure. But following the lead of their head coach and his nerves of steel, the Raiders began a huge drive. Oakland drove seventy-five yards in eleven plays and capped off the drive with a ten yard touchdown pass from Carr to Seth Roberts with forty-seven seconds left. And instead of them going for the tie, Del Rio went for two and Carr was able to hit Michael Crabtree while he was being interfered with by a defender. The Raiders would hang on to win the game and that play would be something that would help set the ton for their season up to this point.

At the beginning of the season, there was expected to be improvement. But no one expected the improvement that we have seen out of the Raiders this quick. They are playing so well that they have worked their way into the contender category. While they are 6-2, they still have some work to do. But they can punctuate their return to contender status if they are able to take care of the Denver Broncos in their next game. It may have taken a little while, but the Raiders are finally back. And they are quickly becoming a team that many love to watch. 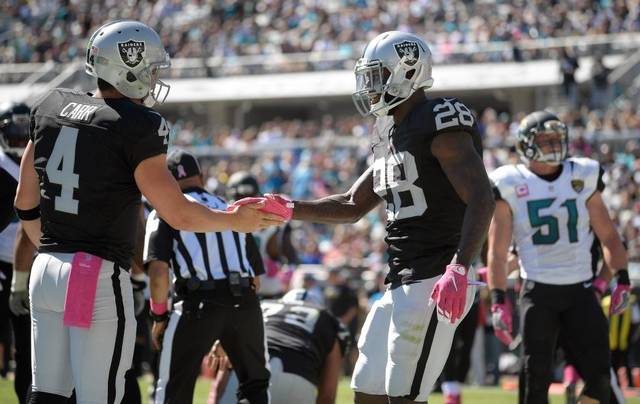