The New England Patriots versus the Los Angeles Rams was billed as a potentially high-scoring game. The Rams have been putting pressure on defenses all year long, while the Patriots were certainly capable of putting up numbers in their own right offensively. Well, the Super Bowl was anything but pretty offensively as the Patriots were able to hold the Rams to three points the entire game, winning 13-3 on the way to their sixth win as a franchise. The game wasn't the prettiest from an offensive standpoint and many fans let the NFL hear about it. They were calling the game ugly and saying they wished they never watched it. Along with that, people were rejoicing in Tom Brady winning his sixth ring after that game. While Tom Brady is one of the greatest quarterbacks of all-time, this game wasn't one that he won because of his play. 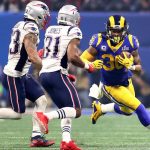 Looking at the game itself, the Patriots had two things that had to go right: slow down the Rams offense and run the football. Coming out in the game, the higher priority was stopping the Rams offense. The running of Todd Gurley, the passing of Jared Goff and the collection of playmakers he had were impressive and would be tough challenge for the Rams. However, the Patriots were up for the challenge. They stuffed the run majority of the game, holding the Rams to only 62 yards rushing in the game. Along with that, neither Gurley or CJ Anderson averaged over four yards per carry. To a Rams team that depends on the running game to get everything going, that was huge for their defense to make them one-dimensional. And as a result, the Rams had to depend on Goff to lead them with the passing game, which he showed he was not ready to do. 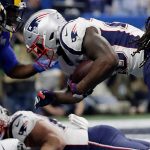 Sony Michel goes in for the touchdown late in the game.

The Patriots defense showed up, but so did the running game for New England. Plenty were caught up in seeing Tom Brady tear into the Rams' defense, but that isn't what we saw. What we saw was a Rams defense that played very well defending Brady for majority of the game. The only wide receiver that seemed to get open for New England besides Julian Edelman was Rob Gronkowski, who caught a big pass to put the Patriots in position to go up for good. The running game, however, was wide open most of the game. Rookie  Sony Michel was spectacular, having 18 carries for 94 yards and a touchdown. His backup, Rex Burkhead, had 43 yards on seven carries. Both averaged over five yards per carry in route to helping Brady out. The Patriots could run whenever they needed to and did so to control the game.

Tom Brady officially does have six rings and that is an accomplishment worth being proud of. What isn't worth being proud of is people touting him like he was great in this game. The reality is he wasn't and the defense and running game won this one. Anyone that thinks otherwise may want to look at that score again and then look at the stat line of Brady.