Who’s Bringing The Heat For Tennessee?

Going into the first full season under Mike Mularkey, the Tennessee Titans are looking to take a step forward. They have drafted, spent money and even made trades with teams to add to what they have. The new regime, led by new general manager Jon Robinson, is focused on creating an identity for the team. On offense, the Titans want to be a physical football team that bashes teams all game long. They acquired a few running backs in DeMarco Murray (via trade from the Philadelphia Eagles) and Derrick Henry (drafted in the second round of the 2016 NFL Draft) to help aide in that transition. On defense, the Titans would like to be a physical team as well. One guy that has always personified that is defensive tackle Jurrell Casey. The Titans best defensive player is equally as physical against the run as he is rushing the passer. But along with the physical transition defensively, the Titans are still missing something up front.

The Tennessee Titans have been searching for an edge pass rusher for some time now. They have tried through the draft and through free agency and have not been able to find someone consistent there over the years. Their latest crack at trying to get a pass rush was brought in last season. Veteran outside linebacker Brian Orapko was signed by the Titans in 2015 to play in their new 3-4 defense. After an injury-riddled 2014 season, the Titans took a chance on bringing him here to Tennessee. And so far, he has given them seven sacks in his lone season here. That is a solid contribution for a good pass rusher. But for what they are paying him, they need much more from him. Orapko needs to be a guy that defenses gameplan for. A guy that defenses have to worry about at all times. If he reverts back to that type of guy that he was in 2013, then the Titans should be delighted with him. Back then, Orapko was all over the place. He had ten sacks that season along with a career-high in tackles. But the scary thing about one of the most productive years he had in the NFL was that it was three seasons ago. And at age 30, it will be interesting to see if he can crank it up to that level once again.

Other than Orapko, there is only one other guy that can create pressure off the edge and that is Derrick Morgan. The veteran outside linebacker had a chance to leave Tennessee and play somewhere else after the 2015 season. But instead of doing so, the Titans brass decided to pay him to stick around. The thought was that he and Orapko could be a tag team together on the outside. Well, Morgan did not hold up much of his end of the bargain unfortunately. He was only able to play in ten games and during that time, he collected 4.5 sacks. For someone that the Titans need to make an impact, that was an underwhelming performance. Going into this season, the Titans will once again hope to get more out of Morgan. But they may be hoping against hope waiting on that production to come. Morgan has never gotten double-figures in sacks. In fact, he has never gotten over 6.5 sacks in one season. If the Titans expect the pass rush to be better, then they have to get more from Morgan in tandem with Orapko.

The Titans pass rush will be key for them this season, particularly the edge rushers. If both Morgan and Orapko can make it happen coming off the edge, then that will greatly benefit the Titans defense. The secondary will not have to cover for as long and the linebackers will have less ground to cover as well. And with that, more attention will be coming their way. But if they disappear this year, then the Titans defense will have some serious issues. For the sake of the Titans, they better hope that veteran defensive coordinator Dick LeBeau is able to create some ways to get those two loose and help the Titans win some games. 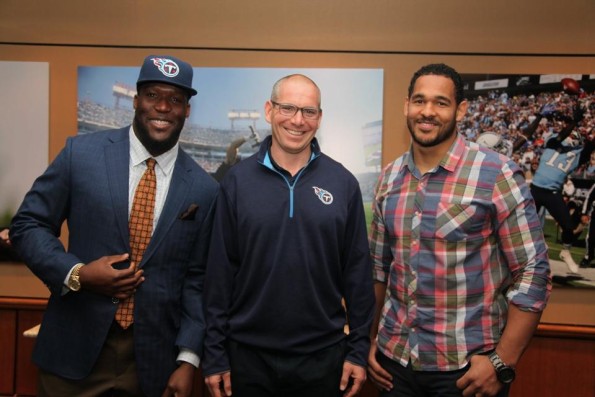