The Josh Norman/Odell Beckham Jr Battle Is Upon Us

The New York Giants have had a good start to the season, going 2-0 to the start of the season. On the opposite end, the Washington Redskins have not had the start to the season they wanted, going 0-2 out of the blocks. Well, these two teams meet up Sunday trying to win a football game. For the Giants, this would make two wins in the division. As for the Redskins, this would give them their first win of the season. But aside from the matchup of these teams, there are two players that everyone has been waiting to see face off against each other. Josh Norman and Odell Beckham Jr. have a colorful past with each other. Who can forget them going at each other last season and all the personal fouls, scuffles and questionable things that happened. And along with that, the war of words in the media before and after the game. Well, now that Norman signed with the Redskins, we will get that battle two times a season provided both are healthy. And with that, you know there would be more talking and from a fan's prospective, more excitement to see this battle on the field. Well, with the announcement that Norman will be reportedly following Beckham Jr. all over the field, that just made this battle that much more interesting. But the real question is who wins this battle and why?

Norman, to many, is a corner that is a product of the system he was in. With the Panthers, the veteran cornerback had a front seven that got pressure on the quarterback and also had the best linebacker in the NFL in Luke Kuechly. As a result of that, many don't give him credit for being one of the elite cornerbacks in football. And of course, many believe that he will be exposed with the Redskins as their star corner. Of course, the first two games have not helped his cause with him not shadowing the best receiver of the opponent all over the field. For a guy that was being paid like the top cornerback in football, that was unacceptable for a lot of people. So this week, he will cover Beckham Jr. everywhere. For him to do well, he must come out and play sound technique-wise. In his first two games, he has had solid moments where he plays good technique. And at other moments, he has played technique poorly. To get the best of Beckham Jr., he will have to limit the mistakes in coverage. If he does not limit those mistakes, then Beckham Jr. will take advantage of him. His best shot at trying to get Beckham off his game is to get in his head once again. If he is able to do that, then we could get some of the same out of control Beckham we got last season and that would not be good for the Giants.

Beckham Jr. has been one of the most exciting players in the NFL. He can make the routine look easy and the incredible look even easier. And over his time, he has become the focal point of the New York Giants passing attack and the favorite target of quarterback Eli Manning. Through two games, the talented wide receiver has twelve receptions and 159 yards, but he has yet to get in the endzone. Even though he has put up solid numbers, there are some that are waiting for more from him and have been spoiled by his performances of the past. Heading into this matchup, there are many wondering how he will do. Well, for him to have a good game, he has to at least keep his head in it. Last season, he lost his mind on the field and that led to him missing a wide-open touchdown pass as it glanced right off his fingertips. If he is able to do so, then he will give Norman some issues. Along with keeping his head in the game, Beckham Jr. has to run crisp routes. The better the routes he runs, the more he keeps Norman off balance. And when he is open against Norman, you know Manning is going to find him. For all that he did not do against Norman last season, he did beat him a few times, including one for a touchdown.

Norman and Beckham Jr.'s war of words this offseason is finally going to go to the field this week. And that is where this should be settled anyway. Norman will make some plays. He is a good cornerback and that will happen. But on the flipside, Beckham Jr. is a good wide receiver that will make some plays as well. The question is who will make more plays to help their team win the game. Beckham Jr. versus Norman Part Two is here this week folks. Let the fun begin. 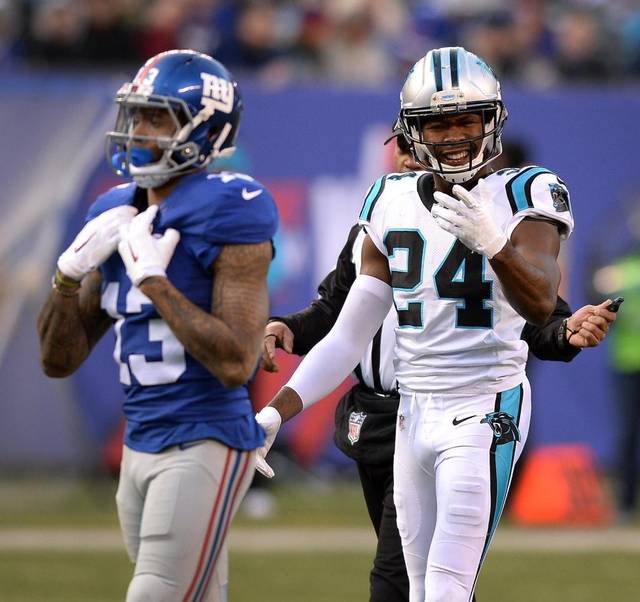