The Three Biggest Contenders In The NFC

The regular season was highly entertaining. There were some teams that showed up a little bit more than any of us thought. Along with that, there were some teams that were highly disappointing. With all that coming to an end, the NFC gives us now six teams vying for the Lombardi Trophy in Minneapolis this January. Those teams are the New Orleans Saints, Philadelphia Eagles, Minnesota Vikings, Atlanta Falcons, Los Angeles Rams and the Carolina Panthers. All six of these teams have reasons for everyone to love them and reasons for people to think these teams have no chance. Within all that, there is a favorite to win it all and they fall in a certain type of order. With that being said, there are three teams that have realistic dreams of winning the NFC crown.

One team that has to be mentioned as a title contender has to be the Minnesota Vikings. This team is one that no one really talked about until the later parts of the season because many were not sure what they were. Well, the season has come to an end and the second season is about to begin and the Vikings are playing excellent football. Their offense has featured the running game and the most unheralded part of their offense is their offensive line. They have rotated and replaced players all season due to injury and they still keep rolling in the passing and running game. If those five up front can continue what they have been doing, then their offense has a chance to put points on the board, especially with the underrated wide receiver tandem of  Stefon Diggs and Adam Thielen and Latavius Murray running the football well down the stretch. The defense has also been solid with Xavier Rhodes, Eversen Griffen and Anthony Barr leading the way. While the defense and the offense look good right now, the question that will be hovering over this entire run in the playoffs will be asked multiple times. Can Case Keenum lead the way for them at quarterback? That question is one that we will get the answer to one way or the other this postseason. For the sake of the Vikings, they better hope he does not freeze up when the bright lights of the second season turn on.

The Vikings are a team that could be there representing the NFC, but another team that could appear in the Super Bowl is the Los Angeles Rams. Yes, those Rams who were horrible under Jeff Fisher. The young Rams led by potential NFL Coach of the Year Sean McVay have finally got things turned in the right direction. His biggest turnaround has been in the play of quarterback Jared Goff. In the second year of his career, Goff has played way above what some thought he would play. And in addition to Goff, the play of the pieces around him has been good. Todd Gurley II has ran and caught his way into the MVP conversation while wide receivers Robert Woods and Sammy Watkins have been flourishing in their escape from Buffalo. The weapons have obviously helped Goff become a better player along with the tutoring of McVay. As far as the defense, they have one of the best defensive minds ever in Wade Phillips coaching them and they have always been fast, stingy and dangerous even without him. The Rams have all the tools to make a run and win represent the NFC in the Super Bowl. Unfortunately, there is one thing that could hold them back and that is experience. The Rams have not been anywhere near the playoffs under the leadership of former coach Jeff Fisher and plenty of their roster is not playoff tested. So while they do have a lot of components to win the NFC, they don't have the experience that many look for to lean on.

Speaking of experience, the Saints have one man that has been to the mountaintop before and his name is Drew Brees. The veteran Saints quarterback, while heading into free agency this summer, had a very solid season. While Brees was being solid, he was not the reason this team took a quantum leap this year. The running backs of this team, Pro Bowlers Mark Ingram and Alvin Kamara, were dynamic and gave teams fits. The running game was essentially the focus while Brees did his thing through the air when needed. The defense, which was torched early in the season, has been spectacular under the leadership of former Raiders head coach Dennis Allen. They have been flying to the football and making play after play after play. The Saints are definitely primed and ready to win it all, but like all the teams listed, they have some holes as well. The Saints have done well defending the passing game, but they are still in the bottom half of the NFL. If they are to face a team like the Vikings or the Rams that can do some things in the passing game, then there is potential for some problems.

The Rams, Saints and Vikings are all the cream of the crop when it comes to the NFC. The Eagles would have been, but when Carson Wentz went down, their Super Bowl dreams took a fatal blow. The Falcons and Panthers have a chance to make it as well, but those teams are not quite ready for prime time in my opinion. We shall see what happens and who is able to cover up more of their issues, but one of these three teams will more than likely be representing the NFC. 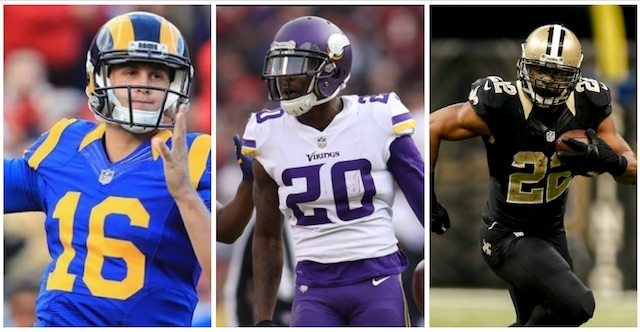