The New York Jets were a surprise team coming into last year. They spent the money, but the biggest question was their quarterback play. At the beginning of the season, the starter was expected to be Geno Smith. But unfortunately for him, he got knocked out by one of his teammates. The result was Geno sitting out with a broken jaw and the teammate who punched him getting cut. Even though it was a bad thing for Smith, it ended up being a blessing for Ryan Fitzpatrick and the Jets. The Jets traded for him from Houston, thinking he probably would be the backup quarterback. But instead, he became the starting quarterback and had a good year. Of course the Jets missed the playoffs, but they were moving in the right direction, especially under Fitzpatrick’s lead. But the unfortunate thing is the Ryan and the team have not been able to come to an agreement on a new contract. The veteran has been just sitting out there, waiting to see if he can get somewhere and play some football. Fitzpatrick is a part of the equation the Jets have not been able to solve in the last two months: who will play quarterback? And like the many ways there are to solve a problem, the Jets have many options they can choose from.

Of course, the first option the Jets have is to come to an agreement on a deal with Fitzpatrick. The veteran had one of his best years since he was in Buffalo, when he was playing under current Jets offensive coordinator Chan Gailey. And under his leadership, the team had their moments where they were very productive. But unfortunately, these two cannot come to an agreement at this time. There have been various reports on what Fitzpatrick wants contract-wise, but you would have to think he wants somewhere in the neighborhood of $16-$18 million a year. If you compare his numbers to that of Sam Bradford, he had a way better season in 2015 and Bradford, another free agent quarterback, got a two-year, $35 million contract with $22 million guaranteed. Fitzpatrick thinks he is worth that much money. But the downside and the reason why he has not been signed by the Jets is because they feel he is not worth that sizable a deal in terms of average per year and guaranteed money. After all, he will turn 34 this year and we all remember how he played when he got paid in Buffalo. Time will tell if that situation works out. But for right now, that is an option that is still sitting on the table.

Along with waiting for Fitzpatrick, the Jets have also looked at a few other quarterbacks to take his place. They had quarterback Robert Griffin III come in for a visit before he decided to sign with the Cleveland Browns and recently they brought in former Houston Texas quarterback Brian Hoyer for a look. But along with these two, there have been others that have been mentioned as being received in a trade. Colin Kaepernick has been primarily mentioned in connection with the Denver Broncos via trade this offseason. But from all indications, that trade is dead. The Jets could go after him and give him a fresh start. Another trade option could be Mike Glennon down in Tampa Bay. Before the Buccaneers got the 1st overall pick, Glennon was thought to be the guy at quarterback that the Bucs were going to give a shot. But that door has closed with the reigning Offensive Rookie of The Year taking over. He could come in and try to be that next guy for the Jets. One other trade option could be Sam Bradford of the Jets. Of course the deal he signed this offseason is a little rich for the Jets, so he would more than likely have to restructure his deal. But he apparently was not happy that the Eagles traded up to get the 2nd overall pick in the draft to go get his replacement (the Eagles want to go get North Dakota State quarterback Carson Wentz) and he wants to be traded. Draft day is getting closer and closer and the Jets could trade some picks to land one of these guys.

If the Jets decide they don’t want to go with either option at quarterback, then they could stick with the guys that they currently have. On their current roster, they have one guy that has been there for a few years. His name is Geno Smith. He was slated to be the starter last season until he got jaw-jacked. The former 2013 2nd round pick could step right in and be the guy the Jets start the season with. Of course, if he is to do so, he had better be careful and consistent. Those two words have haunted Geno for most of his career and sometimes within the same game. But if the Jets go with him, they are banking on him learning over his time in the NFL. If the Jets do not feel comfortable with Smith, the other option is a draft pick from last year. Bryce Petty was a superstar quarterback in college. He lit it up at Baylor every single weekend he was playing. But the adjustment to the professional game is one that he is still working on making. The former 2015 4th round pick spent all last season on the bench. But there are some that think he could be the answer at quarterback if given the opportunity. It will be interesting, if they stay in house, who ends up being the quarterback or if they decide to draft a quarterback with the 20th pick. There has been talk of former Memphis quarterback Payton Lynch being their selection if he is there.

The draft is coming and the Jets have to start making some decisions on their quarterback position. Do they trade for one, draft one, keep the in-house guys to compete for it or sign Fitzpatrick? It will be interesting to see what decision Jets General Manager Mike Maccagnan makes. 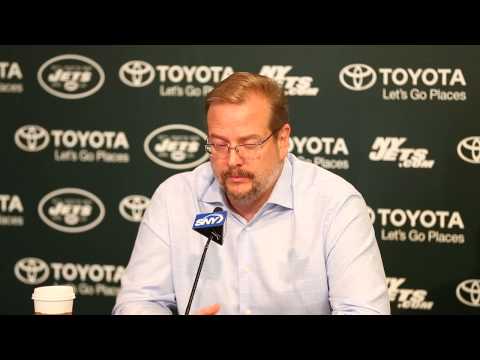