The Mitchell Trubisky Era Has Begun

The Chicago Bears offseason was an interesting one when you think on their quarterback situation. The Bears did not bring back Jay Cutler this offseason and there were cases made for all the top choices out there on the market. In the end, the Bears decided they were going to bypass a starting quarterback like Kurt Cousins and take a chance on Mike Glennon. The Bears and the former backup quarterback of the Tampa Bay Bucs agreed to a three-year, $45 million deal ($18.5 million guaranteed) that was supposedly going to solve their quarterback issues. Imagine the surprise when Glennon saw the Bears draft quarterback Mitchell Trubisky out of North Carolina with the second overall pick. While the Bears played it off that Glennon was still their starter, everyone knew it was only a matter of "when" and not "if" in regards to his shot to be the starting quarterback for Chicago. Well, after four starts in which Glennon has not looked impressive (4 TDs, 5 interceptions and 833 yards passing), the Bears have decided that time is now for Trubisky and he will be starting the next game out for the Bears against the Vikings on Monday Night Football. While the excitement is there, Trubisky still has to play the game. So with that being said, what can we expect from him?

If you studied Trubisky, you would know what kind of offense he came out of in college. At North Carolina, the Tar Heels liked to spread out the offense and run the offense with tempo. Trubisky succeeded in that style, so I would expect the Bears to incorporate some of that into their offense for him. Doing that will help him ease into the game a little bit more. The more comfortable he gets, the easier he will find it to make throws and to make some decisions on the field. Another thing to look for is the Bears to try and make reads easier for him. Trubisky may have done well in the preseason, but the regular season is a whole new ballgame compared to that. He was going against some players that probably did not even make the team. So to combat giving him too much to do out there on the field, the Bears should give him easy reads along with rollouts that can cut down the field he has to read early in the game. As time goes on, he will understand and be able to take on more, but you don't want to overwhelm him to start his career.

As far as the performance of Trubisky, there could be a kaleidoscope of things happen to him out there. The first thing he has to is make sure to do is not stare down his receivers.  Defensive backs not only read quarterback movements but their eyes as well. What he must do is perfect the art of deception with his movements. The more he is able to get those things down and not have tunnel vision on his target, the less tipped balls or interceptions he will have. Another thing that you can expect from Trubisky is some erratic throwing. While he may say he is ready, there will be some throws that have a little too much juice on them. In that same aspect, when he calms down, there could be some throws that he pulls the string on a little bit too much, causing them to be short. Once he gets used to game speed and the people that he is around on game day, then he will be able to control that better, but until that happens, look for the erratic throwing to happen. The good thing for him is that he has a franchise that is committed to him working through his mistakes.

Mike Glennon now gets to become one of the highest paid backup quarterbacks in NFL history with the Chicago Bears. He definitely has to be upset because he is not the starter there anymore. Even though that is the case, it will be interesting to see the interaction between both of them as young Mitchell Trubisky gets the chance to write his own story in the NFL. Whether it will be one of success or one that reminds Bears fans of Cade McNown is something we can only wait to see. 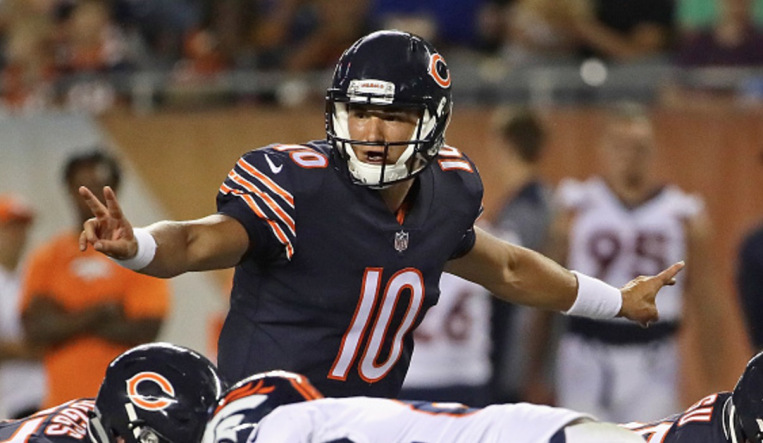