Who Replaces Marshawn Lynch In Seattle?

The Seattle Seahawks have been a very successful team over the last few years. They have won a Super Bowl, appeared in another, and been in the playoffs four straight seasons. But one constant that cannot be avoided is change. And one big change that happened for them this offseason is the absence of running back Marshawn Lynch. The physical running back had one of his most injury-riddled seasons of his career. And with that, he put up only 417 rushing yards, his lowest total of his career. But even with this lower-than-normal numbers, Lynch still was a guy that had to be accounted for. At any point in time, he could break off one of those physical runs that went for 20 yards and left defensive opponents laying on the field. With him gone permanently, the Seahawks have to turn the page at that position. Last season, they began to turn the page offensively by putting more of the offense with quarterback Russell Wilson and the passing game. But they still need someone to run the football for them. The question at this point is who will that guy be for Seattle? Well, that is yet to be determined, but they do have a lot of candidates.

The easy answer for Seattle could be running back Thomas Rawls. The undrafted free agent made the roster last season and even made a big enough impression to become Marshawn Lynch's backup. And when he got his chance when Lynch got hurt, he made it count. Rawls ran for 839 yards this past season in only 149 carries (5.6 yards per carry). The former Central Michigan running back ran tough and hard through the holes and had enough speed to hit some homeruns in the running game as well. Plenty remember his game against the Cincinnati Bengals where he took a handoff 69 yards for a touchdown. At that point in time, plenty believed that Rawls was on his way to becoming the starter when Lynch decided to hang his cleats up. But unfortunately for Rawls, his rookie season came to an abrupt end when he broke his ankle and suffered torn ligaments in the first half against the Baltimore Ravens on December 13. He should be recovered by the time training camp starts, but there has to be some questions as to how he will come back. Sometimes it takes more time for a player to get back used to the flow of the game. And in that time, Rawls has to get to a point where he trusts that ankle with all the trauma it faced with that injury last season. He could come back and be just fine. But there is no guarantee that will happen.

Other than Rawls, the Seahawks have another guy that came up through their system vying for that starting spot. Christine Michael was selected in the second round out of Texas A&m in 2013. Many expected him to actually be one of the potential replacement for Lynch when he was drafted and when Lynch decided to call it quits. But unfortunately his first time around with Seattle did not produce many results. He barely got on the field and was eventually let go. He played with Dallas to start last season, but was not able to crack their rotation at running back either and ended up landing back in Seattle after being let go by the Cowboys. He was solid in his second stint in Seattle, having two solid rushing performances in the last three regular season games. And in the postseason game versus the Minnesota Vikings he was very solid, leading the Seahawks in rushing with 70 yards. Of course the Seahawks were behind a ton against the Panthers early and he never really got involved in the game, but Michael did play solid when given his chances. Michael is solidly built (5'11" and 221 pounds) and has shown that he can run tough. But based on his career, it seems that he has never really gotten the opportunity to be the starting back on a permanent basis. He has the ability, but based on his career track, he is destined to be a backup running back for the Seahawks. And with what all they brought in through the draft, he may be lucky to even be on the roster at the beginning of the season.

The returning players have a leg up on the competition to replace Lynch, but the Seahawks have two rookies that could definitely factor into the equation. Rookies Alex Collins and CJ Procise were monsters in college football. Collins was drafted in the fifth round by the Seahawks out of the University of Arkansas. Undoubtedly, his speed in the forty-yard dash and his perceived lack of receiving skills hurt his draft stock. But when you turn on the tape and watch this guy run, you realize what a player he is. He may not be fast, but he certainly is shifty and powerful. And that is what allowed him to rush for over 1,000 yards three seasons in a row in arguably America's toughest college football conference. And that type of running is something the Seahawks could use although they could use a running back that has some hands as well. Collins should get a shot to be the starter, but his perceived limited receiving skills could be something that hurts him. But he is not the only running back the Seahawks took in the NFL Draft.

The Seahawks actually draft running back CJ Prosise ahead of Collins in the third round. The former Notre Dame running back actually started his career as a wide receiver for the Fightin' Irish until he was moved to running back. And with his 6', 220 pound frame, the transition was not tough on him at all. He ended up rushing for over 1,000 yards and still showed the skills to catch the ball out of the backfield. His skills in the passing game along with his size could make him the perfect candidate to play Russell Wilson's wingman in the backfield. But the only question about him is how long it will take him to adjust to being a running back in the NFL. After all, he only played running back one season at running back in college. For as well as he played, he is still learning that position. His receiving skills are ahead of Collins in the passing game. But Collins has the upper hand when it comes to knowing the running back position.

Four players are vying fill one roster spot. Marshawn Lynch's departure leaves a gaping hole. In a perfect world, Seattle would have a solid replacement already in place and ready to go. But the world isn't perfect and neither is the process to replace someone. The Seahawks have some things other things to work out on their team, but this spot is definitely one that will be a key for them. 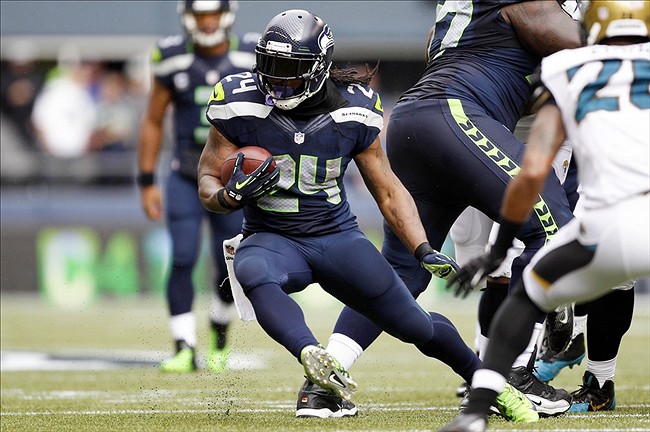