Jim Irsay’s To Blame In Indianapolis

The 2016 season did not go as well as the Colts expected. There was uncertainty with the front office with general manager Ryan Grigson and head coach Chuck Pagano that hung over the entire season. The team did not do well under the pressure and finished 8-8, which left them in third place in the AFC South, their worst finish in the Pagano era. Along with that terrible finish, their franchise quarterback was playing injured the entire season. Luck had a shoulder issue that required shoulder surgery this offseason. Apparently, he had been dealing with that injury for two seasons and it finally got bad enough to let doctors try to go in and repair it. The way things were put out there, Luck was supposed to be back on the field during training camp and ready for the season. Well, it is the end of August and we have yet to see Luck play in a preseason game or even be cleared to play in a preseason game. Backup Scott Tolzein has been starting in his place in the preseason and doing the best that he can. The way it was spinned to everyone is that Luck would be ok, but as of today, it is definitely time to worry about the future of Luck on the field and all of this is laying at the feet of the Indianapolis Colts organization.

There is no timetable for Luck to step on the field and that has to be a concern for the team has they go forward right now. Luck is a talented quarterback and with him, the Colts had some sort of shot to win the division. Without his status in question, the Colts definitely have no shot to win the division at all. Their defense is not good enough, their offensive line is not stout enough to run block well or pass block well and their backup quarterback is someone that fans of the team do not have confidence in winning games (and the organization does not have confidence in Scott Tolzein is they really want to be honest with herself). This mess the Colts have in regards to this organization all falls on the shoulders of one man: owner Jim Irsay. All those years that people were excited about the Colts and how they were doing, people overlooked the hits that Andrew Luck was taking and the porous product that Luck was covering up with his abilities. The Colts had to know eventually that would catch up to them and it did with disastrous results. Pagano got a bunch of the blame, but general manager Ryan Grigson is the one that saddled him with some of the players that he did. He can only coach them up the best that he can. Not giving him any excuses for how he did as a coach, but Grigson definitely did not help him and work with him well at all and Irsay was the one that kept this general manager around along with this toxic working relationship between Grigson and Pagano. Essentially he got what he paid for.

Not only is Irsay responsible for keeping on a lackluster general manager who would not get the pieces to protect his franchise, but he also did not get Luck the medical attention he needed. Luck said that he suffered the injury and played with the injury for a while. The medical staff apparently allowed him to keep on playing with this injury and so did the coach, general manager and ultimately the owner. While some may want to say that Irsay probably did not know what was going on, I say otherwise. Irsay is the owner of the team and probably knows any and everything that goes on with the team. So when someone tells me that he did not know his star quarterback that he just paid big money had a serious shoulder injury, I cannot believe that at all. What Irsay should have done is pulled his franchise quarterback out of action to get his shoulder repaired. Maybe if he would have pulled him earlier in last season, then the Colts would have their starting quarterback back. Instead of that happening, now they are still in the Andrew Luck guessing game and that has no answer to it at this present time.

The Colts organization does not look very good right now from top to bottom. While there should be some firings (other than Ryan Grigson) and some movement, the only one that holds the keys to fixing Indy is Jim Irsay. He has to turn his organization around but he surely did not do himself any favors in regards to his handling of Luck both in the medical room and with the surrounding pieces. The Colts are lost without their leader and cannot make anything happen without him. All of this could have been avoided but it is now the mess that it has spawned to be. Colts fans can thank Irsay for allowing this mess to get to where it is now. 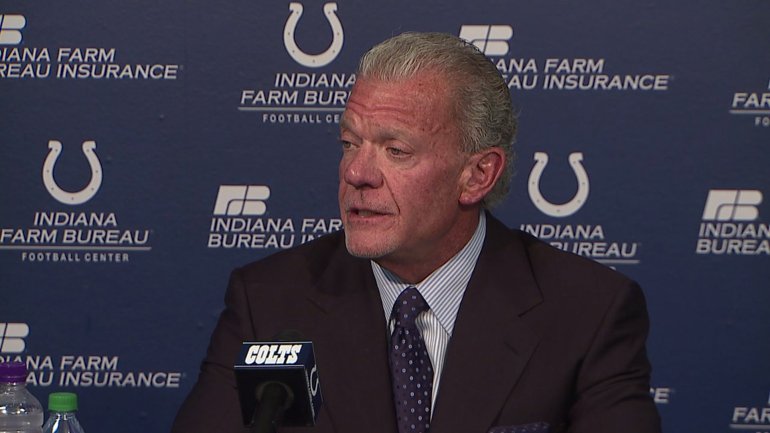