Could This Be The Beginning Of The Las Vegas Raiders?

The Oakland Raiders have been back in Oakland for some time now. The team has been sharing a stadium with Major League Baseball's Oakland Athletics. But that stadium has been falling apart for some time now. There is known issues with the drainage from the stadium along with no updates that have been made. They need a new place to play and it seems the city just does not want to give them one. So with that being said, the Raiders have made a move that may force the hand of the city one way or the other. The Raiders recently filed for a trademark of the name Las Vegas Raiders. As soon as that information was announced Thursday, many began to gasp. Could the Raiders actually move to the desert or were they bluffing to make the city give them new stadium or serious stadium upgrades? Well, it appears the Raiders are serious about this because the trademark was filed with intent to use. But how would this partnership work in Vegas between the Raiders and the city?

The biggest hurdle with any of this will be a stadium. The weather will play an issue in what kind of stadium the Raiders would want. With the heat that is there for most of the year, the Raiders would actually do well to request a stadium with a retractable roof. Having one that can be closed off to the heat and keep the temperature at a comfortable level would be good for the fans of football there. People may love Vegas, but the heat there can be unbearable at times. And not many football fans are going to want to sit outside in that type of heat all day long. Consequently, with the retractable roof, the Raiders would also be doing themselves  favor because there would be perfect conditions pretty much every game. Weather would not play a factor because the Raiders would be in control of the roof and if it was closed or open. The only other issue would be whether or not they want to go with field turf or real grass. Given the place that they would be playing, the best option would probably be field turf or some sort of synthetic grass because it would be tough to keep grass healthy in that type of climate.

The look of the stadium is something that will be discussed, but the first thing is to figure out how the funding will happen. It seems as if every new stadium that has gone up has required the taxpayers to give some money towards it. You wouldn't think that owners who make boatloads of money would need public funding, but they do ask for it so they don't have to come out of their pockets for everything. The reason the Raiders are plotting to leave Oakland is they cannot get any public funds to get a new stadium there or renovations. The city is essentially tapped out from the previous renovations and does not have the funds to do that for the Raiders or any team there. And essentially, if they had the funds, all signs point to them not giving public funds from taxpayers to help get the new facilities anyway. So with that being said, you have to wonder what Vegas is thinking about in regards to bringing the Raiders to town. The people there will have to give some public funds to help build this stadium and there is a question as to whether that will happen either. Many people there are not ok with giving public funds to build a stadium there. They think the NFL and the Raiders should come up with the funds to make that happen. All the while, there is a group there in Vegas that is looking to secure at least $750 million in funding from the city on a $1.9 billion stadium project. So while the issues in Oakland on public funding are there, moving to Las Vegas isn't a certainty because of the uncertainty there with the public funding.

The stadium designs are all out there, but finding a location to secure for building of a stadium and funding are a huge hurdle at this time. But getting the trademark with intent to use is something that let's Oakland know the Raiders mean business.  And along with the Golden State Warriors having a new home built in San Francisco and the Oakland A's being able to opt out of their lease in 2018, it is possible that the city of Oakland could be without a team in a few years. The Raiders moving to Vegas would upset some of their fans, but it is a necessity for them at this point considering the condition of the stadium they share with the Oakland A's. 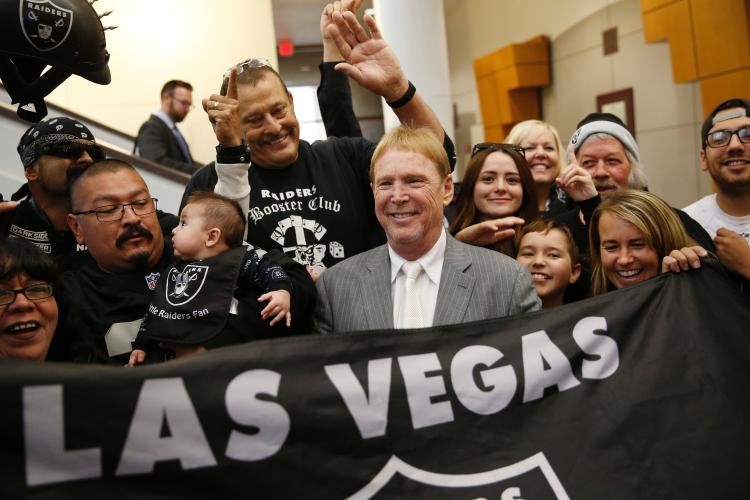