A Rookie Year All Over Again

In the 2015 NFL Draft, there were plenty that were looking for things they needed for their teams. One of those team that was looking for a player was the Chicago Bears. They needed a little bit of everything, but one player caught their eye. Junior wide receiver Kevin White left West Virginia a year early to enter the NFL Draft. He was one that many teams loved and wanted to add to their rosters. But some of teams had other needs that were bigger than White at the time. But the Bears, even though they had other needs, felt White was just too good to pass up. And with the seventh pick of the 2015 NFL Draft, the Bears took him. Immediately their thoughts were that he, along with wide receiver Alshon Jeffrey, would help replace the loss of Brandon Marshall, who was traded to the New York Jets. Just the pairing of those two seemed to have Bears fans excited. But all that excitement about Jeffrey and White ended up being for naught in 2015.

During organized team activities, White was participating and ended up suffering a leg injury. There was doubt that surrounded how serious it was and many began to wonder when he would come back from this leg injury he suffered. Well, the injury ended up being a stress fracture in his leg and he ended up missing his entire rookie season. The Bears were not expecting that at all and it was an obvious blow to their offense. Defenses were able to solely focus on Jeffrey and the offense just did not have enough weapons. Couple that with a defense still trying to figure themselves out and the 2015 season did not go as well as the Bears thought it could have. They finished the season at 6-10 and were nowhere near the playoffs. And White's presence was surely missed, as the Bears expected big things from him last season.

Heading into this season, White can be seen putting in the work he wanted to last season. And the Bears have high hopes for him and what he becomes. Not only is White a big receiver (6'3" and 215 pounds), but he is fast as well. That combination of speed and size will be able to do some things for the Bears offense. Jefferey is a talented receiver, but he is not a guy that strikes fear all the time in regards to his speed. With White in there, he makes the defense take notice with his speed. And in doing so, he can create some opportunities for tight end Zach Miller along with Jeffery underneath. But not only will he help his fellow pass-catchers, but he will help his quarterback, Jay Cutler. The veteran quarterback has always had a receiver of the mold of White. For example, he has had his best numbers to date with Brandon Marshall being on the receiving end of his passes. Of course White is not Marshall, but he definitely has some similarities to him in terms of size and speed. And if White is able to catch the ball cleanly this season, that makes him even more of a weapon due to him being able to outjump smaller defensive backs on the field.That would be something that Cutler would love as well.

White cannot solve all the issues the Chicago Bears have because he does not play defense. But for the offense of the Bears, the addition of White makes them more explosive and dangerous on the outside with their receivers. And as White learns and grows in his position, the good thing is he will get better and better. As he gets better, it will be interesting to see what the Bears do with Jeffery (playing on a franchise tag this season). But one thing that cannot be denied: White could give the Bears a huge wide receiver option to use at will. 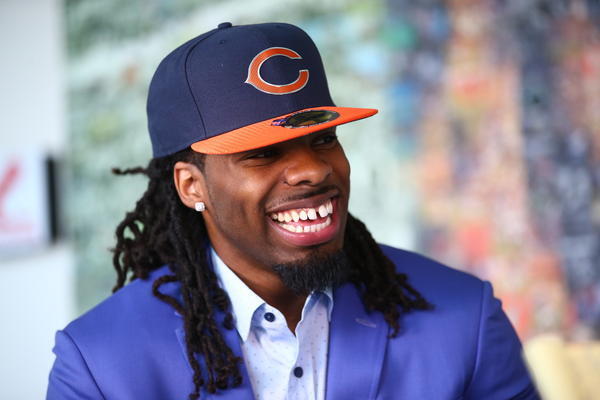