Josh Norman literally came out of nowhere to rise where he is today. Heading to college, he walked on to the team at Coastal Carolina. And over time, he made a name for himself there. He went from being a walk-on to the team to ending his career as an All-American at the FCS level of college football. The Panthers saw the talent that Norman possessed and decided to select the talented cornerback in the fifth round of the 2012 NFL Draft (143rd overall). He started lower on the depth chart like he did at Coastal Carolina, but he eventually rose to be the starter there in Carolina. And going into last season, he proved that he was one of the top cornerbacks in the NFL. Teams did not go his way much and when they did, the completion percentage was very low. And because of that, the area around where he inhabited on the field was called Lake Norman. Receivers would go there if they wanted to, but many of them drowned within his grasp. And now Norman will continue to try and suffocate receivers in DC with the Washington Redskins, as he signed a huge deal with them this offseason. And the Redskins are banking on him being the guy that helps them get ever better next season.

Norman is 6' tall and that is not a short guy. But what makes him even tougher is the athleticism that he displays. Norman, even when out of position, can make some plays that the average cornerback cannot make. For example, it looked like he was beaten for a touchdown when Carolina was playing the Saints at home. But then this play happened:

Check out the leaping ability of  Norman on this one. He essentially laid out and made the game-saving play. And as time has gone on, his understanding of the game has gotten better. Norman has gotten better at understanding route concepts and that has helped him make some plays that he was not making earlier in his career as well. But above all the athleticism and understanding of the game, Norman is a master at getting in the opponent's head. Some may hate it or love it, but when he gets in the opponent's head, he can make them act out of character. Everyone remembers the things he did to Giants wide receiver Odell Beckham Jr last year. The talented Giants wide receiver self-destructed on the field while playing against Norman. And even know it seems that Norman still has a room reserved in Beckham Jr's head. That kind of mental warfare is something that it seems that Norman has learned over time due to him having to fight to get where he is right now.

Norman is no doubt a talented cornerback. And he will continue to make plays wherever he goes. However, he is not a player that is unbeatable. Norman uses his athleticism and makes plenty of plays doing so. But sometimes, he relies on that athleticism a little too much. And when he does that, he can definitely make himself look bad. Everyone remembers the game he got in Odell Beckham's head last season. But what some don't remember is he got beat for a huge touchdown by Beckham Jr to help tie the game. Norman was trying to use his athleticism to guard Beckham Jr and not his technique. And because of that, Norman was toasted. Here is the video:

This all happened because Norman abandoned his coverage skills. And this is just not an isolated incident that he has abandoned his coverage skills. When receivers give him more than one move, he tends to get rid of his coverage skills and goes to backyard man-to-man coverage. And on NFL receivers, that is not going to work. So a quick double-move could have Josh spinning a little bit. But along with that, his technique still needs some improvement. Norman seems to open the door for wide receivers sometimes, especially playing man-to-man. Check out this video of him guarding Pierre Garcon in DC this week:

Notice that on this play, Norman immediately jumps all the way inside. When he does that, he gives Garcon a free run right down the field. And even though he caught up and almost made the play, it is a problem that it even got to that. This has happened in other situations as well. And if he does this when he is playing man-to-man in the games, he could be getting torched like this and that would not be good for Washington.

Norman is definitely a talented guy and will help the Redskins. But he is not unbeatable nor is any cornerback or player in the NFL. He has some weaknesses. And even though he is one of the top cornerbacks in the NFL, he still has some things to tighten up to make himself better without the type of defensive unit he had working with him last year in Carolina. It will be interesting to see if he covers up his blemishes this season. 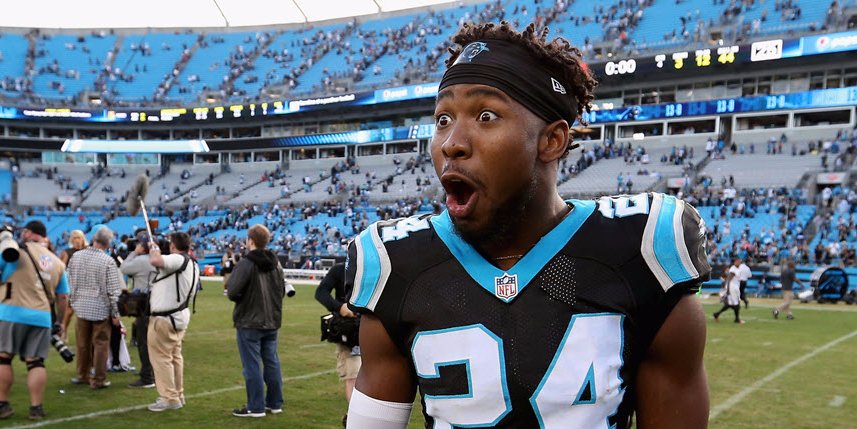