Did The 49ers Overpay For Jimmy Garoppolo?

The San Francisco 49ers were not expected to be any good last season. True to their expectations, they were not very good to start the season and that lasted for a while. Once Jimmy Garoppolo arrived via trade midseason and started playing, that all changed. The 49ers would finish the season on a five-game winning streak courtesy of the talented quarterback. His presence in the lineup seemed to lift the team's play in all phases. All while this was going on, the pricetag on Jimmy G was starting to be found out. Would the 49ers pony up and pay that hefty price that was expected or would they end up letting him walk away. Well, the 49ers thought about it and saw the cap space they had and they quickly locked up what they think is their franchise quarterback. The five-year, $137.5 million deal makes Jimmy Garoppolo the highest-paid quarterback in NFL history on an average-per-year basis. The buzz around the 2018 season for San Francisco is picking up and this signing has made it increase even more. With all the talk of Jimmy Garoppolo, what can we expect from him going into his first full year with the team?

The one thing that was wondered last season when Jimmy got to San Francisco was his grasp of the offense. The main reason that he did not play when he got there was because Kyle Shanahan did not want to rush him out there to play. When CJ Beathard got out there and got injured, Shanahan had no choice but to put him out there. When he did, you noticed the magic he had with the offense. He was moving the football up the field and making some smart decisions with football. Jimmy was doing that without full knowledge of the playbook, so imagine what all he is going to do with an offseason of studying the playbook and learning his teammates. The possibilities are that he could be even sharper than he was last season at times. With the 49ers getting Pierre Garcon back and having deep pockets at their disposal, that could be a scary proposition.

The thoughts of Jimmy being even better than last season is something that could be scary for the opponents of the 49ers. Unfortunately, there is some things to worry about when it comes to this season for Garoppolo. Although Garoppolo only played five games this past season, there is tape out there on him. When that happens, defenses now have plenty of time to decipher what are the strengths and weaknesses of Jimmy G. We may have seen Jimmy play well, but the real test of time with him will be the start of the season when defenses make adjustments. If he handles those changes and is still productive, then there is nothing but great things that could happen for him going forward. If he struggles through the growing pains of defenses knowing him a little better, it will be interesting to watch and see if he makes it out of those struggles and what kind of confidence he has should he survive those rough times.

Jimmy G is the flavor of the month in the NFL to a lot of people and he has done some good things in his short time with San Francisco. With the new contract goes high expectations. The question remains will he be able to meet them or will he wilt under the pressure? 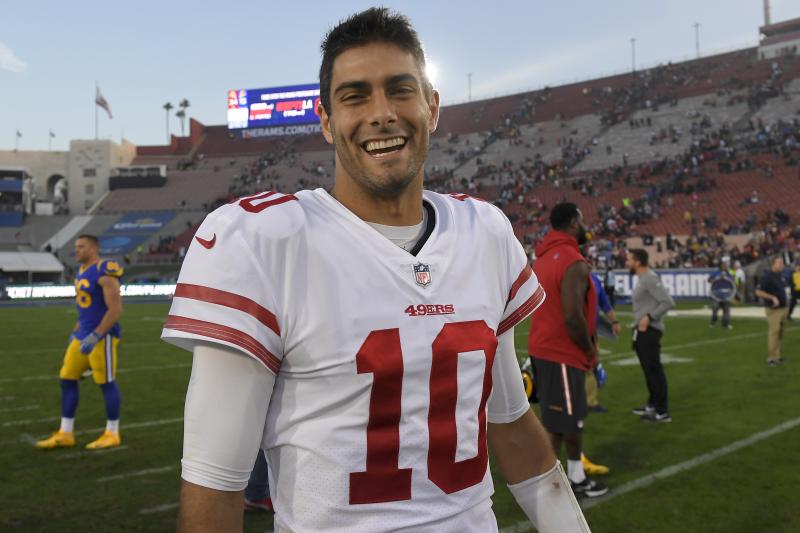