The Comeback Trail Starts For Myles Jack And Jaylon Smith

Myles Jack and Jaylon Smith were both star linebackers in college football. Both got it done in different ways on the field. Jack was more of your traditional linebacker in terms of where he lined up at UCLA. But what was anything but traditional was his ability to cover and his speed. That is what made him one of the most coveted linebackers heading into this past college football season. Smith was not too shabby in his own right, but he did get it done in a different way. Smith was an outside linebacker in Notre Dame’s 3-4 offense. He pressured offenses coming off the edge and he struck fear in every opponent. But both of these star linebackers would have something happen that would affect them and their NFL dreams as well as tie their NFL futures together. Jack would suffer torn anterior meniscus in his knee in September 2015. That injury entailed a 4-6 month recovery process, effectively ending his junior season. Jaylon Smith, on the other hand, had an injury far worse than Jack’s. Smith was playing in the 2016 Fiesta Bowl this past January when he suffered a knee injury that was very serious. And to date, he is still recovering from all the damage that was done, including a torn ACL. Both stars are now damaged goods to many out there that once viewed them as primetime players. But there was someone that believed in both of them Friday night.

In Round 2, both Jaylon Smith and Myles Jack were selected. Smith was picked 35th overall by the Dallas Cowboys. And for Myles Jack, he was selected 37th overall by the Jacksonville Jaguars. Both undoubtedly dropped further than they ever imagined even with the knee injuries, but they both get a chance to live out their dreams. But for one, the dream will be on hold indefinitely. Jaylon Smith is still not healed from his knee injury he suffered. But along with the healing from the torn ACL and MCL, Smith also have nerve damage. That is something that you cannot forecast how fast the nerves will regenerate themselves. And it is because of the knee damage and the nerve damage that it is expected that he will miss the whole 2016 season. It is also possible that he could never play if the nerve damage does not heal enough for him to play. Needless to say, the Dallas Cowboys are taking a chance by drafting him. For a team that needs a pass rusher in the worst way, you wouldn’t think they would have taken Smith as early as they did. But in Dallas, they are counting on Smith to come back and be ready to play as soon as 2017. They could have taken anyone else, but this pick shows that they believe they have made a steal in this draft, which is yet to be determined.

As far as the Jacksonville Jaguars, they landed Jack and that was something that many thought could happen but in the first round and not the second. The knee injury prognosis is a little better for him on the front end, meaning that he does not have nerve damage. But there is longevity concerns about Jack’s career. It was mentioned that he was going to eventually need micro-fracture surgery. Anyone that knows anything about that type of surgery knows that it has taken many careers away. Jack talked about that a day before the draft. Well, Dr. James Andrews, who coincidentally examined his knee, said that Jack does not need micro-fracture surgery. Will he or won’t he need surgery is still up in the air, but the Jaguars are hoping they get this young linebacker on the field as soon as possible. And the good thing for him is they need defensive players, but they are not depending on him to be a main cog for their defense. The players that will carry that moniker will be defensive back Jalen Ramsey, defensive tackle Malik Jackson and linebacker Telvin Smith. He will be able to blend in and maybe get ready to go at his own pace. And he is also joining a team that is in better position than Smith’s Cowboys. But there is also the question as to how many years you will get out of Jack and his career.

All in all, both Smith and Jack have uphill climbs. Knee injuries are not easy to come back from and there are many that don’t. Honestly, if Dallas was smart, they would have drafted someone they could use right now instead of waiting on Smith. But as it stands right now, the Cowboys have an injured pass rusher that they don’t know when or if he will be healthy. Meanwhile, they have two pass rushers in Randy Gregory and DeMarcus Lawrence that will be suspended the first four games and they don’t have a pass rusher they need to help Tony Romo win in his waning years. Jacksonville on the other hand, gets a guy that could add to what they already have right now defensively. If he is not the same Myles Jack or does not get back to where he was, they still will be fine with the players they have already assembled to help their defense get better. Sure, it will be sad if he does not play or play a long time for them, but it is a chance they were willing to take and that could not harm them more as they are currently constructed. Both Jack and Smith never imagined they would be where they are right now. But who would have known that both would suffer knee injuries in their last year of college? Both stars are now out to prove that their knee injuries are a thing of the past and that they can be contributors. Time will tell whether they can or not. 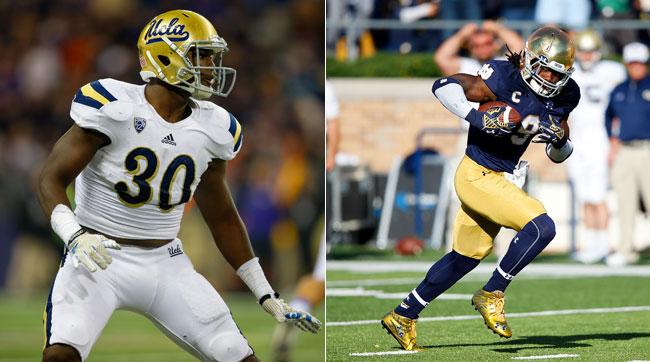