Nick Foles to the Jacksonville Jags

Nick Foles, at one point, was about to be done. He had failed in his attempt to capitalize on his play in Philly under then coach Chip Kelly and was ready to hang his cleats up for good. That's when former Philly coach and current Kansas City coach Andy Reid gave him a ring and brought him in as a backup. From there, Foles has been solid in the NFL and in his return to Philly under coach Doug Pederson, he helped lead the Eagles on an impressive Super Bowl run while replacing an injured Carson Wentz. This season he had some magical performances at times while Wentz was again hurt, but he was not able to lead them to the Super Bowl this time around. However, his play did show to him and maybe some other teams in the NFL that he could be a starter. And with Philly deciding to let him walk as a free agent this offseason, one team has reportedly made the decision to bring him in. The Jacksonville Jaguars and Foles have reportedly agreed to a deal for the veteran quarterback to come to Duval County. 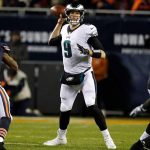 With Nick Foles coming to town, the Jags are hoping he can bring some consistency at the quarterback position. The Jags were hoping the 2018 season was the time Blake Bortles would get some consistency. Unfortunately, that was not the case, as Bortles threw for 13 touchdowns with 11 interceptions. Not only were the numbers not that impressive, but Bortles was still making decisions that he should have grown out of in his fifth year in the NFL. With the addition of Foles, the Jags now have a guy that has shown he can play well in pressure situations. And with the defense the Jaguars have, all they need is a guy that can be steady at the position and Foles proved to be so when he was leading the Eagles to the Super Bowl.  A steady hand at the quarterback position would mean more rest for the Jags defense and when they are able to get regular rest, the Jags can be a handful and then some defensively.

Another good thing when it comes to Foles going to Jacksonville is the offensive coordinator and the relationship Foles has with him. Back when the Eagles were winning 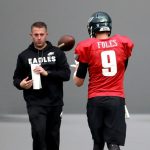 the Super Bowl and Foles was having a magical run filling in for Wentz, their quarterbacks coach was John DeFilippo. After that season, DeFilippo went to the Vikings as their offensive coordinator. Unfortunately things did not work out for him as the Vikings offensive coordinator, but he did find his way to Jacksonville to lead their offense next season. With the familiarity there between Foles and DeFilippo, there shouldn't be any reason Foles shouldn't have success as a Jaguar. The only issue Foles would have to face would be getting used to his new receiving corps. As that relationship grows, things should be solid, or at least better than when the Jags were letting Bortles lead their offense.

The story of Foles going from potential retirement to a now being a wanted free-agent quarterback is a good one to see. Now he enters a situation where he is considered the missing piece for an offense to get back on track.  The first time he left Philly, he left for the St. Louis Rams and that did not go well. This time, he is heading to a better situation with a coordinator he is familiar with. It should be interesting to see how things go as he enters the AFC South.