The Jets Got Hoodwinked By Ryan Fitzpatrick

Heading into the offseason, everyone knew there was going to be a stalemate between Jets quarterback Ryan Fitzpatrick and the New York Jets. After having a career-high 31 touchdown passes in 2015, the veteran quarterback was a free agent, free to sign with anyone he wanted to. The posturing started early and ended late between both sides. And although at one point it looked like the Jets were going to go in the season with Geno Smith as their starter, both sides were able to come to an agreement on a one-year deal. With that, the Jets felt they were set up offensively to make it to the playoffs instead of finishing on the outside looking in. Well, the team may have wanted Fitzpatrick back, but he has been nothing like he was last season. He already is well on pace to throw more interceptions than he did last season and the Jets look like they are done at 1-5. The good thing for the Jets is that he is only there for this season more than likely. But the bad thing is that the hope that Jets fans had coming into this season has quickly been dashed by the play of their offense amongst other things. There are some that are surprised by his play, but if you know his history, you knew this could be coming.

This offseason wasn't the only time that Ryan Fitzpatrick got paid. In fact, he was playing very well for the Buffalo Bills back in 2011. Fitzpatrick started the season as the AFC Player of the Month for September after throwing nine touchdowns and only having nine interceptions. And because of his work to end the previous season and what he was doing for the Bills offense in 2011, the Bills felt like he had himself in line to be rewarded. After all, if he kept up his great play, he would then probably leave their team (Fitzpatrick signed with the Bills in 2009 and was scheduled to be a free agent after the 2011 season). So the Bills did not wait until the end of the year and decided to pay Fitzpatrick in the form of a six-year, $59 million contract extension with $10 million guaranteed towards the end of October 2011.  And as soon as he received that contract extension, his downfall in Buffalo began. Fitzpatrick would go on to throw 17 interceptions in the last two months of the season with only 12 touchdown passes. And beginning the next season, he improved on his touchdown-to-interception ratio but was still very sporadic in his play. He definitely was not the guy they thought he was and he was released in March 2013.

Fitzpatrick's history should have shown the Jets what was coming, but apparently they did not do their history. And after his best season of his career, the Jets just had to have him back and pay him all guaranteed money for one season. Well, they paid for a backup as a starter and they are getting just what they paid for: a backup masquerading as a starter. Fitzpatrick has been missing wide-open receivers, throwing into coverage and has been overall not effective. And as a result of him falling back down to Earth, the Jets as an offensive team look really bad. He seems to inconsistently be able to get the ball to Brandon Marshall and it is only a matter of time before that could become an issue as well. And above all, he seems like he cannot get out of this tailspin just like he could not get out of it in Buffalo. That means either the Jets will be benching him soon or the Jets will continue to look like the big bunch of confusion that they are right now on offense.

Many Jets fans did not want Geno Smith as their starting quarterback to start the year and wanted Fitzpatrick back. But in game number six, there were some Jets fans that got a peak at Geno as Fitzpatrick struggled again. But as it stands, Geno threw an interception and Jets head coach Todd Bowles said he is sticking with Fitzpatrick as the starter next week. The Jets are a mess and offensively it begins with the quarterback position. And unfortunately for the Jets and their fans, there are no answers at that position coming anytime soon. 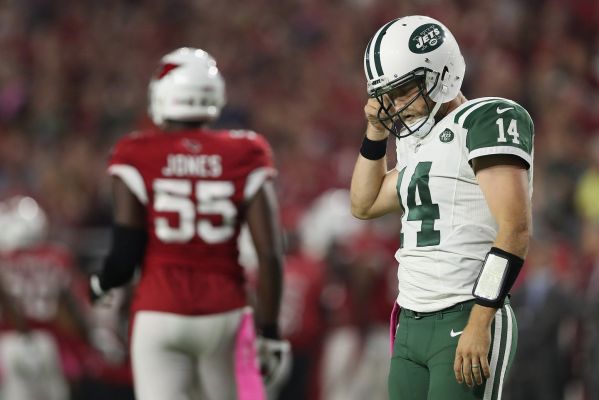