The Learning Process For Ezekiel Elliott

The NFL is a league where you can become a star quickly. One good season has you spoken about by any and every fan that watches the game. Unfortunately, the opposite of rising to stardom is falling from glory. There are plenty players that have a great season only to fall back down to Earth. Ezekiel Elliot was a player that many teams coveted last year heading into the draft. After much wonder where he could do, the Cowboys could not pass him up, as they took him with the fourth pick of the 2016 NFL Draft. Elliot's combination of size, speed and agility intrigued the Cowboys and they were hypnotized thinking of having him behind that offensive line of theirs. Well, their fascination turned into a good pickup, as Elliot was incredible for Dallas, averaging 5.1 yards per carry on his way to rushing for 1,631 yards in his rookie season. With that type of production and the play the Cowboys got from rookie quarterback Dak Prescott, the future looked bright for Dallas. But unfortunately when you have fame, the light seems to shine a little brighter on you off the field. For Ezekiel Elliot, the light seems to be burning a bullseye right on his chest in terms of the wrong kind of attention.

Dallas Cowboys fans and the organization have been waiting on a ruling from the NFL all offseason long in regards to Elliot. The ruling stems from a reported domestic violence incident that was investigated back in 2016. Some thought the ruling was over, but the NFL has yet to close the case. So anyone in that type of situation would probably be trying to keep their nose clean right? Well, news came out on Monday that Ezekiel Elliot was reportedly involved in a bar fight. Details are still sketchy at this time, but there are even reports coming out that he hit a guy and broke his nose along with leaving the scene of the incident. Of course we will not know all the real details for some time, but needless to say, this is not a good look at all for him. The young stud running back was looking at a possible suspension already before this incident and now he just proceeded to make the light shine even brighter on him. Now instead of speaking on the excitement going into next season, the Cowboys have to wonder when Elliot will be seeing the field. For a team that has not put together back-to-back good seasons in a while, this was something that they hoped would not happen.

Elliot has not been proven guilty of anything at this point although there is alleged video of his most recent incident and that video may very well be damning to him in this bar fight. But among the potential trouble, a lesson may have been taught. When you are not as much in the public eye, things are a little easier to get away with. People don't recognize you that much and you can easily slide from one place to the other. When fame kicks in, however, that scenario definitively changes. Gone are the days where you can hide and not be noticed. Along with the days of hiding, the target that once probably was not there has grown to be a bright red symbol of opportunity for the average Joe. Elliot has to know that his star has grown to a new level and unfortunately, he cannot do some things that he used to do. Hanging out amongst the fans or everyday people at a bar can seem not very dangerous to do, but it can be with a rise in fame. There will be some fan or person out there that is ready to test him at each and every time he is out. Does he have the strength to avoid such confrontations? Well at this point, the jury is still out on that. So at what point do you pull yourself out of those situations? Eventually he has to get it and hopefully the day of him finally getting it will come soon before it is too late.

Elliot will be a talented running back in the NFL. But the reality is there are plenty of talented running backs out there that can stay out of trouble. Elliot is young and these types of things can happen in terms of learning lessons when dealing with fame. Hopefully for him and Dallas, this is the last of some of his slipups. The Cowboys almost assuredly want to hear more things written about his exploits on the field instead of hearing about things off of it. If things get too crazy, then you could see the Cowboys putting people around Elliot or even advising him not to go out. The main thing in all this is whether Elliot did or didn't do anything, he must realize the tremendous target he has on his back. If he has another season like last year, that spotlight will get bigger and so will the aim of many wanting to take him down. 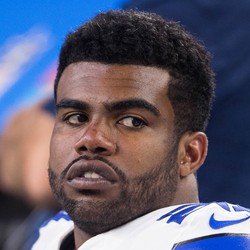