The Eagles Falter To The Struggling Green Bay Packers

The Philadelphia Eagles started the season exceeding expectations. They defeated the Browns, Bears and Steelers to start out with a 3-0 record and they were unexpectedly leading the division. At that point, the Eagles were playing better than many expected and rookie quarterback Carson Wentz was playing very well. And heading into their bye week, expectations for the Eagles were very high. But after the Eagles had their bye week, things have not been the same. Heading into Monday night's game against the Green Bay Packers, the Eagles had a record of 5-5 and were trying to get a win to try and climb out of the NFC East basement. But unfortunately for the Eagles, the Packers came in determined to end their four-game losing streak. And behind the strength of quarterback Aaron Rodgers, that is just what the Packers did. Green Bay came into Philadelphia and controlled the game as they won convincingly 27-13. And just like that, the Eagles have lost four of their last five games and are sitting all alone at the bottom of the division.

The Eagles had some opportunities to win this game. Offensively, they just could not get over the hump though. In the first half of the game, it seemed like everyone was getting involved. Wide receivers Dorial Green-Beckham, Bryce Keggs and Jordan Matthews were involved and the Eagles offense seemed to have some kind of versatility with it. But as the game went on, the Eagles offense became the show of two men: Darren Sproles and Carson Wentz. The Eagles offense struggled to make things happen in the second half of the game, as receivers were dropping passes and the protection up front was breaking down around Wentz. Consequently, the Eagles threw more screen passes and dump offs to running backs like Sproles. At that point, their offense became predictable for the Packers. And although at times the Eagles got some solid plays sporadically out of those screen passes and dump offs, those were not enough to sustain any offense the Eagles were trying to create. The lack of a consistent guy in the passing game has haunted Philadelphia all season long and in this game, it hurt them once again.

But offense was not the only issue the Eagles had in this game. Coming into this game, the Eagles knew the Packers had no running game. The best running back the Packers have had over their four-game losing streak was their quarterback, Aaron Rodgers. And when he was dropping back to pass, the veteran quarterback had been running for his life behind that offensive line. But against the Eagles, it seemed like Rodgers found a comfort zone behind that same offensive line. The Eagles could not get any consistent pressure on him all night. Guys like Fletcher Cox and Brandon Graham were not even evident on the field except for the key penalties that both obtained in this game. And for players that are supposed to be the stars of this defense, they have to bring more than that to the table. With the Eagles pass rush struggling, the Eagles defensive backs were at the mercy of Rodgers. And Rodgers definitely made it happen with that great protection he was afforded. Rodgers was throwing darts all over the field, exposing the cornerbacks of the Eagles all night long. And there was nothing the Eagles defensive backs could even do about it. Nolan Carroll and Leodis McKelvin were getting worn out by the trio of Jordy Nelson, Randall Cobb and especially Davante Adams. These three were doing whatever they wanted against the Eagles defensive backs when they wanted to as they were helping Rodgers go 30/39 for 313 yards and two touchdowns.

The Eagles had some of their issues exposed on Monday Night Football for the world to see. And while the opening of their season was impressive, the reality has set in and the Eagles have some work to do. There are some pieces there that they can build with. And there are others that are there that need to be upgraded. We shall see what happens down the stretch and if they are able to overcome those missing pieces to make a playoff run. But whether they are to make a run or not, this loss definitely hurts the Eagles. 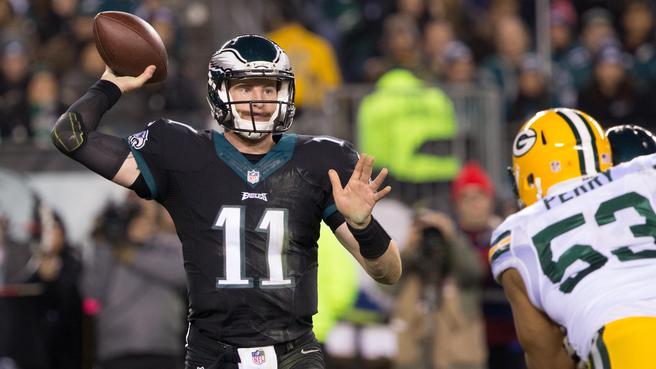