The Denver Broncos won it all last season behind their stingy defense. And with Peyton Manning being the quarterback that led them into the playoffs, many assumed he would retire and Brock Osweiler would take over in Denver. After all, Denver knew what they had in Osweiler after watching him lead the Broncos to a few wins while Peyton was benched/injured. Well, only one of those scenarios happened. Peyton retired, going out with a championship and riding into the sunset. But the other scenario threw the Broncos for a loop. The longer the Broncos gave Peyton Manning to make his decision, the more Osweiler had to think on whether he wanted to return to Denver. By the time Peyton made his decision to retire, Osweiler had thought about how he got benched in the last game of the season for the Broncos. The offense was struggling and he was not even informed he was coming out of the game. Instead, Broncos head coach Gary Kubiak put Peyton in and help Brock on the sideline. Apparently Osweiler never forgot that because he decided to head to Houston, signing a four-year, $72 million deal with $37 million guaranteed. The result of both decisions being made has left the Broncos in a tough position. They brought in quarterback Mark Sanchez to be a quarterback there, but they may not be sure he can be a starter if they need him to. So what does Denver do next?

If the season started today, their quarterback would be none other than Mark Sanchez. The former Eagles backup quarterback was his usual inconsistent self in Philadelphia the last two seasons. He would make a good play with his hands or feet and then turn around and do something inexplicable. If he ends up being the quarterback of the Broncos, then expect them to limit the times they throw the football. Actually, that would fit more into what Kubiak wants. The more he is able to punish teams on the ground the better. But when he has to throw the football with Sanchez, that’s when the adventures begin. Sanchez has had some throws where he has been on the money. And on the flipside, he has had plenty that have been way off target. The bad thing is you cannot predict what kind of performance is coming from Sanchez. And that is not a guy you want to hang your hat on offensively. He may have two good weapons in Demaryius Thomas and Emmanuel Sanders, but he can have a guy wide open and still miss him.

Suppose the Broncos are comfortable with Sanchez leading their team. They will have a guy with playoff experience as a starter. But he will not be the guy that helps Denver make the playoffs. One guy that would be an upgrade over Sanchez is Ryan Fitzpatrick. The veteran quarterback enjoyed one of his best years as a pro with the New York Jets and had them on the brink of making the playoffs. Putting him as the quarterback of this team would instill a little more hope in the Broncos’ defense. But while we can highlight the good he has done, we also have to talk about the harm he can cause. When a big game rolls around, usually you have a player that will rise to the occasion and lead the team. Ryan is that guy that disappears when big games come around, as evident by the finish of the Jets’ season. And if he was to come to Denver, there would be heavy expectations on him due to who he is replacing and the team having a target on their backs from being the defending Super Bowl champions. That kind of expectation would lead to bad performances out of Fitzgerald. And it would also lead to the Broncos missing the playoffs. With the money he is wanting, there is no way that Denver should be seriously considering bringing him in, but they are.

If Denver still does not feel comfortable paying Fitzpatrick or letting Sanchez lead the team, then they could always draft a quarterback. Of course, they probably won’t draft a quarterback in the first round, but there will be plenty of quarterbacks they could bring in to play for them. One quarterback that could be an option in the 3rd or 4th round is Michigan State’s Connor Cook. He definitely has accuracy issues, but he fits the offensive stylings of Denver perfectly. With a running game, Cook is definitely more effective than he is without one. The perfect scenario would be to start the season with Sanchez and then Cook eventually come in and replace him. But even if that does not happen and if they don’t draft Cook, they need someone that can come in and add to the competition at the quarterback position. Cook, for all his indiscretions, could lead a team. And maybe with the new draft pick, some quarterbacks can sit inside while completed my idea.

With whatever decision the Broncos make, it will be different not looking out there and seeing a quarterback with the number 18 running the Denver offense. But all good things much come to an end and so did his journey. The next step in Denver is to find some direction where they will be going with the position post-Peyton. 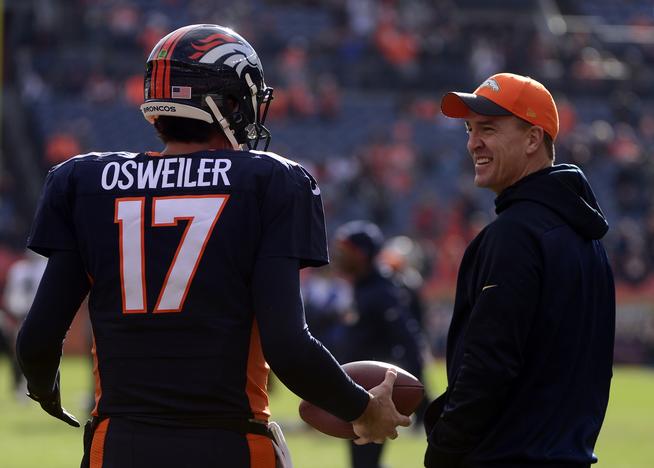