It’s Time For America To Open Their Eyes

The NFL has become a battleground for many fans and some players these days. It all started when San Francisco 49ers quarterback Colin Kaepernick decided to sit down during the national anthem. He had been doing so since the beginning of the preseason but many did not notice what he was doing until the third game of the preseason, which was his first time dressing in uniform. Many did not notice it at first, but after it was put on social media, many began to wonder why he was sitting during the national anthem. And then he went into why he did and explained the reason he would be not standing during the national anthem going forward. Of course, he has been getting crucified on social media by some. He has altered his stance to a kneeling position since talking to Army Green Beret and former Seattle Seahawk Nate Boyer, but the mission remains the same for him. And now he has some company. His former college teammate, Denver Broncos linebacker Brandon Marshall, kneeled down during the first game of the season. His current teammate, safety Eric Reid, and four Dolphins players also kneeled during the national anthem as well this past Sunday. There were also players that raised their fist in the air during the anthem like Tommie Smith and John Carlos did at the 1968 Olympics. The movement does not seem to be going away anytime soon. But instead of trying to understand what the movement is about, there are plenty that still refuse to realize the issue at hand.

There are some people that are hung up on the main action that Colin took to start this movement. The fact that Colin sat then kneeled during the national anthem has some folks irate at him and wishing that he was out of the league at this point. But instead of focusing on the action, there are many that need to listen to the words that Colin said during his speech when it was first recognized that he was sitting during the anthem. Colin talked about being a voice for the voiceless, police brutality issues in this country and how African-Americans and other people of color are treated in this country. But instead of some people hearing that, they are blinded by the fact that he is sitting down/kneeling in regards to the flag and keep saying that he is un-American, unpatriotic and disrespectful. Well, to those that are angry, they may want to realize that standing for what you believe in is what America was even founded on. Protests were a part of this country even being what it is today if you really want to get down to the history of America. And honestly, with him sitting down/kneeling during the anthem, he has shined a light on something that is an issue. Besides, he has freedom of speech to do what he wants to do. He can sit or stand or whatever he wants to do when the anthem is played. And for those that say he is disrespecting the military, he has said that he has great respect for them, has family and friends that are in the military and also that his stand in no way is trying to disrespect them at all.

Along with trying to tell Colin that he is un-American and unpatriotic, the real thing that is disturbing is that the people calling him these things still don't get it. And what makes it even worse is that people don't want to get it either. Plenty have the attitude that "if it does not affect me, then it does not matter". When that type of attitude is threatened, then that is when the anger and defelction ensues, trying to silence a talk that needs to be had. And because of that, this is where we are in America. We have so many people caught up in what they have going on that they cannot step outside themselves and understand what someone else goes through or feels. And to top it all off, plenty have tried to tell Black people and people of color how they should feel about things happening right now in America. One thing you should never do is try to tell someone how they should feel when you have never really taken the time to understand the experience that person has had.  That type of thinking is what keeps this country from progressing more than it has.

Colin Kaepernick has opened the eyes of America. For those that thought America had progressed so much, the reactions on social media has given us the reality that we still have a long way to go. There are plenty of people yelling at Colin and other players, telling them to just play football and that they should be just football players. But people forget that these players are human beings first and foremost and that they are speaking for a cause that they believe in and wanting America to be better. According to those that oppose Kaepernick and crew, football players should be detached from everything else since they are paid and be patriotic no matter what. But these are some of the same people that would probably do the same thing that fans did to President Obama when he came up on the big screen: boo him. Now how patriotic is that to boo our president? Well, for those that want to say that they are using their freedom of speech there, that is exactly what Colin is doing folks. Freedom of speech does not have limitations. 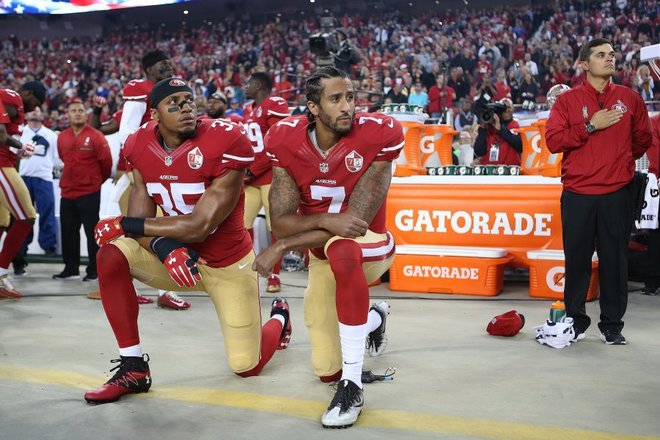