Stand For Something Or Fall For Anything

Colin Kaepernick and Blaine Gabbert have been locked in a quarterback battle for all of training camp so far. The 49ers have yet to name a starter at this point, but Blaine Gabbert had a leg up on Colin since Gabbert had played the first two preseason games while Kaepernick sat out due to his arm and what was classified as arm fatigue. But in preseason game number three, Kaepernick and Gabbert were both going to be active and playing. Gabbert led the 49ers on their only scoring drive of the first half and then Kaepernick came in and played a few series leading into halftime. Some viewed his play different ways and thought that he should have played after halftime to get some more playing time. But instead of many talking about his play and where he stood in the quarterback battle, many were talking about what happened before the game. And because of his actions before the game, the attention has shifted from what he has done between the lines to what he did outside of them.

While the national anthem was playing on Friday night before the Green Bay Packers/San Francisco 49ers game, there was one player that was noticeably sitting down during the anthem. Yes, Colin was sitting during the anthem and there were some that were wondering why he was doing so. Well, that question got answered quickly after the game. Here is what Colin had to say NFL media, "I am not going to stand up to show pride in a flag for a country that oppresses black people and people of color." Kaepernick also had this to say, "To me, this is bigger than football and it would be selfish on my part to look the other way. There are bodies in the street and people getting paid leave and getting away with murder. If they take football away, my endorsements from me, I know that I stood up for what is right." When he said those statements in response to him not standing for the national anthem, the firestorm began. All of a sudden, there were some attacking him for not standing and felt that he should be reprimanded for it. And along with those, there were others that felt he should be worried more about trying to keep his starting job in the NFL. But for those, I got some news for you.

Colin is standing for something that does not involve his wallet or his job. Like he said, this is bigger than that stuff. We are talking about human life here folks and social injustice. Whether or not you like it, Colin is standing for what he believes in. No one has to stand for the national anthem just for the same way that not everyone has to put their hand across their heart for the national anthem either. The thing that gets lost in demonstrations is that people get the notion that the person protesting hates America and that he is disrespecting the military. That is not the case with what he is saying in this protest. He is simply showing his disgust for what has been happening over and over again. In the United States Of America, people can believe what they want to believe. That is what they call freedom of speech. If we did not have that, we would live in a dictatorship. And as far as the military, they fight so we can have the freedom to express ourselves and have no limitations to do so. Again, you can love America and hate some things that happen in it. Kaepernick is simply taking a stand for what he feels is wrong with America and this is the avenue he chose.

But what also is interesting about this stand that Colin is taking is that many people have been asking for athletes to take a stand. There have been plenty asking where athletes were on these issues and why more did not take action or speak out. And now with Colin speaking out, some of those same people are not happy at what he did and that he spoke out. The thing that people tend to not understand is he did not have to run his protest by you. He is going to do his protest the way he wants to do it. And he is doing something that many don't have the guts to do. By saying that he does not care if he loses endorsements and his contract, he is truly immersed in the stand he is taking. And many could actually learn a thing or two from him on this one rather they want to believe it or not.

Kaepernick will be the talk of social media for a while now. And many will continue to criticize him for his actions and his comments. But those that continue to come after him for his stand have still not found the forest for the trees. He exercised his freedom of speech just like those that criticize him have. How are you being any different than he is at this point? And while you're at it, you may want to ask what you are doing to make things better in America? Are you turning a blind eye to the injustices happening or are you trying to make a difference? One of America's greatest athletes was also very powerful in standing for what he believed in. Muhammad Ali recently left us and  he left beloved. But at one point, plenty hated him because he stood for what he felt was right when he refused to serve in the military. Amazing how time helps people understand why a stand needed to be made by him. And Kaepernick is hoping that in time, a stand that he is making will make an impact. 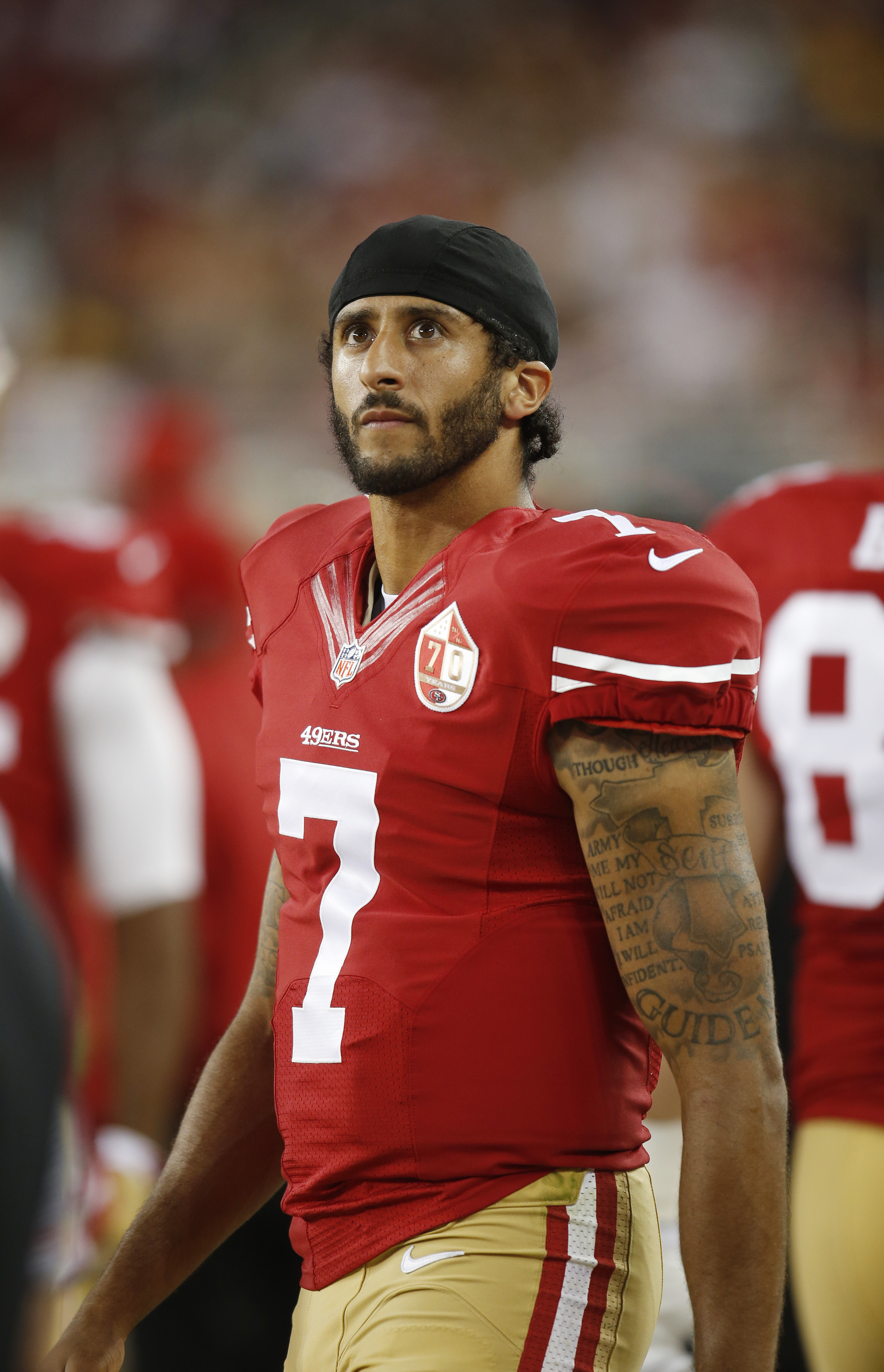