When Is It Enough?

Cam Newton and the Panthers were seeking revenge when they faced the Denver Broncos again. And no matter what they said in the media, the opener for them on Thursday night was a big one for them. And the Panthers came out like they meant business. They forced a fumble on the Broncos' first drive and they turned that turnover into a touchdown. But as the game settled in, so did the Broncos. And late in the game, they took a 21-20 lead that they would end up hanging on to courtesy of Panthers kicker Graham Gano's missed field goal. After the game, many talked about the Broncos winning. But along with that, many talked about one other thing: the brutal hits that Cam Newton took. Many times in the game, he took hits to his head. And most of those were not even flagged on the field. Cam, for his part, did not talk about it much at all after the game. He talked about his team losing more than anything. But this type of thing is not something that should be taken lightly at all.

Take a look at these hits that Cam Newton took Thursday night:

Out of all three hits, only one of them was flagged on Thursday night. In case you did not know, these type of helmet-to-helmet shots are to be flagged each and everytime. In two of those hits, the Broncos defenders launched themselves helmet-first at Cam Newton's head, creating helmet-to-helmet hits. That type of hit is what is supposed to be illegal due to the potential damage that it can cause to players. But what seems to be the case is that officials think because Cam can run around and makes plays at 6'5" and 250 pounds that it is ok that he take these shots. Of course Cam running around makes it a little more difficult for officials to officiate him at times. But in these instances, he was not aggressively running down the field like he was a running back. He was a quarterback trying to make a play. And for officials to miss this type of thing and sacrifice his health is something that should not be tolerated at all.

More than likely, Brandon Marshall and Darian Stewart will be fined for their egregious helmet-to-helmet shots on Cam where they launched themselves and Miller will not get fined. But within the game, all three should have been flagged and were not. It's always our right as fans to play armchair quarterback and review things that could or could not have happened along with missed calls in games. Of course, there are plenty of plays that a bad call happens and you can live with those most of the time. But when the officials are blatantly allowing hits to the head, that is a safety issue. And in an NFL where player safety is supposed to be at an all-time high, these officials failed to do their jobs in a correct manner. And for what they missed in this game, these officials should be fined. Players get fined for doing things wrong, so these officials should as well. Again, I am not saying they should be fined for every single call they missed. If they did that, then some officials would not break even. But what I am saying is that if the NFL wants to send a message of player safety, it cannot be a one-way street. Officials have to take some responsibility as well.

Cam Newton will probably be feeling those hits for a while, as those type of shots accumulate over the season. But the saddening part of this is if this was Tom Brady or a quarterback that is more of a pocket passer, then all these plays would have been flagged. Heck, if these hits happened to Brady there would be plenty of fans screaming for a suspension and the fine would have already been announced for the players involved. But because Cam is an athletic quarterback that can run, it is supposed to be ok or let slide? NFL, step up and start fining officials for these type of issues. Then more people would actually take your player safety concerns more seriously. 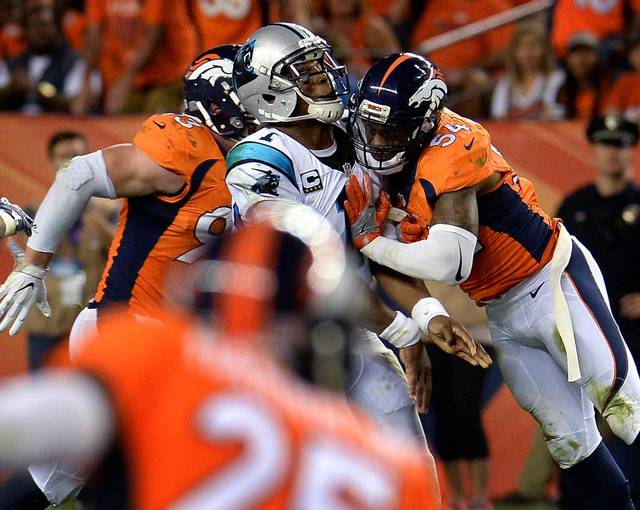 (Photo courtesy of The Charlotte Observer)