The Houston Texans Were Not Ready For Primetime

The Houston Texans had high expectations to start the season. They went out this offseason and paid for replacements to what they had last year. Instead of the revolving door at quarterback, the Texans went out and signed former Denver quarterback Brock Osweiler to a four-year, $72 million contract ($37 million guaranteed). And at running back, the Texans decided they needed a change. Instead of bringing back an injured Arian Foster to try and prove himself once again, the Texans decided to go in a different direction. The Texans went out and signed former Miami running back Lamar Miller to a four-year, $26 million contract ($14 million guaranteed). With Miller and Osweiler, the Texans thought that they found the pieces to take them to the next level. And through two games, the team started 2-0 and were thinking that they were moving in the right direction. On Thursday night, the Texans would have a chance to show the world that they were indeed serious. They were headed to play New England on national television and they could make a statement. The Texans showed up and made a statement on television, but they made a statement that wasn't exactly the one they wanted to make.

The Texans went out and lost to the Houston Texans 27-0 in front of a national audience. What was even worse about the loss was that they were facing a third-string rookie quarterback and had the opportunity to make him look bad. But instead of that happening, Patriots quarterback Jacoby Brissett looked smooth and comfortable. He ran the football well off designed runs and he also made the right decisions when the Texans decided to bring some heat after him. The Patriots also did a good job making JJ Watt a non-factor in this game. In fact, he did not even record a sack or a tackle in the game. For a guy that is supposed to be the best defensive player in the game, that is unacceptable. And the Houston Texans defense should be ashamed of themselves for that performance. In order for them to be taken seriously, the Texans have to be able to beat a team that is considered one of the top teams in the NFL or at least be competitive with them. The Texans were neither on Thursday night defensively.

But let's not let the offense off the hook either. With the new weapons the Texans brought in, their offense was supposed to be more stable and better. But instead of that, the Texans got an offense that never seemed to get off the bus to play against New England. The Patriots confused Osweiler like he was the rookie playing in this game. The big acquisition from Denver never seemed to get settled in until the game was already out of hand. He threw one interception that seemed like he was throwing right into the teeth of the Patriots defense, trying to throw it between three Patriots defenders. And that attempt at threading the needle was intercepted by Patriots linebacker Jamie Collins. For a guy that Houston is paying to make a difference in big games, he disappeared in the big moment. Of course this is one game and he had a bad performance, but the Texans have to be a little concerned because this is his second straight bad performance (threw two interceptions against the Kansas City Chiefs). This game only confirmed that Osweiler has some things to work on.

The Texans want to be considered a top-tier team, but the results of the game Thursday night show that they have a long way to go. Of course, it is still early and the team can still be better, but the performance on Thursday night was completely unacceptable. The defense as a whole has to be better than they were and Osweiler has to be the quarterback they paid him to be. If neither happen, then the Texans will have a huge issue on their hands. It will be interesting to see what happens with them as the season goes on and if they can prove that this bad loss was just a fluke. 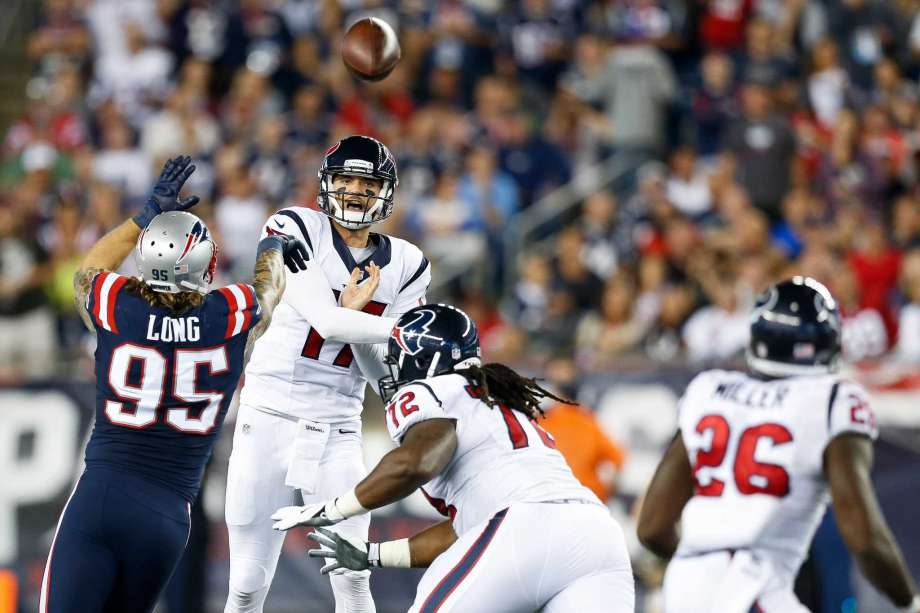