The Pittsburgh Steelers had a season offensively that not many talked about. They played well in some games. But in others, the Steelers came out and struggled a bit. Some of those struggles were due to injuries and things of that nature. And other times, it was due to the players not being on the same page. Well, they played good enough to make it to the playoffs and get a home game in the playoffs against the Miami Dolphins. And on Sunday, their second season started in the Steel City. The Steelers played very tough defensively and even probably overshot the expectations of some of their fans. But on offense, there was no question that they came out ready to play. And with Le'Veon Bell, Antonio Brown and Big Ben Roethlisberger coming out to play their first game all together in the playoffs, the Steelers offense held up their end of the bargain, dominating the Dolphins defense. Pittsburgh coasted to a 30-12 victory against the Dolphins and will be taking on the Kansas City Chiefs next weekend from Arrowhead Stadium. And given the way the Steelers offense is playing down the stretch, I would definitely give them a shot to win in Kansas City. And that shot they have all rides on the backs of the Killer B's.

Big Ben, Bell and Brown are quite possibly the most dangerous trio in the playoffs and they showed it Sunday in this game. Antonio Brown is not the tallest wide receiver. In fact, he is not an imposing figure when you see him on the field. But for what he lacks in size and stature, he surely makes up for it in heart and most importantly, speed. Brown has been torching secondaries since he first arrived in the NFL, but this year he took a step back from his electrifying season of 2015. But even with that step back, Brown still had over 1,200 yards receiving and twelve touchdown receptions. But in this game against the Dolphins, he showed us all he can still be very, very explosive. Brown took a screen pass from Roethlisberger and raced down the sideline for his first postseason touchdown, putting the Steelers up early. And on the next offensive series, Brown came back for more. Big Ben hit Brown on a slant pattern and that was all she wrote, as Antonio took it 62 yards to paydirt, giving the Steelers a commanding lead early. The speedy wide receiver would finish with five receptions for 124 yards and two touchdowns. If he and Ben are in rhythm like this and if he is able to get some assistance from the other receivers, then the Steelers pass game can be a huge problem for the rest of the AFC.

Brown was impressive today against the Dolphins, but he was not the only Steelers offensive player that handled business today. Le'Veon Bell was missing in action earlier this season due to suspension. So with that happening, the Steelers did not get off to the offensive start that they wanted. But once Bell got back and got in rhythm, it seems like the Steelers offense became the machine that many knew them to be. And the engine behind that offensive machine was Bell, who totaled five games of over 100 yards rushing in during the Steelers seven-game winning streak to end the season (totaled 1,268 yards in just twelve games this season). For as many times as the Steelers have been in the playoffs, you would think Bell would have played in a playoff game. But today was his first playoff appearance in the black and gold. And in his first playoff appearance, he took over the game after the early fireworks from Brown. Bell used his patient running style along with his explosion through the hole to carve up the Dolphins defense for 167 yards and two touchdowns on 29 carries. Going forward, if he is able to keep this type of pace up, then that is bad news for the rest of the AFC. That means that you have to not only worry about Brown and the passing game but Bell and what things that can do with you in the running game too. And that makes the Steelers an even more versatile offense.

The trigger man behind this all, Big Ben, has to be loving the offensive talent that is around him. And with the Steelers defense stepping up and playing well, Pittsburgh will be a tough out this postseason. Next up for them is the Kansas City Chiefs, who present their share of challenges for their offense. But with the Killer B's out there making plays and hitting their stride in the playoffs, it could be the Chiefs that are in for some trouble rather than the Steelers. 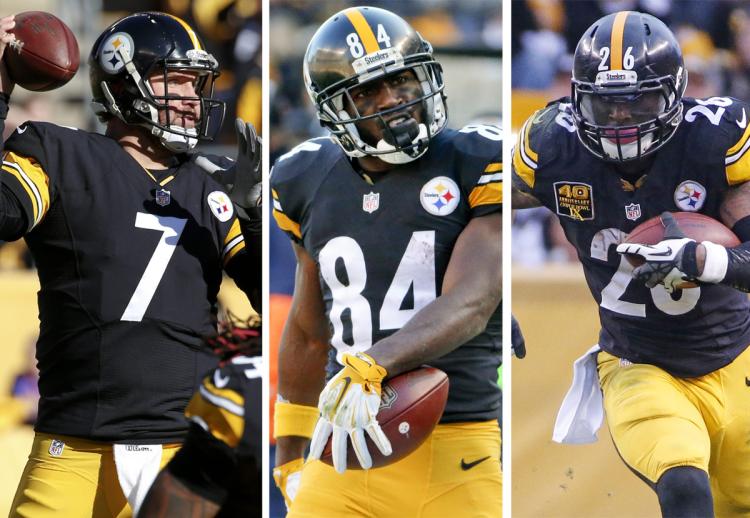