The Pressure Just Turned Up On Andrew Luck

The Indianapolis Colts did not have the season many expected from them last year. After going to the AFC Title game the previous year, many expected the Colts to be even better in the 2015 season. And when they added veteran wide receiver Andre Johnson and running back Frank Gore, the inclination was that they were going for it all. Well, the additions wre not as special as the Colts thought and their defense was not as good either. Along with the vets not making the impact the organization thought they would, their star quarterback did not have that great a season. He was injured, turnover-prone and just generally did not look sharp at all. And because of that, he had his worst season as a professional. But the Colts were not deterred by that at all. They knew that Luck was their franchise quarterback. And despite the bad season, the Colts knew they were needing to lock up their franchise quarterback and do so before the 2016 season. And on Wednesday, Luck and the Colts agreed to an extension. The deal, which is for six years and $140 million, makes Andrew Luck the highest-paid player in the NFL. And with Luck being guaranteed $87 million of the money in this deal (highest guaranteed money in a contract in NFL history), the bar has definitely been raised. And with that bar being raised, the scrutiny has definitely gone up for Luck.

In the past, there were plenty of times the Colts looked downright bad. And because of that, people would get on this team. But one person they always avoided getting mad at was Andrew Luck. It seemed like the media wanted to create a excuse why he looked so bad. Sure, nagging injuries are there, but it seemed like he was just playing poorly. Well, with the money the Colts just invested in him, Luck is now run out of excuses to why he plays poorly at times. He is getting paid like the best player in the NFL and he has to produce like it. With the salary that he now has, no subpar seasons can be tolerated. Last season was a disaster for him. His completion percentage dropped by 6% and he had 15 touchdowns with 12 interceptions along with two fumbles. That cannot happen no matter what is around him. The excuse was that he had no offensive line around him. But tell that to Tom Brady and Aaron Rodgers. Both led their teams to the playoffs despite being under siege all the time behind their offensive lines. And both put up great numbers that were great last season (combined they had one more interception than Luck had all season when he played only seven games). So with the new money that he just got, there is no excuses anymore. With big money comes big responsibilities.

So what can we expect from Luck going forward in regards to his play? Well, we should expect Luck to be like he was in 2014 but better. Luck threw for 40 touchdowns and only had eight interceptions that season. The only blemish on that season was his fumbles (he had a career-high nine of them that season). But the numbers to back up his contract aren't the only thing that we should expect from Luck. With him getting paid like the best player in the NFL, he should also be the unquestioned leader of the Colts now. He has to be the guy that gets his team prepared to play each and every game. And not only does he need to be the leader in that aspect, but he also has to be the player that leads them somewhere and to something. For as much as Luck is talked about as the best young quarterback in the game, he has never led his team to the Super Bowl. Last season was the first time he even led them to the AFC Title game. With the money he is getting paid now, the pressure will be on to lead this team to the Super Bowl. Sure, there are holes in the Colts team, but Luck is being paid to cover those up. It may not sound fair, but it is the responsibility that is thrust upon you when you get paid like he did.

Luck is a very talented quarterback and part of a group of good young quarterbacks. But when it comes to quarterbacks like Cam Newton and Russell Wilson, he is the least accomplished of them all when it comes to their teams. Wilson and Newton have been to the Super Bowl before him (with Wilson going twice). Some can blame it on the team that surrounded Luck and the teams that he faced during his career. But ultimately, if Luck is a transcendent player like he is getting paid to be, then he has to be the difference-maker and lead this team to conference titles and Super Bowls all the time. Luck has been the face of the Colts franchise since Peyton Manning and people have loved him. But after this deal, he will face some of the same criticism Manning received if they don't win a title or make a Super Bowl appearance in the next couple of years. 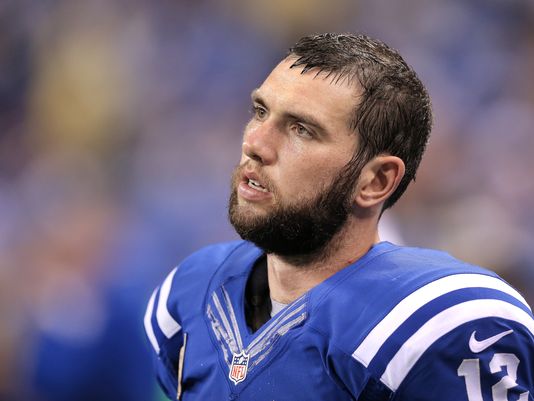