Last season was not what Andre Johnson thought it would be. He requested to be gone from Houston and after thinking it over, he signed with the Indianapolis Colts last season, joining former college teammate Frank Gore on the team. With him signing there, the expectations for the Colts were definitely getting higher. But unfortunately, Johnson, along with the team, did not meet those expectations nor did they even come close. Instead of hoisting the Lombardi trophy they did not even qualify for the playoffs, finishing at 8-8. And just like the teams did not meet expectations, neither did Andre Johnson. Because of his disappointing season, the Colts decided to release him. But Andre was not ready to retire just yet. He still wanted to play, but there was a question as to if anyone would give him a chance. Well, that chance has finally been granted. And ironically, it is another AFC South team that he will be joining.

The veteran wide receiver and the Tennessee Titans agreed to a two-year deal on Friday, bringing the veteran wide receiver to Nashville. With all that he has done in his career, Johnson has a ton of experience at the position. After all, he has played over a dozen years in the NFL and he has been a star at the position. But looking at him play the last couple of seasons, this is not the star player he used to be that the Titans are getting. Johnson looked a step slower in Indianapolis last season. He was not able to get out of his routes as crisp as he used to. And over time in Indy, it looked like he just was not a part of the offense at all. Because of his non-involvement and his lack of getting open, Johnson only accumulated 503 yards on 41 receptions, which was much lower than the Colts expected when they signed him. Now some of that has to do with the issues Indianapolis had at quarterback along with their weak offensive line. But it was clear that age (Andre Johnson was 34 going into last season) and the pounding he had taken in the NFL had caught up to him.

Heading to the Titans, he will undoubtedly bring a wealth of wisdom. After all, you don't make it to your 14th season in the NFL without learning a few things. And with looking at the Titans wide receiver corps, he could add that veteran leadership they need. Looking at the wide receiver position for the Titans, the Titans have a bunch of young guys. Their most dependable set of hands they have, Kendall Wright, missed six games last season and just was not himself. Other than that, the Titans have a slew of guys that are not exactly dependable at all at that position. Being that Johnson will probably be bent on having a better season than he did last year, I expect him to come out with a point to prove this year. And that type of fire behind him could lead him to helping out the Titans in some capacity. His knowledge of defenses and overall knowledge of the game could be a huge asset to Titans quarterback Marcus Mariota. Currently right now, the guy he trusts the most in the passing game is tight end Delanie Walker. But of course defenses will know that and Mariota will need another dependable weapon when he puts the ball in the air. Johnson could be that guy for him.

The Titans are taking a chance on an aging veteran wide receiver who is at the end of his career. He struggled as much as he ever has in his career last season and he may do so again this year. But then again, he will also be playing with a team in need of veteran leadership at the position along with unsteadiness. Even though Johnson signed a two-year deal, there is no guarantee that he will make the roster. If the Titans don't like what they see and want to go with a youth movement (which could very possibly happen at that position), then Johnson could be let go at any time as well. The onus is on Johnson to make an impression that makes it hard for the Titans to let him go. And for two members of the Tennessee Titans wide receiver group ( Harry Douglas and Justin Hunter), things just got a little bit more uncertain with Johnson's signing. 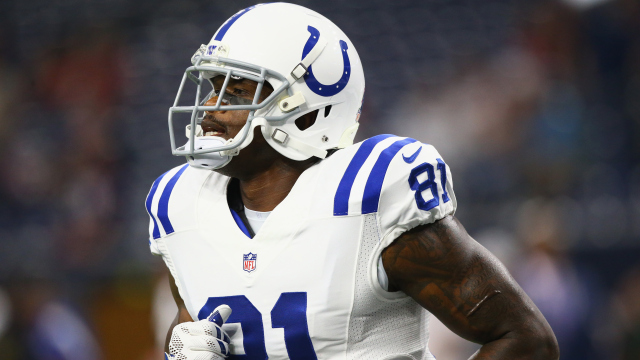