Arkansas Running Back Alex Collins Will Be A Draft-Day Steal

The big name that people keep talking about at the running back position this draft season is Ezekiel Elliot. The former Ohio State running back has captured the imaginations of many with his track speed in the open field and his power. Some have him going as high as number eight to the Philadelphia Eagles. Other than Elliot, the other running back that seems to be getting talked about is Alabama running back Derrick Henry. The former Alabama running back had one supersized season last year and his size and speed have some salivating to get their hands on him. Other than these two, there has not been much talk about any other running backs. And quite frankly, these two will probably be gone by the end of Round 2. But there is one other back that is not getting the just due he should receive. He is not the biggest of backs, but he is definitely one that could get it done in the NFL. His name is Alec Collins.

Some may remember Collins as the kid whose mother would not sign his letter of intent because she wanted him to go to Miami instead of going to Arkansas. The Fort. Lauderdale, Florida native was going to go to the University of Miami before changing his mind and heading to Arkansas. The decision he made was a big one and probably the best one of his life. He rushed for over 1,000 yards in each of his three years at Arkansas and he also totaled 36 rushing touchdowns. And the most impressive thing is he got better with each year running the football, going from 1,000 yards his freshman year to 1,577 yards his junior year. Many wonder how this type of production can be overlooked in the draft. A few different things led to teams not being sold all the way on Collins. One thing that held Collins back is his speed. Alex Collins ran a 4.57 40 time, which was slower than Derrick Henry and Ezekiel Elliot. Both are bigger backs than Collins and ran faster than he did. That simple fact has some wondering whether he can get through holes. Another issue that some have with him is his hands. There is no evidence that he can really catch the football out of the backfield. All Arkansas really did was let him run the football over and over again. Henry and Elliot showed that they had hands at Alabama and Ohio State respectively. In order to be an everydown back, he is going to have to work on his hands if he does not have any.

The lack of top-end speed and a perceived lack of hands are something that scouts don’t like. But Collins does have skills that translate to the NFL perfectly. One of those skills is vision. Collins showed throughout his career that he could read blocks perfectly. And when he read them, he would make the proper adjustment to make it work. And that skill right there is something that most backs do not have and what causes their careers to be shorter than they expected. Having vision can help Collins compensate for being a little slower than the other running backs out there. And in the right situation with the right team, he can use that vision to find holes quicker to make plays. But Collins was not only blessed with vision. He has some quick feet as well. Time after time this year, he was in the hole with nowhere to go, and he made a defender miss. In the NFL, he will be in the same type of situations. And although he does not have top end speed, his vision and push through the hole will help him out.

Collins seems to be a back that many have forgotten about. It’s entirely possible for that to happen given the talents he is behind. But whenever Collins is selected, the team that gets him will get a guy that runs hard, has vision and is quick on his feet. Sure, he is not the fastest guy and is not proven to have the best hands in the world. But he is someone that could help a team and help one immediately. Look for him to go in the draft as early as the second round and as late as the fifth. The range is just that wide for him. Alex Collins is an NFL back folks. All he needs is an opportunity to prove that an NFL teams made the right decision. 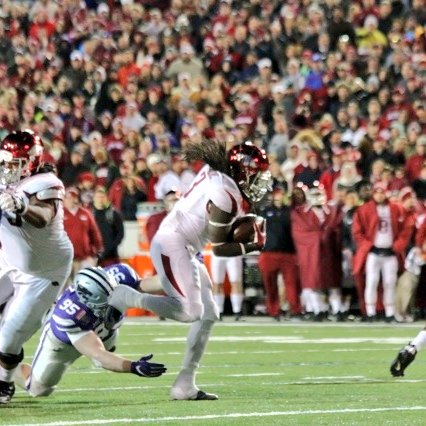