The New Orleans Saints brought Adrian Peterson in this offseason and everyone was excited to see what he could do. The 31 year old running back was let go by the Minnesota Vikings this offseason as they were going in a different direction. Of course when he was signed by the Saints, there were some that loved the move. Those that loved it claimed that he was going to do great things and give the Saints a running game. Just like there were those that loved the move, there were those that hated it as well. The ones that hated the move spoke towards his age among other things as to why he could not be successful in the Saints offense. Well, we are four weeks in and the Saints are 2-2 after winning two straight games that no one even saw coming. Plenty were worried about their defense holding up because they were torched the first two games and every fantasy football player was hoping their offense got to see them. Since then, the Saints defense has been very good, only giving up 13 points in the last two games. While some were worried about the defense, the offense has done enough to win ballgames. Drew Brees and crew are getting it together and unfortunately for Adrian Peterson, it is with him being in a limited role.

So far this season, the veteran running back has not been very impactful on the Saints team. He has not even got over 100 yards for the season with possibly his lowest point in his career production-wise coming Sunday when he carried the football four times for only four yards. Needless to say, things have not gone exactly as he thought they would and right now, he has been taking things a little in stride. The only things that people have to remember him on these days are the dominance of his days in Minnesota where he was a monster in the backfield. With the offense that New Orleans has, he does not fit them at all. He does not catch the football as well out of the backfield as Mark Ingram or Alvin Kamara and he is not as versatile as those two in where he can line up. No one would take Peterson seriously if he was to line up at wide receiver like Kamara and Ingram can. Defenses would shift their defense away from him knowing he could not really run a solid route there. Other than the versatility, the Saints don't really run a traditional offense where one back gets the football anyway and that was shown on Sunday when Ingram and Kamara got most of the work and Peterson was the afterthought.

With Peterson being the odd man out essentially, it's time for the Saints to think on what they want to do with him. If they keep him around, then you risk the chance of him becoming disenchanted with the organization and how he is being used. If that starts to happen, then you have to immediately get rid of him and you lost that chance to get something for him on the open market via trade. If you trade Peterson, then there is definitely some options. While he still probably will not go to a team that will use him as the primary back, he would more than likely be looked at by a team that wants to acquire him as a piece to the puzzle that can be used more than the Saints are using him now. the good thing for the Saints out of this is they can get a draft pick for a mistake they made in free agency. Looking around the NFL, a team like the Green Bay Packers could use Peterson right now. They have injuries to their top three running backs right now and we know that no one ever really gets over an injury until the offseason. All it takes is one injury and he will become more attractive to teams so the Saints can unload him.

Looking at Adrian Peterson in the New Orleans Saints uniform is as uncomfortable as remembering Joe Namath in a Los Angeles Rams uniform back in the day. With that being said, it is time for this experiment to be over. Peterson is like that square peg trying to fit in that circle hole when it comes to him in New Orleans. Kamara and Ingram are the running backs there. Peterson is just the spectator. 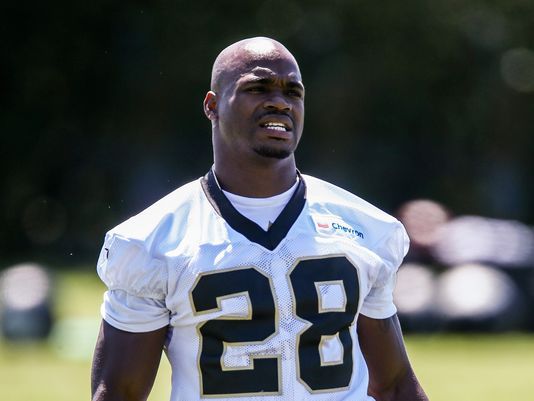