Yi Jianlian Returns To The NBA

The NBA offseason for the Lakers was truly one that some thought was pretty interesting. They had a ton of money and of course many tried to tie their name to that of Kevin Durant. And after Stephen A. Smith talked about him looking at the Lakers earlier in the basketball season, that only ramped up the talk of him going there. But eventually, the real answer came and Durant decided not to come to Lakerland. They ended up signing Timofey Mozgov to be their center. That four year deal for $64 million made plenty raise their eyebrows. Then they signed forward Luol Deng to a four year deal worth $72 million and plenty tried to figure out his fit, especially after they drafted Brandon Ingram to play the small forward position. Needless to say, the free agents the Lakers picked up were not the ones that Lakers fans thought they were getting this summer. But even with that, there was at least some kind of explanation for why they were there that some could make. But with this latest signing, there has to be some people scratching their heads. The Lakers have reportedly agreed to a one-year, $8 million deal with Chinese basketball player Yi Jianlian. And just like that, the former 2007 first-round pick is back in the NBA.

If you don't remember Yi Jianlian in the NBA, then let's take a trip down memory lane. He was drafted sixth overall in the 2007 NBA draft by the Milwaukee Bucks. And when he was drafted, there were many that were not sure that he would even come over to play for the Bucks. He, like Yao Ming, was a heralded player over in China and the thought of him playing in Milwaukee was something that many thought would deter him from coming or have him and his representation ask for a trade. But he did come here to play and played for the Bucks. But unlike Yao, his impact was not as strong. Yao could shoot the midrange jump shot and handle his business inside the paint. The only thing that ended up hurting Yao was injuries and that ended up taking his NBA career away unfortunately. With Jianlian, he was a guy that 6'11" forward that enamored a lot of people because of his ability to put the ball on the ground and shoot the basketball. But when he got into the NBA, he never managed to live up to the expectations that were out there for him. He was not able to use his ball-handling skills as well as many thought when he was drafted and he gave up as many points as he scored and then some. And speaking of his scoring, he only averaged double-figures once in his first time here in the NBA. He ended up playing for the Bucks, Nets, Wizards and Mavericks during his brief career but could never capture the magic that some thought he had. He was out of the NBA after the 2012 season.

Since he has been gone from the NBA, Jianlian has been playing back in the Chinese basketball league again for the Guangong Southern Tigers. And apparently, he has been putting up solid numbers, averaging over 24 points and 11 rebounds during that time. The Lakers were apparently intrigued and decided to give him a nother shot to play in the NBA on a one-year deal. But taking a look at his fit there in Los Angeles, you have to wonder where he fits. Jianlian plays small forward and power forward and that is where the Lakers seem to have a lot of options. At small forward, the Lakers have rookie Brandon Ingram and veteran forward Luol Deng. And at power forward, the Lakers have young players Larry Nance Jr and Julius Randle. So looking at the positions and what they have there, it seems that Jianlian has not fit there at all. The only thing I can think of in regards to a fit there is that he could be the center for them in a small ball lineup. He could spread the defense with his ability to shoot the basketball and that could create lanes for guys like D'Angelo Russell and Jordan Clarkson to drive the lanes to the basket.

Many Lakers fans are probably hoping that somehow this deal does not happen and Jianlian stays in China. But according to most reports, it seems that he is coming to town next year. Jianlian was never a solid player in the NBA before and it is interesting that the Lakers think that he can be a solid one this time around at least for one year. Maybe he can give them a shot in the arm off the bench every now and then, but this move is truly a perplexing one for the purple and gold. 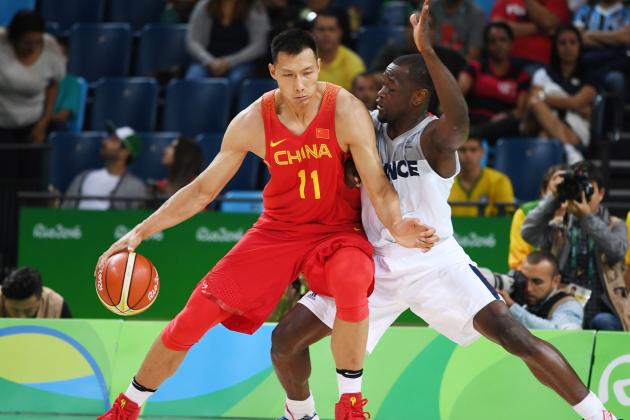