The Wizards Are Getting Diminishing Returns

The Washington Wizards were an exciting young team back in the 2013-2014 season. They had a young backcourt that everyone thought was going to be incredible in Bradley Beal and John Wall, And along with that backcourt, the team had a solid big man in Marcin Gortat. That trio helped them make it to the conference semifinals that season. And the next season, they helped them make it to the conference semifinals yet again. But after last season and the start to this season, the Wizards are struggling mightily. They currently sit at 1-5 and at the bottom of the NBA's Eastern Conference. Washington is trying to make it back in the playoffs while trying to get used to their new coach. Head coach Scott Brooks is in his first year after taking over for Randy Wittman. And at this point, things seem to be a mess. John Wall is doing his usual thing, but that does not seem to be enough for this team at all. As things go on, it does not seem like this situation is going to get any better. So how did Washington end up being this bad?

The first thing that happened with Washington is they bought into the performances of Bradley Beal and Marcin Gortat. Gortat was a free agent in the summer of 2014 and the Wizards had to make a decision. The Polish Hammer, as he is nicknamed, gave them a paint presence that they lacked and he had pretty good chemistry with John Wall. So the Wizards decided to re-sign him to a five-year, $60 million deal. And from there, he has locked in as the starting center of the Wizards for a long time. At the time of him signing the deal, it was thought that his performance on the court would continue to get better (he averaged 13.2 points for Washington in his first year). But instead of his performance getting better, his scoring output has stayed relatively the same and his rebounding has been the same except for the start of this season. Needless to say, the Wizards expected more and got what they got to begin with. As far as Beal, he has been good when he is on the court. The thing with him is he can never stay on the court. Beal has been fighting injuries for what seems like his whole career. And at this point, there are no assurances that he will have a healthy season again. Last season, he missed a lot of time as usual with an injury. And even with him only playing in 55 of a possible 82 games, Beal said that he wanted a max contract from the Wizards. Normally, for a guy that cannot stay healthy, you don't empty the bank. But the Wizards decided that he was still young enough (only 23 years old) and talented enough that they would roll the dice. That gamble turned into a five-year, $128 million deal to keep him in Washington. With that type of money paid, you would think that Beal would be leading your team in scoring and a superstar in the NBA. But with what he has put up so far., he is probably considered a star, but nowhere near a superstar in the NBA. And given his health history, you can almost guarantee that he will get injured and not be the difference-maker that Washington needs. So now they have all this money tied up in these two guys along with John Wall and have nothing to show for it.

But deciding who to sign and who to let go is only part of the process of building a contender there.  The other part of that process is the draft and who you decide to pick up. Over the last four drafts, only Otto Porter Jr. and Kelly Oubre Jr. have actually played for the organization. And what is interesting is they actually drafted Jordan Clarkson in the second round of the 2014 draft (their only draft pick in that draft) and immediately traded him to the Los Angeles Lakers. Three seasons later, Clarkson is a very solid NBA player for the Lakers and is one of their best contributors. As for the guys that are currently playing for the Wizards, Porter was expected to come in and play well for the Wizards. But it took him a while to get into the rotation and finally into the starting lineup. And at this point, in his second year of starting, he is finally becoming a guy that the team can depend on at times. As far as Oubre Jr., he is still finding himself in the NBA. The good thing about him is he has improved his scoring average since last season (from 3.7 points per game to  5.0 points per game). But the bad thing is no one really knows what he is going to become at this point. Now that could be a good thing if he grows into a great player. But it could also be a bad thing if he becomes a player that never develops into a consistent performer for them. These two are considered misses by many so far. If it was not for some veterans that stepped in and produced for the Wizards during the last four years, then Washington would have been in even more trouble than what they were. And this speaks to the lack of evaluation of talent by the front office.

The misses on re-signing players and misses on draft picks have directly affected the success of this team. And plenty of times, it looks like Wall is out there playing by himself for a coach that was saved offensively by the abilities of Kevin Durant and Russell Westbrook in Oklahoma City. All of this screams that there needs to be change in their front office and it needs to happen swiftly. General manager Ernie Grunfield has been in Washington for a long time now and has had many swings and misses. And after being there so long, it is time for him to move on. He is directly responsible for what is on the floor and what is coaching them. And the team will not get any better until he is gone. The Wizards looked so promising a while back. But now they look like they cannot get it right no matter how hard they try. The season is still young, but the Wizards look to be going nowhere fast yet again. 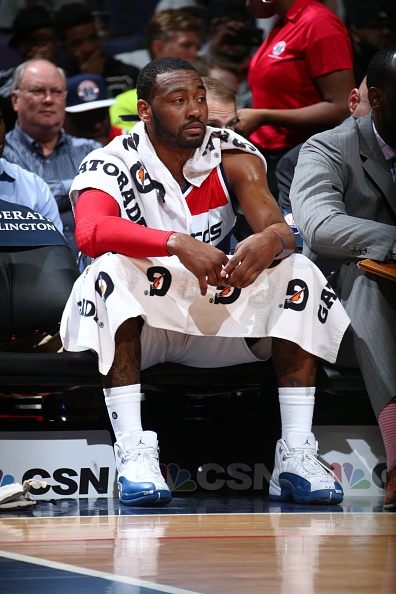