The Russell Westbrook experience was one that many were going to keep an eye on this year one way or the other. As has been well-documented and talked about, Kevin Durant left the Thunder in favor of the Golden State Warriors, leaving Westbrook in Oklahoma City as the lone superstar. The things that people were wondering is how he was going to handle being on his own in Oklahoma City. As the unquestioned leader of the team, all falls on his shoulders at this point. He is the beginning and ending of the success on that team. Well so far, Westbrook is putting up excellent numbers for the Thunder. His current averages are 31.2 points per game, 10.5 rebounds and 11.3 assists per game. Westbrook is the first player since Oscar Robertson to average a triple-double into December. And to this point in the season, many are putting his name in the MVP conversation for what he is doing. But to those that have him up there in that stratosphere, you may want to remember that basketball is a team game.

Westbrook is having an incredible year. Sure, his shooting is down a little and his turnovers are up a little. But those numbers are balanced out with how much he is producing in terms of points and turnovers and the fact that he is going to the free throw line three more times a game than he did last season. But what has changed in those numbers is the meaning of them. As the standings show us currently, the Thunder are fifth in the NBA's Western Conference at 12-8 right now. They have won four straight games so far after last night's win over the Washington Wizards. And if the season was to end right now, they would make the playoffs. So at this point in the season, he would more than likely be the MVP for what he has done. But for the team to make the playoffs and Russell to be the MVP, he is going to need his teammates to step up and be better and more consistent. So far this season, Victor Oladipo is averaging 17 points a game starting alongside him. Other than that, there is no one else even averaging over 15 points a game for the Thunder. And if this stays the course, then the Thunder will eventually fall out of the playoff race. Guys like Steven Adams and Enes Kanter have to play better and more consistently offensively for them to be a playoff team and so far, neither has shown to be consistent on that end of the court.

It's more than likely that Westbrook will not maintain averaging a triple-double all year. But just for the MVP conversation, let's say he does maintain it. If he averages a triple-double and the Thunder do not make the playoffs, he will be in the MVP conversation. But because of his team not making the playoffs, his numbers will not help him bring home the MVP. The MVP award, in my opinion, is as much about individual success as it is team success, which is why you don't see many players ever win the MVP award without having some level of team success. If the Thunder finish outside of the playoffs, Russell's numbers would be historic because he would have done something that only one man has done in NBA history. But for the team success, it would fail on that end because they would have not made the playoffs or achieved some level of success. The award belongs to someone that had success on their own but also had a level of team success as well. If anyone was going to pick a MVP at this point in the season, it would more than likely be the player that left Westbrook to go play with Golden State. Kevin Durant is currently averaging 27 points while averaging a career-high in rebounds and blocking shots better than he has in his entire career. And with the team success, he would be the guy that many would point to as the guy that has embodied what the MVP award is all about to many. Now some may point to Duran's team having a loaded deck. But to come to a championship-level team that was already established and become their best player is not easy to do. Durant has done this effortlessly.

So as it stands, Russell Westbrook may be on an historic pace right and he would be the MVP of the first couple months for what he has done for himself and his team. But for the long-haul, the numbers do not fall in his favor. He has no one really there in Oklahoma City that can consistently average over 20 points to help him and the team is even more offensively limited without Durant there. And even if he is able to keep up the numbers he has so far, the team will eventually fall back down to Earth and out of the playoff race. The team aspect will harm him in the end if he is able to keep up this incredible pace. Westbrook is a great player and will garner some MVP consideration, especially if his numbers stay the way they are. But ultimately the team aspect of that award will harm him. 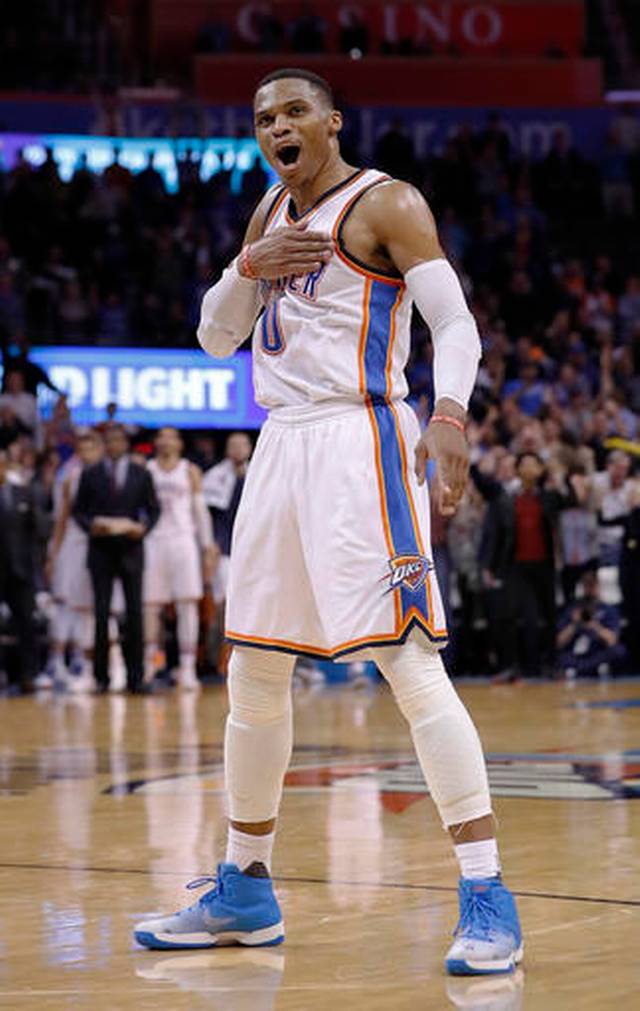