Coming into Game 4 of the NBA Finals, the Golden State Warriors had been in control. Kevin Durant had been magical on the court, hitting big shots, making good decisions and being the star player for the Warriors. Steph Curry, for as much as people talked about his NBA Finals disappearing acts, had been dominating the matchup between he and Kyrie Irving. Curry had been playing at the level he played when he was the unanimous MVP a year ago in the NBA. Following the lead of the last two NBA MVPs, the Warriors were lighting up the scoreboard and stifling the Cavs as well, winning going away in two of the three games. For many, Game 4 was merely the ending to what many believe was an extremely uninteresting postseason. Well, someone forgot to tell the Cleveland Cavaliers that they were supposed to lose on Friday night, The Cavs came out and scored 49 points in the first quarter and 86 points in the first half on their way to their first win in the series. Of course after the win, many began to think about last season. The Warriors were up 3-1 after four games last season and went on to lose the series in seven games to Cleveland, becoming the first team to lose a series when up 3-1 in a series. Sure, some may think the ghosts of the 2016 NBA Finals will haunt them after this one loss. But this is a new season and a new year and because of that, the Warriors only have to make a few adjustments to make sure they don't visit that nightmare from last season.

The Cavaliers came out and punched the Warriors in the mouth in Game 4. They were physical, had more energy and they just played like they wanted it more. The Warriors had been the team that set the tone all series up until that game, but they never really responded or recovered after that initial body blow from Cleveland. What Golden State must do to start the game is come out with energy. With the Warriors playing at home, that should not be an issue. Along with that energy, the Warriors also need to set the tone and not let the Cavaliers set the tone. Instead of taking the physical play from the Cavs, they need to make sure and bring the physical to them. They can do that by boxing out Tristian Thompson, setting bone-jarring screens and making the Cavs the more uncomfortable team. The more they are able to get the Cavs out of their game and take the fight to them, the more control the Warriors are able to have over the game. If the Warriors control the game, then the Cavs would be at their mercy and they will be hoisting the trophy.

Along with answering the physical play of the Cavs, the Warriors need to get back to their gameplan. In the first three games, the Cavs were having players like Kevin Love and LeBron James play well and Kyrie was playing a little spotty. Outside of those three gentlemen, there were no players really showing up on the court. Tristian Thompson was missing in action on the boards, Deron Williams could not hit the broad side of the barn and JR Smith and Iman Shumpert signed up for Habitat for Humanity apparently with as many bricks as they were shooting. The result was three wins that seemingly took all the hope out of Cleveland. In Game 4, the Warriors took their foot off the gas and that resulted in more players getting involved. JR Smith, who started to break out in Game 3 a little, ended the game with 15 points. Along with Smith, Iman Shumpert, Deron Williams and Richard Jefferson hit some shots along with making valuable contributions to the big win. The Warriors have to get back to the original gameplan of locking down the role players of the Cavs. That means closing out to shooters like Smith and Williams, who is capable of knocking down multiple jump shots. What this also means is making sure that the rotations of each defender is as tight as it was before the fourth game of this series.

Last and certainly not least, the Warriors must get Curry back on track. The marksman and magician was lighting up the Cavaliers and anyone they put on him to start the series. He was attacking the rim, hitting midrange jump shots and blinding Cleveland from beyond the arc. But more than anything, he was running free without much contact off screens and things like that. In Game 4, the Cavs went back to the 2016 gameplan, trying to knock Curry around. The result was a subpar game for him offensively, going 4-13 (2-9 from three-point range) for only 14 points. For the Warriors to finish off this series, they need more than that from Curry. They need their point guard to be special in every single way. Curry has to fight through the physical play and be himself, shooting three's from San Francisco and being a wizard with the basketball. With that Steph Curry along with Durant being in a zone like he has been, the Warriors win this series with no problems.

The series is still in the control of the Warriors despite that big win by Cleveland on Friday night. All Golden State has to do is win one game at home in front of their incredible fans. If they answer the bell with the physical play, have Steph be himself and negate the role players of the Cavs, then they will be celebrating in the Bay Area tonight and Kevin Durant will be holding the NBA MVP trophy along with hoisting his first NBA title. If the Cavs somehow figure out a way to win Game 5, then the pressure on Golden State gets heavier and they are wondering what they need to do to finish the Cavs. The decision is up to the Warriors which one they want to be doing after Game 5. 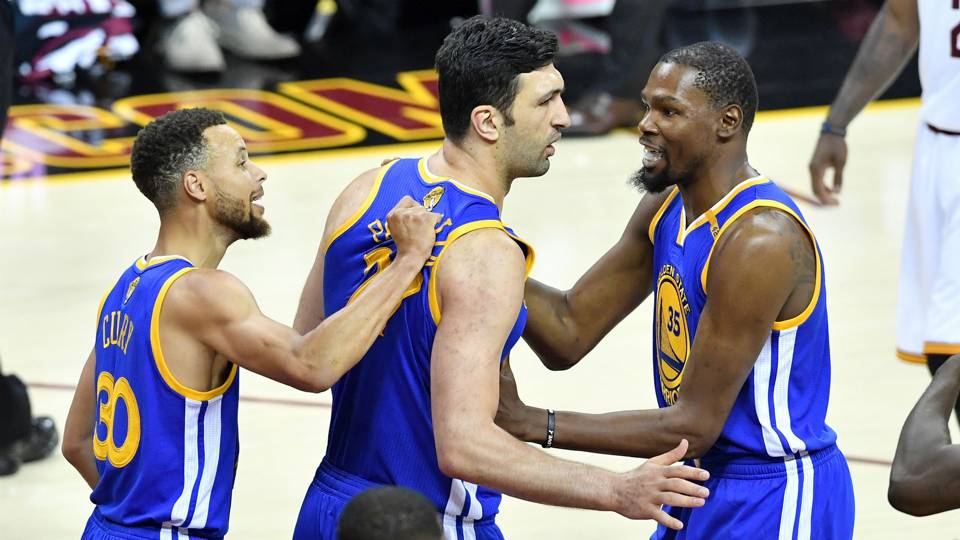