The Golden State Warriors have been living with the results of the NBA Finals all season long. They heard about the loss and wanted to avenge it as best they could. As for Kevin Durant, he has been trying to get back to the NBA Finals since the last time he was there in 2012. Both got their wish, getting back to the NBA Finals. For Durant, he is trying to win his first ring and for the Warriors, they are trying to get payback. What made this matchup even more special is the Warriors would be able to face the team they lost to last NBA Finals, the Cleveland Cavaliers. They got off to a good start in trying to get that championship back in the Bay Area with a 113-91 beatdown of the Cavs. Durant led the way with 38 points, eight rebounds and eight assists and Curry was right there with him with 28 points, ten assists and six rebounds. The Warriors were the team everyone has been watching the entire postseason and they just overwhelmed the Cavaliers and played better. But along with playing better and winning the game, the Warriors played smart basketball.

The Warriors are an exciting offensive team and that is what captures everyone's attention. Plenty tend to lose their mind watching the way they can finish or shoot, but they tend to forget about the careless turnovers the Warriors have been known to have. The Warriors have been prone to make silly attempts at passes that they should not even try sometimes. The result is a turnover and some of those turnovers end up being easy baskets. In this game, the Warriors were the antithesis of their turnover issues. The Warriors had one turnover in the first half and only three in the second half for a total of four for the game. There were no behind-the-back passes and no no-look passes in this one that tend to happen when the Warriors are up by a good margin. Instead, the Warriors continued to play smart basketball and put passes in people's hands instead of the first row or the sideline. If the Warriors continue to protect the basketball like this, then the Cavs could have serious trouble.

Another good thing the Warriors did is take what the defense gave them. Usually with the Warriors, plenty people get caught up in talking about their three-point shooting and how deadly they are from that range at times. The Warriors, and especially Steph Curry, can get happy behind that three-point line and that can be a bad thing for them. But in this game, they did not settle at all for three-pointers. In fact, those that thought that was all they did have clearly not been watching them all season long. The Warriors took what was given to them, which was layups and midrange jump shots a bunch. The result of that, even though they missed some bunnies near the basket, was 56 points in the paint and 45 % shooting from two point range. It just seemed like the offense was determined to give up the basketball for not only good shots but great shots and that is when the Warriors are at their very best.

They always say the offense sells tickets but the defense wins championships and that is definitely true in the championship effort the Warriors had defensively. The Cavs tried a lot of pick and roll with Steph Curry and some of it did actually work. Along with that, LeBron had some action earlier on when driving to the basket. But as the game went on, the Warriors defense got tighter, Curry got more hip to what they were trying to do with him and Kevin Durant was a stud defensively. The result was the Cavs shooting only 35% for the game, which is by far the worst they have shot throughout the entire playoffs. An offense that had not really had any problems all playoffs long just could not find any rhythm and it ended up helping cost them the game. The most impressive thing about the entire defensive effort in this game is the play of Durant. He guarded multiple Cavaliers players and was able to pick up the slack. The scary thing about this game is that Draymond Green was not really as involved as much as he could have been because of early foul trouble.

The Warriors are a team that is on a mission to bring the title back to the Bay Area. If the first game is any indication, they have been ready for this moment all season long. The first win is out of the way and they have three more to go. We all know the Cavaliers will show up next game and play better than they did in Game 1. The question will be for the Warriors if they can keep up the defensive effort, adjust to the things that Cleveland does different in Game 2 and if they can continue to value the basketball like they did in Game 1. We shall see what happens come Sunday. 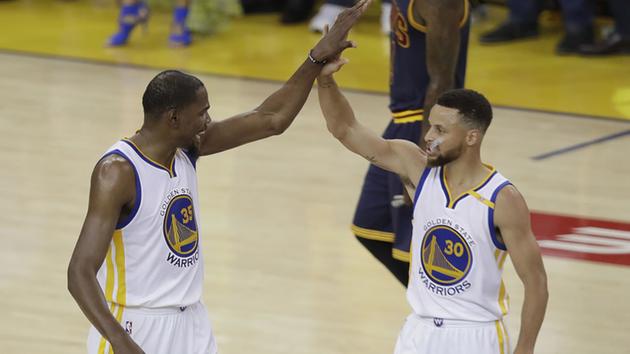