Whose team was it? That was the question that lingered over the Chicago Bulls with the emerging Jimmy Butler and hometown kid Derrick Rose. Last season, it seemed like Butler was trying to be that leader for the Bulls. And unfortunately for him and the Bulls, it was not as successful as he wanted. The Bulls did not make the playoffs. And along with that, the transition to new head coach Fred Hoiberg's system was not as smooth as the organization felt it would be. Add to that transition that Butler and Hoiberg reportedly bumped heads and that made quite an interesting scene in Chicago. Needless to say, things were not looking great in Chicago as the season came to an end and plenty wondered what would happen next. Well, the Bulls took away one question from last year. They traded Derrick Rose to the New York Knicks for center Robin Lopez, point guard Jose Calderon (since traded to the Los Angeles Lakers) and point guard Jerian Grant. Things were looking to be all about All-Star Jimmy Butler until the vets were brought to town. And by veterans, I mean the likes of point guard Rajon Rondo and Dwyane Wade. Both were brought to town by Bulls management and there were plenty that wondered what direction the Bulls would be going in and more importantly, who's voice this team would be following. Well, Dwyane Wade put that to bed really quickly.

In his press conference when being introduced officially as a Chicago Bull, Wade took time to address the question about who's team it was. "We're not going to go through this all year," said Wade. "This is Jimmy Butler's team. Myself and Rondo are here to bring what we bring as athletes." Wade would go on to talk about how Jimmy Butler wanted him to come to town and how he personally reached out to him. The feeling that many had when Wade came to town was that he would assume leadership of this team. After all, he has more championships than anyone on the Bulls roster and he of course has more playoff experience than anyone. But in having all that playoff experience, he also has grown and learned over time. He has learned that he does not necessarily have to be the dominant voice in the locker room in order for his team to succeed. Remember in Miami when the Heat won two titles with he, LeBron James and Chris Bosh? Those two championships may not have happened if Wade would not have taken a step back and allowed LeBron James to lead that team. But in order to obtain the title, Wade knew what he had to do. And he put his ego to the side and let LeBron be the leader of the team on the court and off it sometimes as well.

We all know Jimmy Butler is not LeBron James. But the way that Wade is speaking, he will let him lead like he let LeBron lead in Miami. But along with letting Butler lead, Wade is also going to do what he probably did privately in Miami. Butler struggled at leading the team last season and reportedly received some blowback from his teammates in the locker room. Wade, being that he has been there before, will be able to show Butler a few things when it comes to leading a team. And unlike the combination of he and Rose on the court, Butler will probably be more willing to listen to Wade and what he sees and points out to him. In the long run, that veteran voice in Butler's ear will allow him to grown not only as a player but as a leader. And when that growth happens for Butler, then he will be able to lead the team in the way it is supposed to be done. Instead of guessing what things to do, Butler will be more assured and assertive based on what Wade will be able to teach him.

Wade coming home to Chicago may not have the same type of feeling of Rose when he was taking the Bulls to new heights, but his impact could be very beneficial. Along with giving the Bulls another scoring threat, he also provides a veteran voice that has won at the highest level. And he also brings a listening ear and a teacher for Butler in the ways of leadership. No one knows the relationship Rondo will have with Butler,  but we do know that Wade and Butler's relationship will be one that could impact this team not just this year but in the years to come. 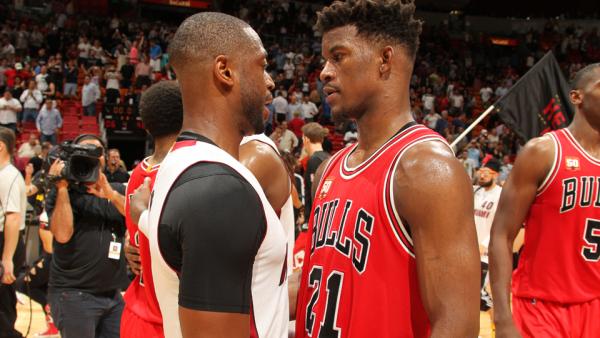