The Toronto Raptors and Miami Heat both won a game against the Toronto Raptors in Game 2, but the worry was still there about their backcourt. DeMar Derozan and Kyle Lowry were both still struggling from the field and not helping their team win games on the offensive end of the court. Honestly, if it was not for Jonas Valancuinas in the fourth quarter and overtime of Game 2, the Raptors would not have been heading to Miami with the series tied at one game apiece. But nevertheless, the Raptors were headed to Miami to get a win in Game 3 and still waiting on their backcourt to show up together. Derozan showed some signs in Games 1 and 2, but Lowry was still missing in action, often passing up shots. And in Game 3, he was missing shots and did not look like himself to start the game. But in the second half, it seemed like we saw the same Kyle Lowry we have been waiting on. He scored 29 or his 33 points after the half while leading the Raptors to a road win in Miami. The win now puts the Raptors in the driver’s seat against Miami. But unfortunately both teams will be dealing with injuries to their starting big men going forward.

Most of the game was missed by Heat center Hassan Whiteside. He was getting in position for a potential offensive rebound when his knee was collided with by teammate Luol Deng in the first half of the game. As a result, Whiteside went to the locker room with a sprained knee and did not come back. His loss was definitely felt immediately. Whiteside was already getting beat up inside by Valanciunas, but without him it seemed to be even easier for Valanciunas to dominate. The big man from Lithuania went to work on the boards and in the post on the Heat’s veteran big man Udonis Haslem. At halftime, he ended up having 16 points and 10 rebounds, causing all kinds of problems for the Heat. But also without Whiteside, there was not deterrent at the rim. Aside from one blocked shot at the rim by Josh McRoberts against Valanciunas, there was really nothing else that kept the Raptors from the rim. They could essentially penetrate anytime they wanted. And with that penetration available, the Raptors could make some moves toward the rim, ultimately kicking the ball out to shooters like DeMarre Carroll and Patrick Patterson. The loss of Whiteside could cause some serious issues for the Heat, especially defensively. But they could definitely still win the series without Whiteside.

But the Raptors were not able to escape injury in this game either. Valancuinas took a tumble after trying to contest the shot of Miami guard Dwyane Wade. The result was a sprained ankle for Valanciunas that knocked him out of the game. Without him, the Raptors really had no inside game. Bismack Biyombo is a hard worker inside, but he has no post game and is a liability at the free throw line. And as far as Luis Scola and Patrick Patterson, both of them shoot more jump shots than they do post moves. Patterson hit some shots, but Scola had been out of the rotation in this game. He had to play in Game 3 and he looked very rusty, missing all his shots and looking really rusty on the defensive end of the court. Without Valancuinas, the Raptors would be missing their most consistent player on the offensive end in this series. On the defensive end, Valanciunas was solid, collecting rebounds inside. When Whiteside was out there, he was keeping him off the offensive boards and making things easier for the Raptors on that end of the court. The fact of the matter is he has outplayed Whiteside this entire series and was giving the Raptors a huge advantage there. Without him, the Raptors can survive defensively, but they need him on the offensive end of the court for his consistency.

Dwyane Wade and Kyle Lowry were both essential to their teams Saturday night in Miami. But the Raptors were able to make more plays to win the game. Heading into Game 4, the Raptors and the Heat may be without their big men. Their absence makes this a battle of the backcourts. And with Lowry showing up on Saturday night, the Raptors’ backcourt should be up for the challenge of taking on Wade and Goran Dragic. The power of both backcourts will definitely take on more importance now. And it will be interesting to see who shows up down the stretch of this series. 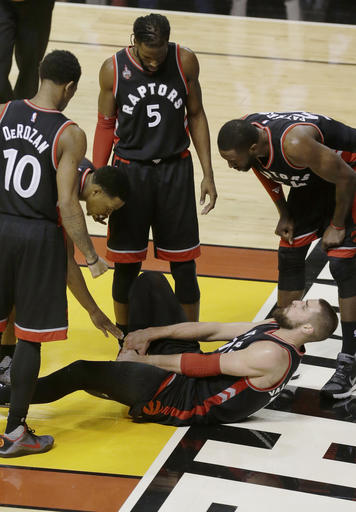