The Cleveland Cavaliers headed into Game 7 with questions that needed to be answered. LeBron James had been excellent all the way through the series on the offensive end, but no other teammates of his had shown up consistently besides him. And on defense, the Cavs were just as bad as they were during the entire season. Add the fact that James will be a free agent this summer and there was added pressure to win the game. Well, James came out and had a big game and the Cavs won the series. Everyone expected James' big game, but no one expected Tristian Thompson to start and become one of the big stars of the game. The veteran big man got the surprise start and gave the Cavs 15 points and 10 rebounds. Thompson is not a reliable scorer and these numbers may be above what he would usually produce, but if they want to win, he has to be a part of the lineup.

Offensively, the Cavs did not have a physical presence. Love was playing center and it was obvious he was out of his element playing there. Moving him back to power forward was a good move for him, as it allowed him to stay away from getting banged up in the paint and it also allowed him to have better matchups for his skill set. As for Tristian, he set the tone for Cleveland on the offensive boards, inhaling basketballs off the rim and giving the Cavs multiple chances offensively. Along with his offensive rebounding, he also gave the Cavs a physical big man that would finish at the rim or at least attack it consistently. We all know Thompson is not the most polished offensive player, but his aggressiveness is something Cleveland needs out of a big man because they have no other big man that rolls to the rim as much as Thompson does.

Along with his presence offensively, Thompson showed up on the defensive end as well. The biggest issue Cleveland has had all season is their rotations defensively. It has cost them over and over again this season on their way to being one of the worst defensive teams in the NBA. Adding Thompson to the starting lineup provided a guy who was versatile defensively. Many times you could see him taking on Darren Collison off a pick-and-roll situation and handling him while he tried to exploit him guarding him on the perimeter. Thompson not only provided that defensive versatility, but he also was tight on rotations and communicated. He often was seen pointing out things defensively or communicating a switch defensively. And the most memorable play on his tight defensive rotations was when he came over to help LeBron and blocked a shot at the rim. The Cavs need that type of defensive presence and they quite honestly looked better defensively when Thompson was out there.

No one will ever know what goes through the mind of Ty Lue as head coach of the Cavs, but he pulled the right string today putting Thompson in the starting lineup. Hopefully going forward, he will keep Thompson in there to help settle things more offensively and defensively. He does not have to score, but his presence does help the Cavs win basketball games and that is what it's all about. 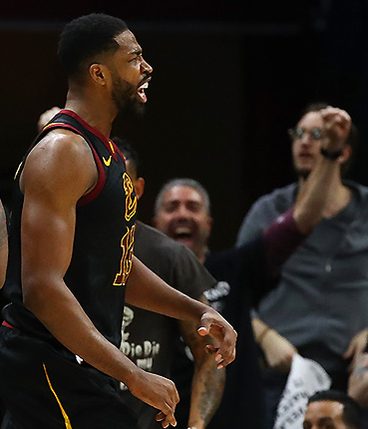